Foxtrot, Edna, Tony and Rhianna take cover behind the barricades as a swarm of zombies heads down Main Street. They're the last line of defence against the undead horde.

Some of my reader(s) have been wanting to see all my MDF buildings set up, so today I finally got around to it. I had a lot of fun doing this, and by "fun" I mean "oops, broke another one" as a few zombies and survivors succumbed to injuries caused by falling onto our kitchen table. The buildings and minis are on a large piece of black cardboard because my game mat is way too 40K to pass as smalltown America or Britain so things are a tad cramped, but I did my best.

After getting all the figures I needed out of their display cases I realised I have a lot fewer zombies and a lot more survivors than I thought. Still, I have enough undead shamblers to do some serious damage to the humans, and that's what matters. There's a lot of links in this post as I thought I may as well link back to the original posts written when I painted the figures.

I didn't get as many pics as I should have because I'm an idiot, and thanks to the lack of space it was a lot easier to use my phone than the DSLR, so apologies for the crappy photos. 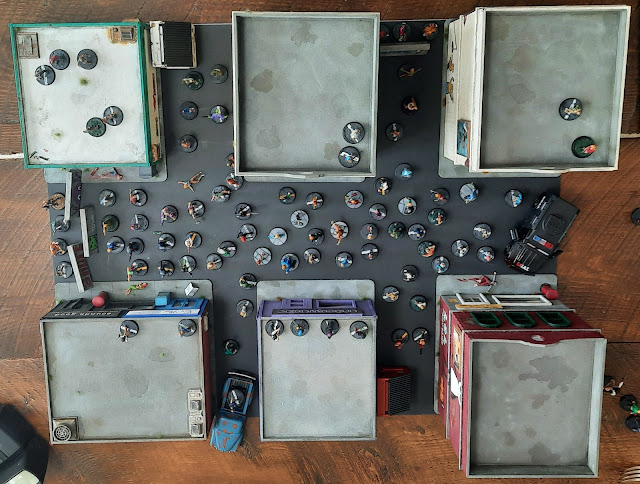 Here's an overview of the town. From top left are the convenience store, La Petite Sourie and the offices of The Chronicle. Along the bottom are News Plus/Sounds Good, Underwurlde and Dogs Trust.

The right end is blocked by some barricades and the left by a blood-spattered SWAT vehicle. The zombies are coming in from the left, and the humans are all over the place trying to wipe them out. 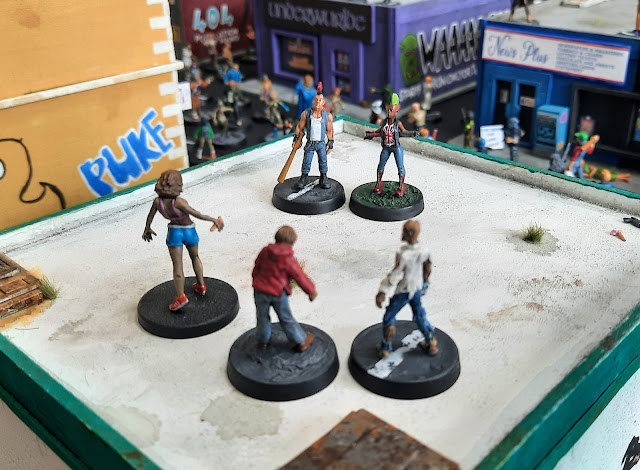 Baseball bats at the ready, Joe and his girlfriend Joanne nonchalantly wait for three zeds to make their way across the roof of the convenience store.

The horde of undead, including a police officer, a maid and small child, head towards the sound of battle, which promises fresh brains for their everlasting hunger. 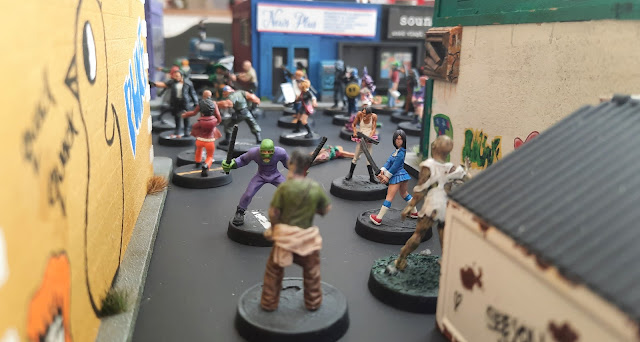 Aaron and Suzi get ready to whack some skulls while Roberto waits with his shotgun (and tutu) just in case they fail. 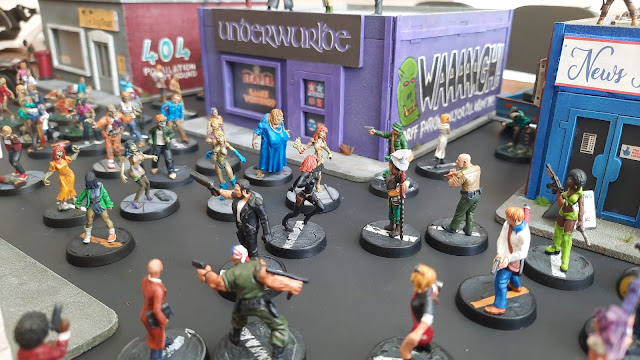 The middle of the battle. In the centre, Natalia legs it before the undead get too close, while next to her Rex takes aim with his shotgun. Maika waits with her usual cockiness to get swinging with her Flammenschwert and behind her, Ken readies to open fire.
At the corner of Underwurlde Lazarus takes aim and Astrid turns to face a zombie shuffling up the alley.

In the foreground, Destiny, Dr Zander and Terrell prepare to fire, while to the right, Lisa, Barney and Cleo prepare themselves in case their friends fall to tearing nails and teeth. 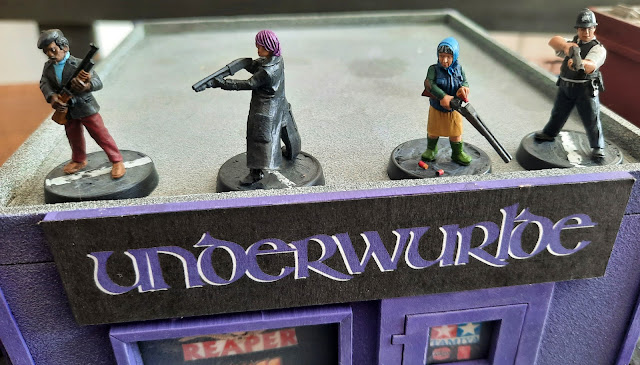 Armed with shotguns, heavy hitters Darius, Dakota, Madge and Sam blast away from the roof of Underwurlde. 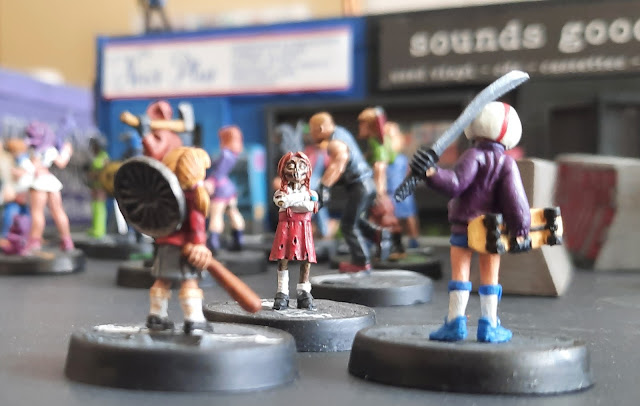 Katie and Amoy team up to take on Mackenzie, who tormented them in school. 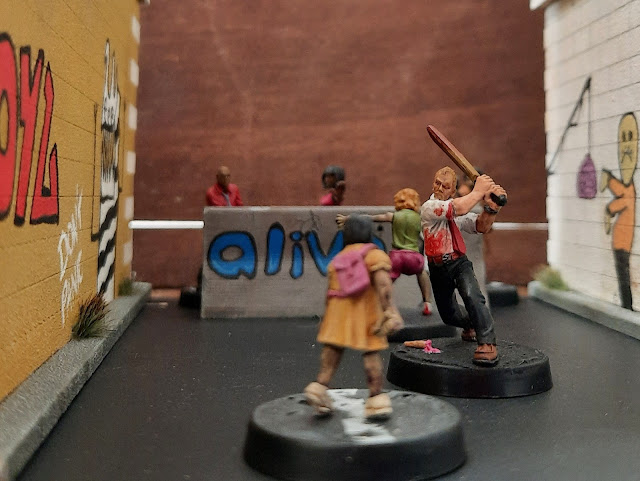 Ray runs in to take out a diminutive zombie while Earl, Pam and Calvin take aim at one who slipped past. 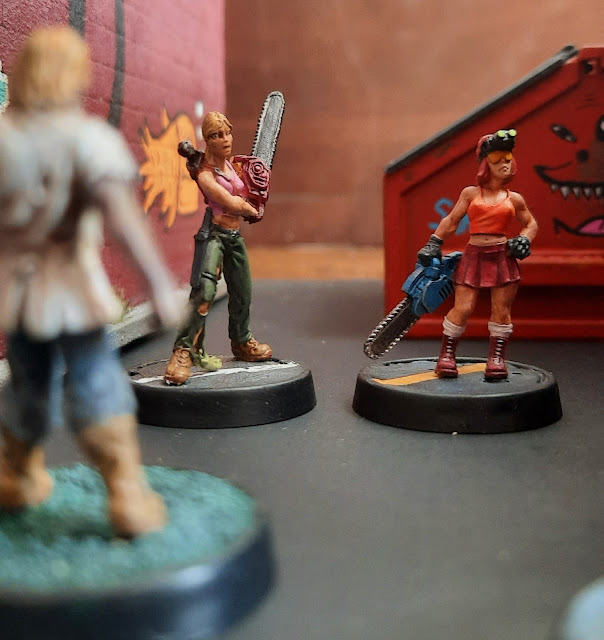 Chainsaw chicks Berkely and Louise rev their weapons as a zombified Luke staggers towards them. 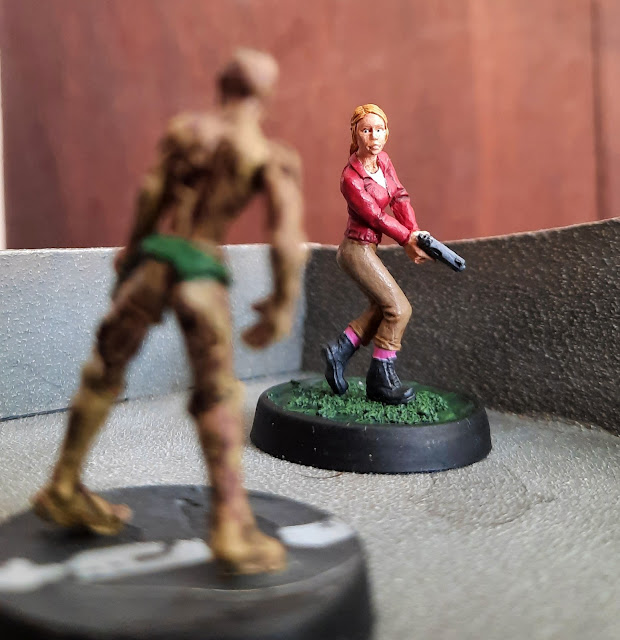 Up on the roof of The Chronicle, Taylor suddenly realises she isn't alone.

A trio of zombie strippers along with Suzi, Elise and Bonnie move closer to the meat. 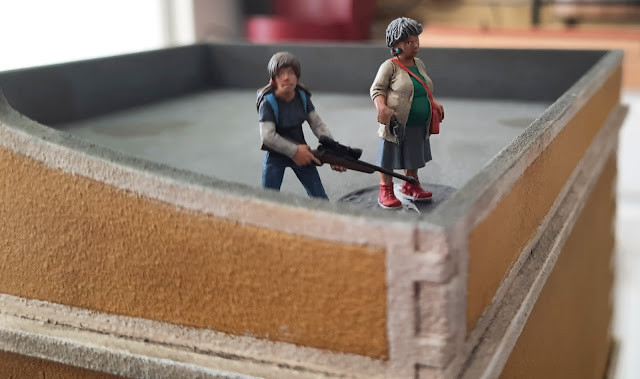 Beth and Carol keep an eye out from the roof of La Petite Sourie.

So that's Zombietown so far. I need to get a bigger gaming mat, or maybe just make my own road tiles, and a couple more buildings would be cool. Other things that would help include better lighting, not having the living room/french doors/Keurig in the background, and a new tripod as I accidentally broke Alicia's. But hopefully this gives an idea of the setup.