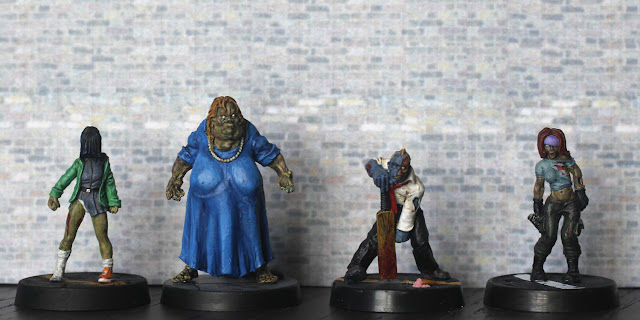 With all the zombie hunter posts I've been doing, I thought it was about time I posted some of the zombies they're hunting. 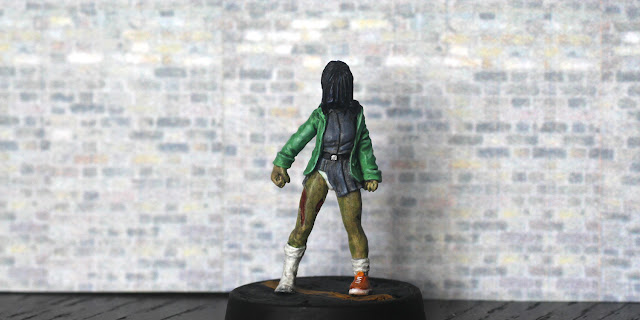 Suzi is a Japanese schoolgirl whose classes included history and art but didn't include "Zombies, and How To Avoid Them," which is a shame as it would have come in very handy a few days ago. At least now she doesn't have to worry about history and art any more. She's too busy looking for the next meal.

You might have seen Hasslefree's Suzi in a previous post, so I won't bother with the painting details here (and there was much rejoicing). I'll give sculptor Kev White credit for adding some darkness to his sculpts; she has scratches down the outside of her right thigh, and a bite mark on its inside. 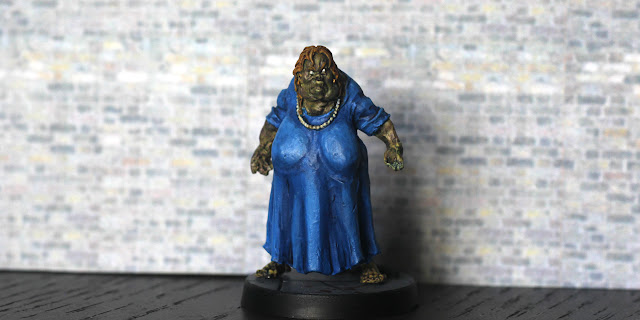 Bonnie used to like nothing more than gameshows and chocolate cherries, but that all changed one summer's evening. Nowadays, chocolate cherries don't have the same attraction as ripping into living bodies and enjoying their gooey insides.

Reaper's Muumuu Zombie is a hefty chunk of metal; put her in a sock and you could use her to mug someone. I painted her in Vallejo Magic Blue, highlighted with a mix of Magic and Electric blues. She has the usual Dead Flesh/Purple Ink/Green Ink skin tones. 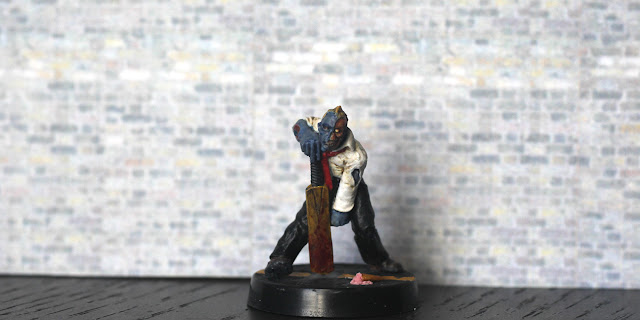 Ray thought a cricket bat would keep him safe on the zombie-infested streets of Norf Lahndahn, but he was proved wrong in so many ways. Now Ray hangs around outside his favourite pub, a dropped Cornetto forever out of his reach.

Hasslefree's Zombie Ray is what might have happened to the eponymous character in Shaun of the Dead if the Army hadn't shown up at the end. For some reason I decided to go for blue skin on Ray rather than my usual method of dead green with green and purple washes. I'm not entirely sure it worked... he looks a bit like a zombie Smurf. Nevertheless, this is a great sculpt, especially the half of his head that's had the skin torn off. Once again, the Cornetto is made from the end of a toothpick, some modelling paste and Vallejo Carmine Red. 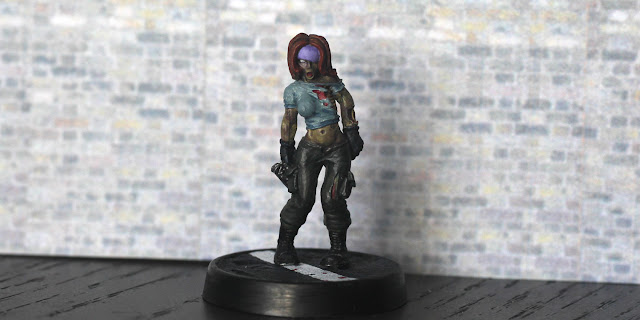 Ashlee was a member of a crack zombie-killing team until one day she wasn't. Thanks to vestigial memories of her training, she's now a very good human-killer and can even get off the occasional potshot with her pistol. Ashlee's appearance sends the most hardened zombie hunter running for cover.

Ashlee is the zombified version of Ashlee Campbell, Hasslefree's female version of a certain movie trilogy's protagonist. She was an easy paint job and I got her done in a couple of hours. Her t-shirt it Vallejo Dark Blue Pale, with Olive Grey for her trousers. The only small issue I had was working out what the band across her head was; at first I thought it was her skull, but it's her hairband. A touch of Blue Violet on it and she was done.
Labels: female, hasslefree, horror, reaper, vallejo, zombie