Ig, as I'm calling him from now on, is one of the minis I've had the longest: he's spent four years in the Magical Box of Unloved Lead. Four years! He'd have got less for committing an insurrection. Anyway, Ig was a freebie that came with one of my first Reaper orders, and back in the dim dark days of 2018 I wasn't really interested in painting him.

I discovered Ig when digging around for bits to use on the base of my newest billboard and decided it was about time I did something with him. After spraying him with white primer, I set to work. 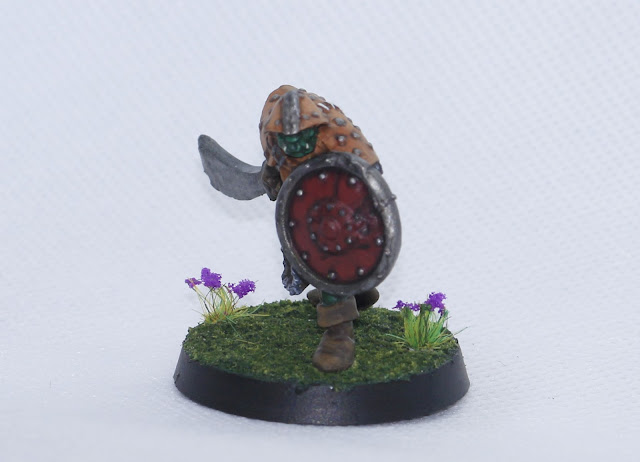 I started with his helmet and cloak, using Orange Brown, Light Brown and Seraphim Sepia. Once painted the studs were dabbed with a little Ash Grey and then gone over with spots of Plate Metal and a bit of Nuln Oil. I did the rest of the leather clothing with Burnt Umber, Mahogany Brown and Flat Earth, using Burnt Umber Tone to shade them. The stitches are Off-White and more sepia wash. 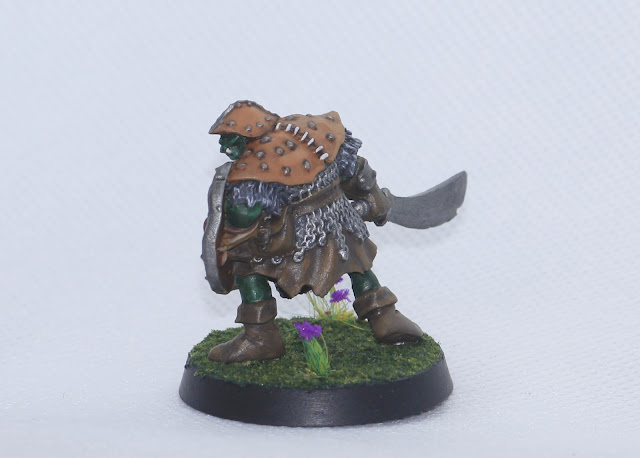 Next up was Ig's fur and chainmail. Both were based with Mechanicus Standard Grey and the chainmail was drybrushed with Plate Metal, and then given a wash with Nuln Oil to tone down the shininess. The fur was highlighted with Ash and Ghost Greys, and instead of doing my usual shading with a brown wash I left the grey tones.
Ig is the first orc I've painted so I was a bit stuck on whether to go light/bright green or darker on his skin. I eventually decided to base the skin with Heavy Black Green and then highlight it with Park Flat Green, and then tone the highlights down with Biel-Tan. It actually went better than I thought it would, and once his face had dried I used a small amount of Ivory on his tusks. Ig's eyes are tiny and as they're hidden by his helmet I decided to leave them rather than bugger about.
Also, why has he got a satchel? What's he keeping in there? Photos of the wife and kids? A sandwich and a Mars bar? Plundered loot from his last battle? Reaper seems to love putting straps and bags all over their figures. 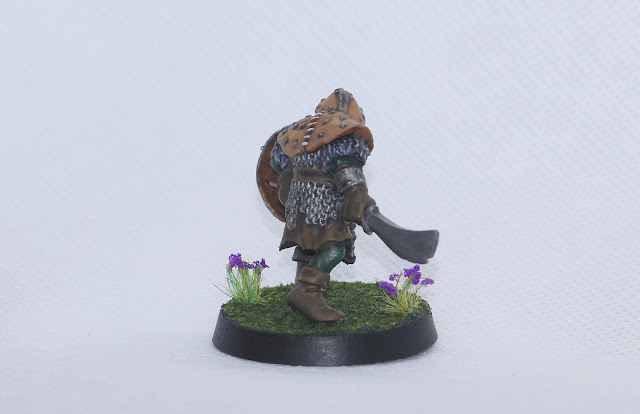 The final bits to be painted were his sword and shield. The sword was easy enough, just painted the same way as the chainmail. I used the same technique on the shield rim and painted the centre Khorne Red (it's rapidly become one of my fave paints and I'm going to have to ban myself from using it soon). After giving it a wash with Nuln Oil, I layered on some thin Mephiston Red. The back of the shield is Heavy Skin Tone coated with Wood Grain.
I covered a 32mm base with PVA and dumped on some flock. Once it was stuck on I daubed on thinned matte varnish to seal it, and then glued on Ig. I added a couple of flower tufts just because I like them. 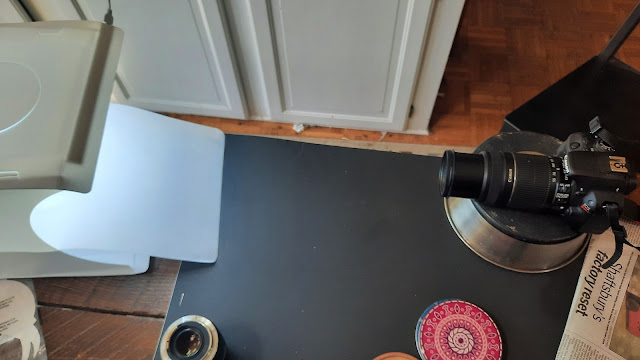 I took the pics with the new lightbox on the kitchen table, or more precisely on the edge of the kitchen table thanks to the USB cables not being quite long enough. Instead of the usual 50mm macro lens I used my 55-250mm, propped it up on Watson's upturned food bowl and put it further away from the box. I used the white backdrop and had to use the camera's built-in flash to light Ig properly from the front. 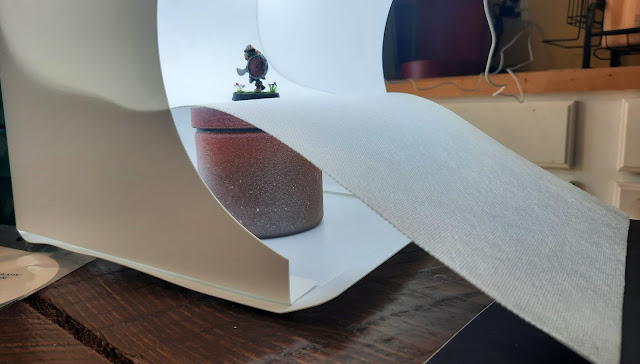 Ig's propped up on a jar I use when spray painting to get him closer to the lights. The white backdrop works in terms of bouncing light onto him, but I'm not sure I like the photos because it looks like he's floating in a white void a la Kenny Everett. I'm going to try printing an abstract background onto matte photo paper and seeing if that works.
As usual, stay tuned for more!
Labels: fantasy, orc, reaper