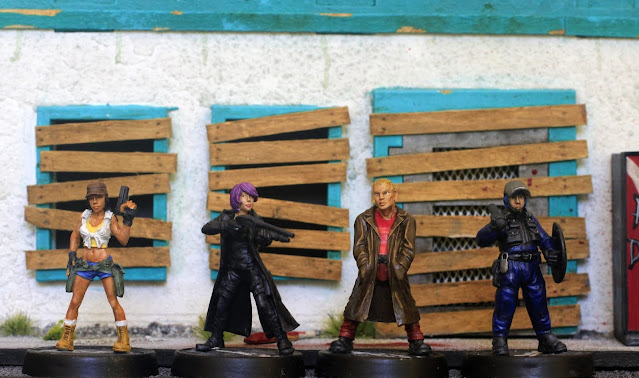 Having painted stuff for eight(!) challenges* this year, it's nice to just paint something for the hell of it. Meet Rihanna, Dakota, William and Neil, just chillin' in front of the abandoned convenience store. All of them are Hasslefree figures. 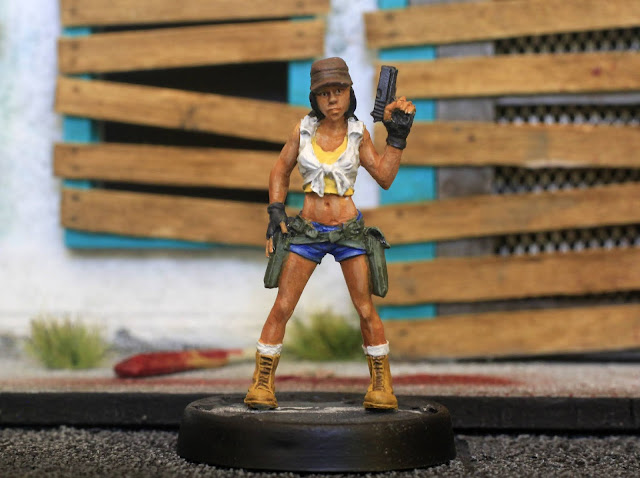 Rihanna was a mechanic until her boss made an inappropriate advance by trying to tear her face off. Escaping through the window, she grabbed a couple of gun belts off a very dead soldier and has been shooting her way through the end of the world ever since.

Rihanna is obviously Hasslefree's version of Rosita Espinosa, everyone's fave hot Latina from The Walking Dead. I remember her debut on the show but as I gave up on it years ago I can't remember her colour scheme, so I did my own. I could have looked it up but I really didn't want another survivor in drab greens and greys. So, Flat Blue and Blue-Grey for her shorts, Gold Brown for her boots, Golden Yellow for her t-shirt and Off-White for her shirt worked really well. I gave a nod to the military with Olive Grey belts and holster. Her skin is Light Brown and in an odd bit of irony, I did her hat in Chocolate and Mahogany Browns while not knowing she wears a brown cap in the show. Her eyes are spot on and only took one attempt! 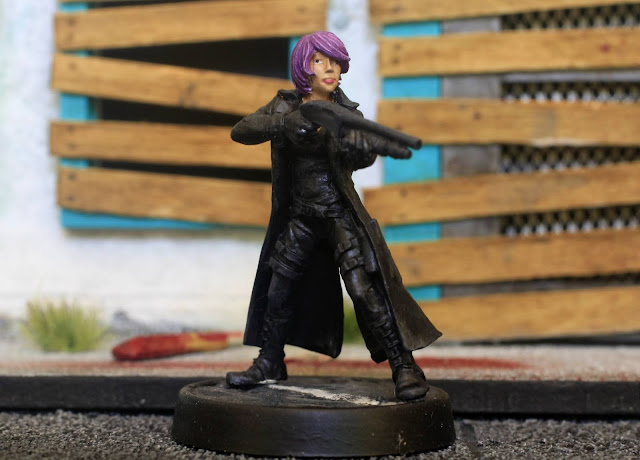 Dakota used to be a biker chick until the dead began treating the living like an all-you-can-eat buffet. She lost her bike but hung onto her shotgun and hairbrush.

If anyone can guess who Dakota is based on, let me know in the comments. She was pretty easy to paint; Black all over, a coat of Black Wash and then some basic highlights with Dark Grey. Her hair was originally going to be Ghost Grey with a Purple fade but you can probably guess what happened as I just ended up doing it Purple and adding some Off-White for the highlights. Dakota's right eye makes her look like she's just spotted a butterfly, but I'm not redoing it. I gave her lower lip a dab of Wizard's Robe to simulate lipstick. Her arms and shotgun are a separate piece, and as with a couple of other Hasslefree multi-part minis I own, I had a sod of a time getting it to fit and even had to resort to greenstuff to fill the gaps as her left hand was about a millimeter from her wrist. 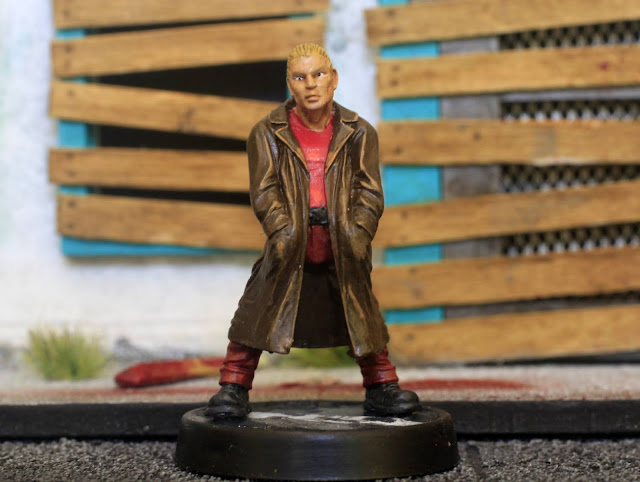 William is a bit of a mystery to the other members of the group. He doesn't say much and keeps to himself, but he's a dead shot and has saved Rihanna from a fate worse than death on more than one occasion.

I'm 100% positive this is Spike from Buffy The Vampire Hunter, a show I've never seen but seem to know about thanks to cultural osmosis. Then again it could be Matt or Luke Goss from boy band Bros. As I'd just painted Neil in dark colours and knew Dakota was going to be done in all black, I decided to go brown on his coat with Chocolate and Mahogany browns and highlights with Flat Earth. Cavalry Red worked for his trousers and I decided to go with Flat Red for his t-shirt just to add some colour. A bit of Gold Brown for his hair and we have another survivor! Hasslefree's site says he has "powers" but for the sake of any game I play with him, he's got two pistols in his overcoat pockets. 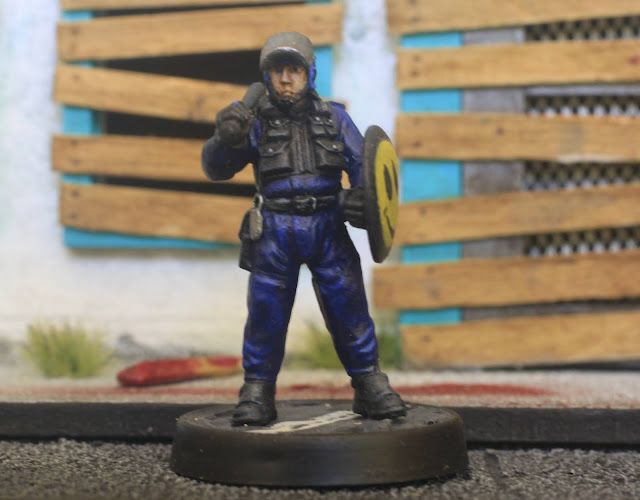 Neil was on the same exchange trip as Sam. After losing his colleague in the chaos, Neil put on his riot gear and went clubbing. He decorated his shield in an apt way.

According to Hasslefree's site, Neil is based on a friend of theirs who is actually a policeman and posed in all his riot gear for this sculpt. I can't speak to how accurate it is, but it is a good mini with bags of detail. He came with a choice of arms: baton and riot shield, or riot gun. I thought having another close-combat survivor was a better choice, and I really wanted to paint a smiley face on the shield. Surprisingly the arms fitted really well with no need for filler. Neil was painted Dark Prussian Blue all over and highlighted with Blue, and his pouches, belts and boots are Black Grey. His helmet is Flat Blue and the visor Silver.

*Paint What You've Got; First Of The Year; Fembruary; Neglected but Not Forgotten; Paint the Crap You Already Own!; Monster May(hem); Forgotten Heroes; Season of Scenery. That's a lot of challenges and I've enjoyed every one of them. In case you're wondering, the egg is still a work in progress; Mod Podge takes hours to dry so I left it overnight. Again.