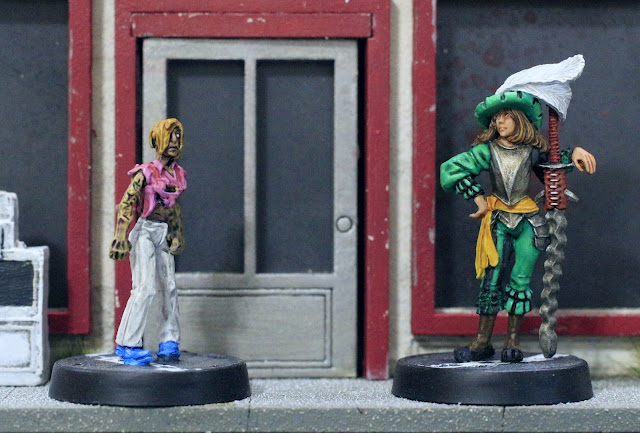 Maika von Ostwald (real name Julie Smith) was attending a Renaissance Faire when people went from munching on turkey legs to munching on human legs. Luckily for her, the whopping Flammenschwert she's leaning on is not only real, she's also very good at using it, as the deadhead shuffling towards her is about to discover.

So it turns out that one of my reader(s) is psychic! Dave commented that Astrid (the half-elf, not the spy) should have been a LARPer who'd brought her guitar for the after-party when the zeds started saying hi. Joe and Dai both agreed with Dave's idea, and should also probably ask him for next week's lottery numbers. I'd already had the idea to make Maika a RenFaire attendant and was about 90% done with her when I saw Dave, Joe and Dai's comments, and I think it's pretty awesome that we all had the same idea albeit about different minis.

Anyway, Juile Maika was an impulse buy from Hasslefree about 18 months ago. I put four zombie survivors in my basket, then decided to have a look around the site to see if any other minis caught my eye. Maika stood out a mile thanks to her awesome paintjob so I bought her on a whim. I didn't realise at the time that she also comes in a dynamic pose, but too late now.

She's dressed as a landsknecht, which were 16th-century German mercenaries who wore ridiculously flamboyant clothes and colours to flaunt their status and reputation as formidable fighters. I googled around for ideas and found this one in green and black, and as it's a colour scheme I haven't painted before and it looks good I decided to go with it. 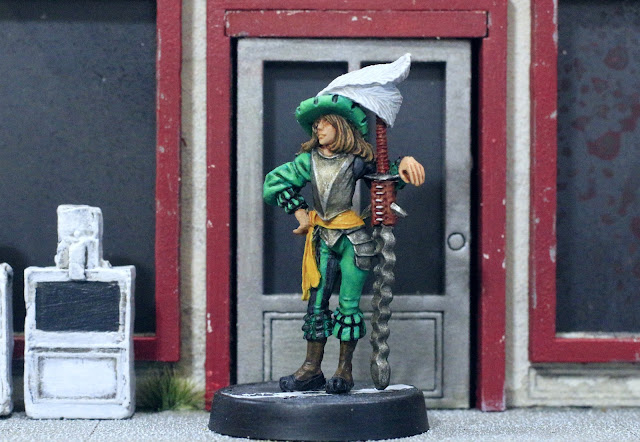 After priming Maika I kicked off by basecoating all the green bits of her clothes and hat with Heavy Black Green. Once dry it got a coat of Park Green Flat, then a wash with Biel-Tan Green. I picked out the highlights with more Park Green Flat and then Light Green.

The black areas are Black (shocking, I know!) highlighted with Dark Grey. The stripes on her right leg are actually etched into the metal to serve as a guide, but I didn't let that stop me from going over the lines, oh no. Much touching up later and her clothing was done.

I did her sword next, basecoating it with Mechanicus Standard Grey and then painting it Plate Metal. The hilt and leather bit are Red Leather over Dark Red, washed with Red Tone, and the laces are Ivory. The metal bits were shaded/discoloured with Nuln Oil and Sepia Wash and got a light highlight of Silver. 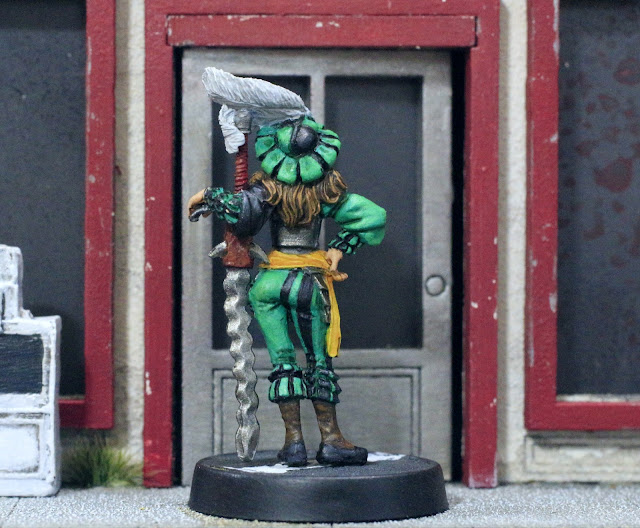 I wanted to add a tertiary colour on her sash and went with yellow, using Averland Sunset highlighted with Lemon Yellow and washed with Casandora Yellow. Her armour was painted the same way as her sword. Maika's hair is courtesy of Mahogany Brown, Umber Wash, and Orange and Light browns, and the huge feathers in her hat are Ghost Grey, Grey Wash and White.

Her leggings(?) are Chocolate Brown and Flat Earth, and her shoes Black and Dark Grey. The final bit was her skin, done with my own flesh mix (of which I really need to make more) and Reikland Fleshshade. Her eyes were the usual bastard to do.

Maika's a fantastic sculpt and is totally different to any of my other figures. Using her as a RenFaire/LARPer to get her into the zombie world was a great idea and I think her Flammenthingy will be a powerful weapon against the fragile undead. The only thing I'm left wondering about is whether I should have highlighted the green more, either by adding white or yellow. Any suggestions?