This is the first actual group of survivors I've painted since August! The last group was put up individually and you can see them here. These guys are all Hasselfree minis which I ordered in March but only showed up a week ago. From left we have PC Sam Ford, Katie, Parker and Aaron. 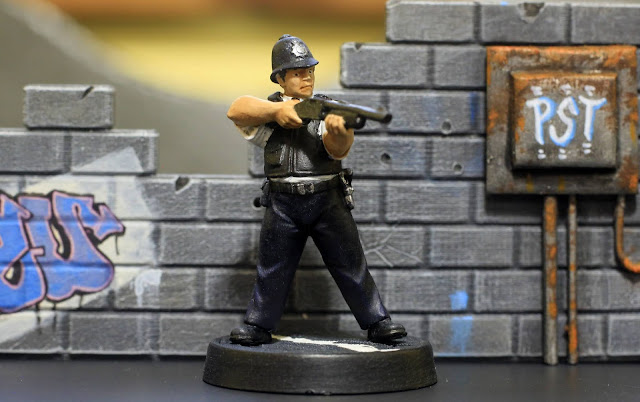 Sam Ford is a British bobby on an exchange visit to the States. Once the zeds started to walk, he kept a stiff upper lip, picked up the nearest shotgun and started shooting. And this time he's doing it for the greater good.

Sam is obviously Danny from the absolutely awesome Hot Fuzz. I love how he's named Sam Ford after Sandford, the town where the movie is set. Being monochrome he was easy to paint — lots of Black and Off-White, and as British police wear very very very dark blue his trousers and helmet are a mix of Black and Dark Prussian Blue. 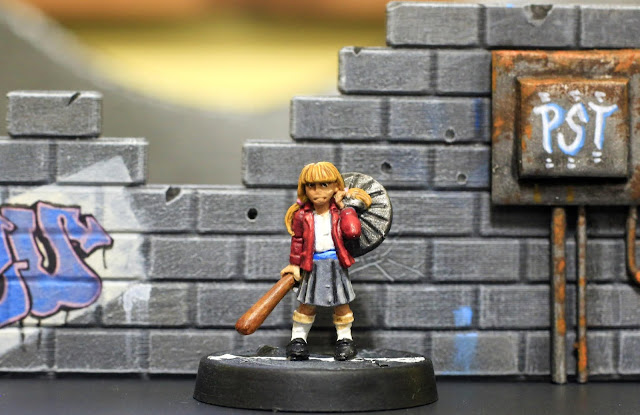 Katie got home from school one day to find her dad chewing on a neighbour's leg and her mum eating the family dog, and promptly legged it. She survived on her wits and with the help of a baseball bat and a bin lid, but feels a lot safer now she's with others.

Hasslefree's minis of little kids are great but they're a pain in the arse to paint thanks to the tiny details. As with Rose, I painted Katie in grey like a school uniform, but then I decided to add some colour. So I redid her coat in Flat Red and Red and her belt in Deep Sky Blue. Her face caused a bit of an issue thanks to her nose being almost nonexistent but at least her eyes actually didn't cause me too much trouble. 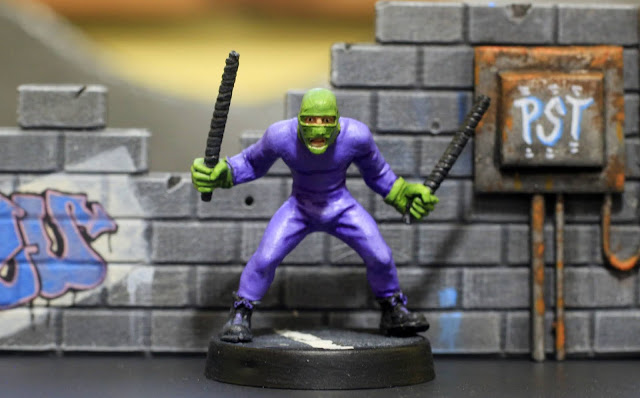 Aaron is a local nutter who went on a one-man crusade against crime in his town before the zombapocalypse began. Since then he's teamed up with Supercop, Bash Girl and Troublemaker (as he's named them) to take out as many what to him are mindless criminals and what to everyone else are flesh-eating undead horrors.

Say hi to Kick-Ass from the movie of the same name. I know he wears green and yellow in the film but as I've just painted a load of green Plague Marines and recently developed an aversion to yellow I decided to crack out my oft-neglected Blue Violet and Scorpy Green. He was easy enough to paint; I just used Violet for the shading on his suit and highlighted him by adding white to the Blue Violet. I even got his eyes right the first time YAY! 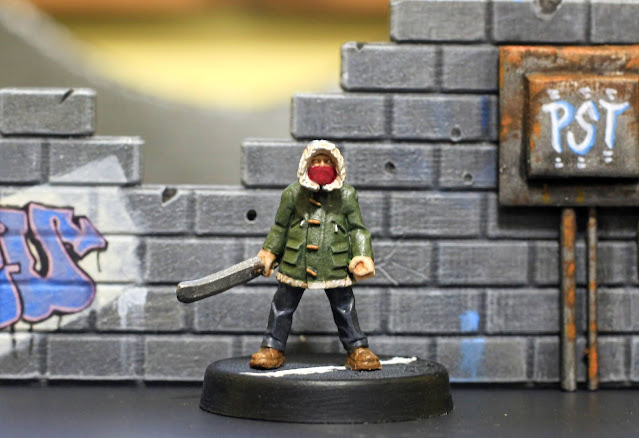 Parker is a ne'er-do-well with a bit of a record and an aversion to showing his face. Since the dead started treating the living like a mobile buffet he's proved very effective at removing heads with his machete and his street smarts have saved his life more than once.

So named thanks to his classic 70s/80s snorkel coat, Parker was a doddle to paint. Snorkels came in two colours, dark blue and green, and I gave him the green version because that's the colour my snorkel was. So, Olive Green for his parka, Dark Grey for his trousers and a touch of Red for his non-Covid compliant mask.

As per usual they're based on Liquitex modelling paste painted Black Grey, washed with Black and then highlighted with Neutral and Ash greys, with a white stripe as the final touch. I was bored the other day so made about 20 of these bases.