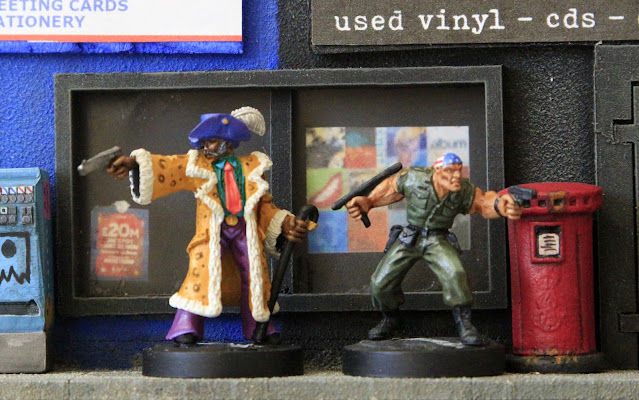 Sly and Terrell fight back-to-back to defend the record store from a horde of zombies. Once they're out of ammo they'll start beating skulls to pieces.

I usually post my survivors in groups of four, but the other two are still meandering through the postal system. As I haven't painted any since October, I decided to just crack on with this pair before starting on the new buildings. Both these chaps are by Reaper. 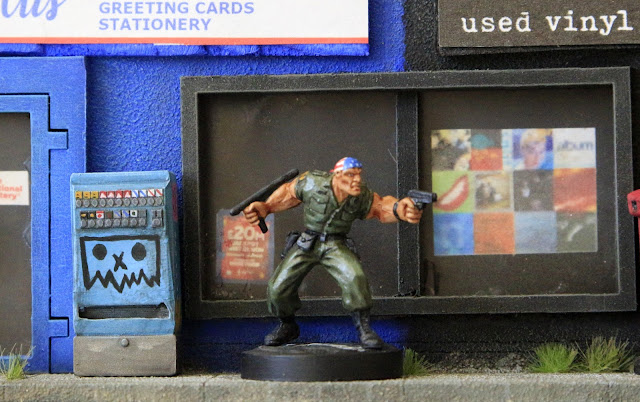 Terrell belonged to the same military unit as Hans, but they were split up in the panic caused by the dead rising. With his pistol and night stick he's a deadly zombie hunter, and he's never missed an arm day at the gym. 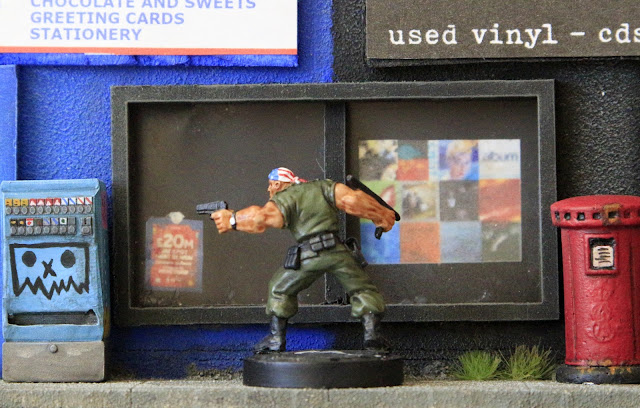 Terrell was an easy paintjob: lots of Olive Grey for his clothes and Black for his pistol, night stick and pouches, with my own skin tone mix and Reikland Fleshshade for his bare bits. I wanted a spot of colour somewhere and decided to paint his do-rag like the Stars and Stripes. I think it worked.

I can't get over that his forearms are thicker than his head. 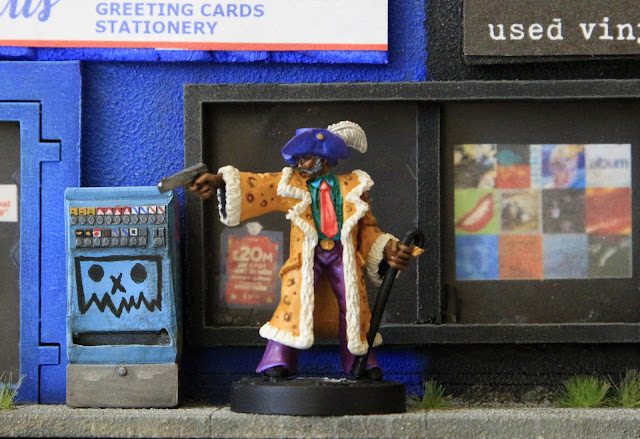 Sly Withers was the host of the 70s-themed fancy dress party that rapidly descended in to chaos when it was gatecrashed by zeds. He dived out of the kitchen window, grabbed a pistol and shot his way out of the garden. Since then he's been surviving thanks to his skills with his gun and cane. 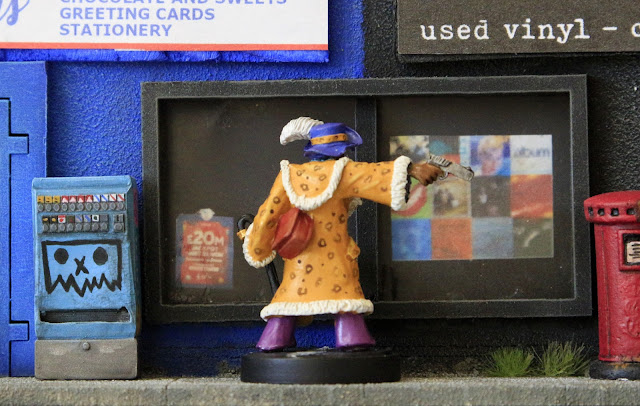 Sly is a remodel of Reaper's Horace "Action" Jackson turned up to 11. He arrived in the mail with a bent right hand and gun, and I managed to get it back to an angle where it looked OK without breaking off.

Anyway, painting. I went all-out and did a horrifying clash of colours to keep the spirit of the 70s alive, with Purple trousers, a Blue-Green shirt, a Wild Rider Red tie and an Ultramarine Blue hat. I don't know why he has a bag (Reaper seems to love adding bags and straps to its minis) but it's Cavalry Brown and Red Leather.

But enough about those bits, just look at that coat.

It was originally going to be Violet, but then I found a Duncan Rhodes video on how to paint the leopardskin pattern on the re-released Noise Marine. I thought that after all the graffiti I've freehanded over the past few days it would be straightforward so gave it a go, using Averland Sunset for the yellow. The spots are small dabs of Burnt Umber wash with little dots of Averland Sunset in the middle. It worked so well that I used the same scheme on his hatband.

The fur trim is Silver Grey with White highlights, and there is more contrast in real life.

Hopefully the other two figures will arrive soon to complete the latest team but in the meantime I can get on with the new buildings.