Here's the latest survivors who are shooting or bashing their way through a brave new world of shambling undead horrors. They're all by Hasslefree.

It's been a bit zombie-heavy here on PMPainting recently, but fear not, I have some monsters on the painting table as well as working on a scenery piece and building a Kill Team or two :-) Also, a tenth Zombie Hunters post means I now have 40 of these chaps and I really, really need to play some sort of game with them. 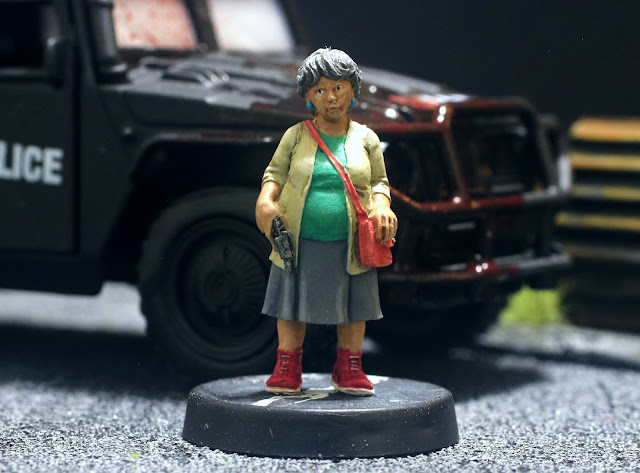 Carol has such a classic British housewife look that I bet her clothes come from Marks and Spencer! I like zombie survivor figures that are basic everyday people rather than musclebound hunks with assault rifles and military clothing. She was the last of the group to be painted, with Stone Grey for her cardy, Park Flat Green for her top, Wild Rider Red for her handbag and Neutral Grey for her skirt. Her boots are Flat Red. I'm not sure what's going on with her chin, I hope it's a shadow and I didn't get grey on her face and not notice until now. 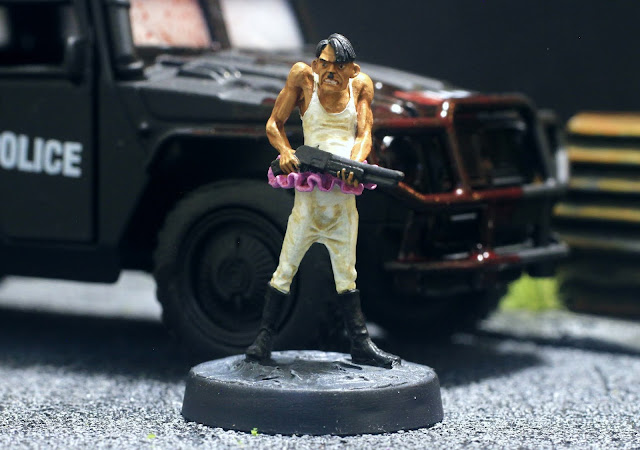 Roberto Ramirez is... special. Let's just leave it at that. When the zeds began their rampage he didn't even get changed out of his normal clothes; he just picked up his shotgun, checked his parting in the mirror, went out his front door and hasn't looked back.

Your eyes do not deceive you: this is a Latino guy with a Hitler haircut and Hitler 'stach, one-piece underwear, jackboots and a pink tutu. Roberto is usually out of stock, so when I saw he was available I grabbed him. As you can see, he was a doddle to paint: Ivory, Pink and Black sorted out his clothing, hair and gun, with Light Brown and Sepia Wash for his skin. The only problem with Roberto was that he's on a flat metal base rather than a slot, so I had to build the "pavement" up around and over it with modelling paste. It's why he doesn't have a stripe on his base. 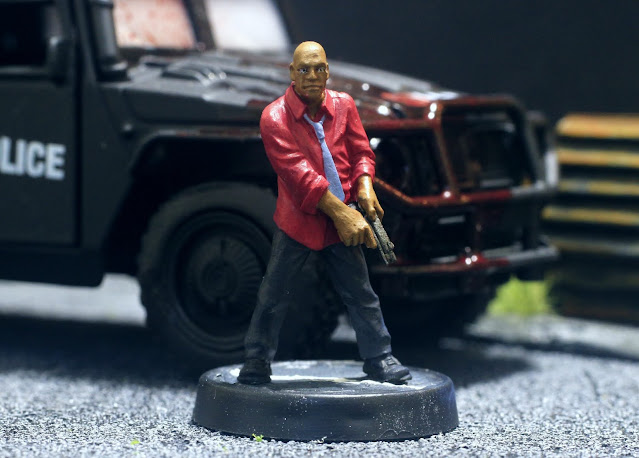 Earl may be wearing a red shirt, but he's not easy to kill. A former sandwich store manager, Earl's traded 12-inch subs for 9mm rounds and is finding that surviving in a world populated with undead monsters is actually less stressful than serving customers during the lunch rush.

Earl was very straightforward to paint: Flat Red and Wild Rider Red for the shirt, Dark Grey trousers and Black shoes. His skin is Flat Earth with some added Bonewhite for the highlights. I'm glad I've seemingly managed to get the hang of painting black skin without it looking way too dark. 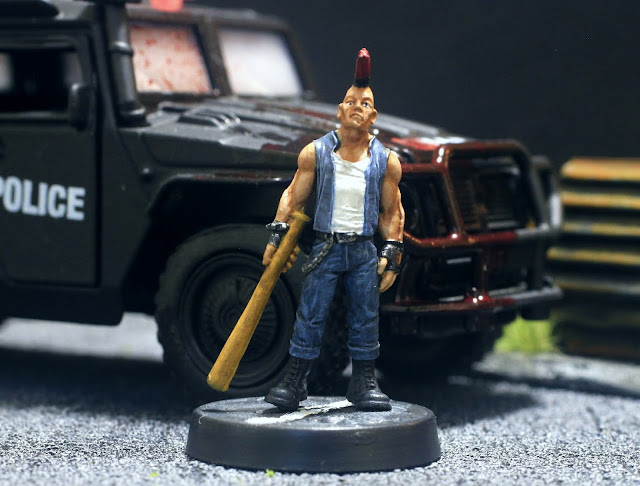 Joe was at a punk gig with his girlfriend Joanne when the lights went out and he lost her in the chaos. Since then he's found a group and has proved himself adept at slamming rotting skulls with his baseball bat. He adores Carol because she reminds him of his mum, so woe betide anyone — living or dead — who threatens her.

I painted Joe much the same as Joanne: Blue-Grey shaded with a mix of Black and Blue washes worked for the denim, and his Doc Martens and gloves are Black. I totally forgot to paint a design on his T-shirt, which is annoying, but he looks scary as hell and that's what matters.

The background is a police SWAT vehicle I picked up from CVS a month ago. I was going to rust it up, but then decided to just plaster the bull bars and grill with Blood for the Blood God and spray some over the bonnet and windscreen as if it had ploughed through a crowd of freshly-bitten zedheads.