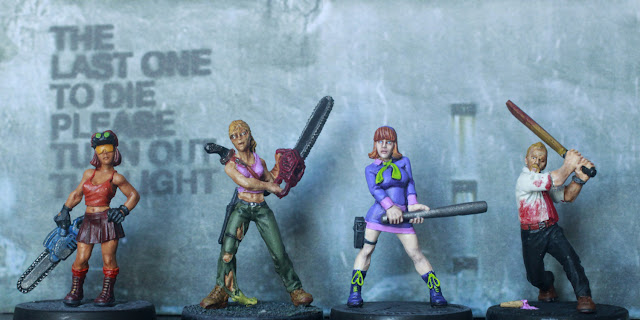 Here's the four post-apocalyptic zombie killers I've assembled so far. From left we have Louise, Berkeley, Felicity and Ray. Three of them are vaguely familiar, for some reason.

These aren't a team in the sense I play tabletop games with them, although the more zombies and survivors I collect, the more I think I should do something with them. I thought I had more post-apoc/zombie-rising type figures but this is it, which is sort of disappointing. Still, there are loads more out there for me to buy and paint. 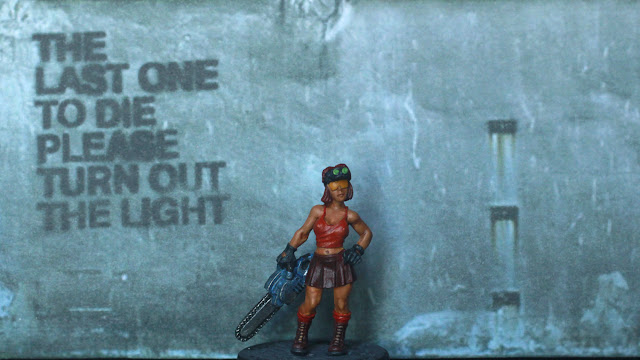 Louise's skin is tanned a healthy brown thanks not only to years of living in a post-apocalyptic wilderness, but also to a painter who used the wrong skin tone. Her chainsaw is kept meticulously clean so it won't jam while tearing into undead flesh and her infrared goggles mean she's perkily dangerous even at night. Louise also proves what some of us have known all along: Velma is the hot one.

Hasslefree's Louise was easy to paint with Vallejo Amaranth Red (a bright orange), Burnt Red and Black Red. I can't remember which one of my crappy blues I used for the chainsaw but I plastered it in black ink and drybrushed it with Army Painter Plate Metal to make it look old and dirty. Her goggle lenses are Army Painter Jungle Green and her shades Vallejo Yellow Glaze.

As noted, the skin is waaaay too dark so she might end up being stripped (of paint, you dirty sods) and redone. 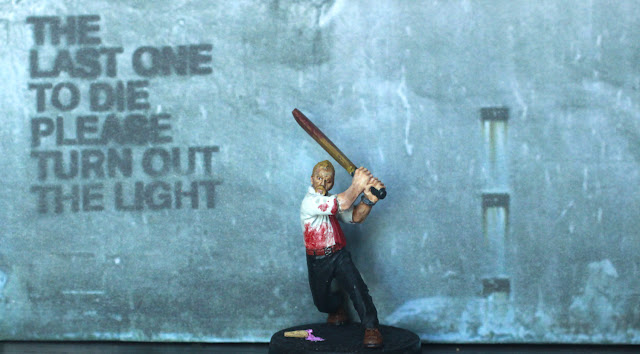 Ray had a simple plan: rescue his girlfriend, rescue his mum, get to the pub and have a nice cold pint while waiting for all this to blow over. Unfortunately, fighting zombies through the streets of Norf Lahndahn armed with nothing more than a cricket bat and an encyclopedic knowledge of rave music turned out to be harder than he thought. And to cap it all, he's dropped his Cornetto.

Kev White's awesome Hasslefree sculpt was straightforward to paint: Vallejo Off White for his shirt, Black for his trousers, Flat Red for his tie and Mahogany Brown for his shoes. His cricket bat was done in WW2 Japanese Uniform (seriously) and the blood is the ever-reliable Citadel Blood for the Blood God. Some Light Flesh for his skin and Golden Brown for his hair and he was done.

The Cornetto is made from the pointed end of a toothpick stained with Army Painter Strong Tone, and Liquitex Modelling Paste mixed with Vallejo Carmine Red. The only issue was assembling him, as his arms are a separate piece. It was an absolute sod to get them aligned properly. 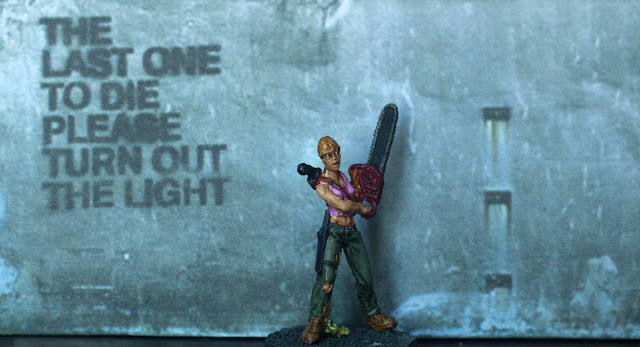 Berkely is armed with a chainsaw, a shotgun and a machete, so she's prepared for any confrontation. Please don't dwell too much on her face, which is the result of a horrifying accident involving someone who isn't too good at painting eyes. But don't let her googly look fool you: Berkeley is so tough she still has the hand of her last kill hanging onto her jeans and she doesn't give a shit.

This was my second attempt at painting Reaper's Berkeley. I originally bought the Bones plastic version of her in 2018 only to discover that her chainsaw blade was bent. No matter what I tried, including the "warm, straighten and freeze" method, it remained bent so I chucked her in my bits box.

I bought the metal figure a week later, got as far as priming and painting her trousers, and for some reason gave up. She stayed in the Magical Box of Unloved Lead until November last year when I decided to give her another go, and she turned out pretty well. Vallejo Olive Green for her trousers and Pink for her vest, with Army Painter Desert Sand for her boots. Her chainsaw is Vallejo Red with lots of Vallejo Black Wash to give it a dirty look.

The dead hand (it's by her right foot) is Dead Flesh and Army Painter Green and Purple tones. 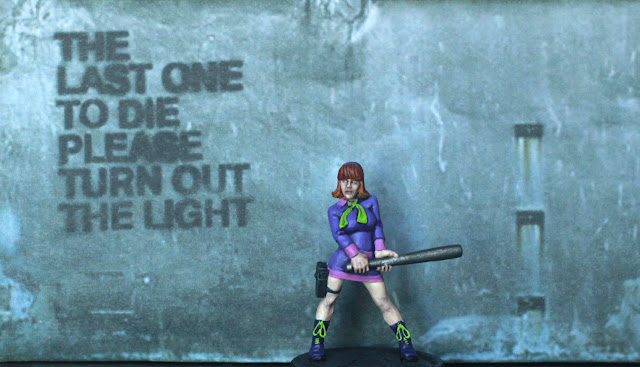 Felicity's ice-blue eyes have the thousand-yard stare of someone who's seen death in all its many disgusting forms. Her aluminium baseball bat has staved in the skulls of many, many zombies (and possibly one 'kin annoying puppy) but she won't talk about that. She just stares. Felicity knows that pink, purple and bright green don't go together, but good luck arguing with her.

I knew that Scooby Doo's Daphne wore purple but I'd forgotten about the green and pink trim. I originally painted Hasslefree's version Vallejo Royal Purple and washed it with Army Painter Purple Tone, but it was far too dark. So I went over it with Vallejo Blue Violet and cunningly left the dark paint in the shadows to save having to shade it later. Yay me.

Her laces and scarf are Army Painter Jungle Green and the trim on her dress is, amazingly, Vallejo Pink. She was finished off with Vallejo Black for her holster, Army Painter Plate Metal for her bat and Vallejo Light Flesh for her skin. He hair is Vallejo Cavalry Brown highlighted with Light Orange.

Their bases are just Liquitex Modelling Paste painted black with a bit of grey highlighting.

I have more post-apoc figures on order and on the painting table, so if both of you stay tuned you'll see more soon. Soonish. Maybe.
Labels: army painter, basing, female, hasslefree, miniatures, reaper, survivors, vallejo, zombie