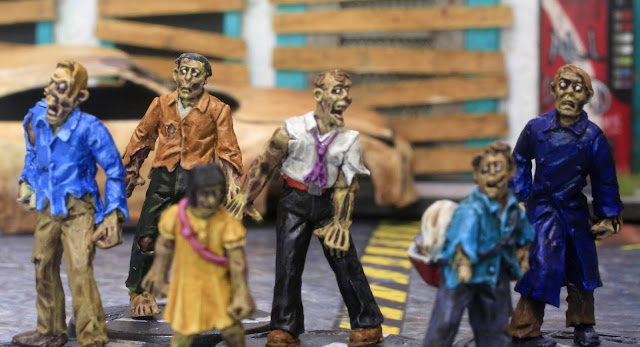 Another group of crumbling corpses make their way past what's apparently the most popular convenience store in existence.

There's still no sign of the Hasslefree survivors, but yesterday I found these Brigade Games minis in the mailbox and got them on the painting table 10 minutes later. Like last time, I painted all the skin first then the clothing, which I've found to be the easiest way to get them done. I think they took around 2½ hours in total, but more like four in real time as I did them in between dishes/laundry/stopping the bloody dogs from barking at every car that goes past the house.

All these rotting roamers are from the Drug War Z line of minis. 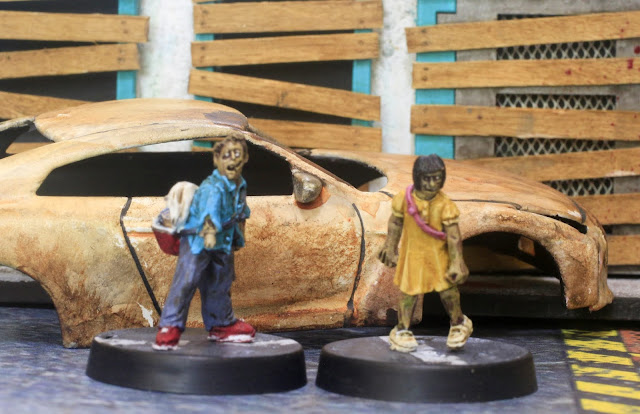 I'll start with the kids, as despite having a couple of survivor children these are the first pint-sized zombies I've painted. Oh wait, no they're not. Anyway, they were pretty easy to do, and I even stretched myself by doing the girl's dress in yellow. As the boy has lost his right arm I've named him Andy, and the girl Louise.

Andy's painted with Blue Green, Sombre Grey and Red, and Louise is done with Yellow Ochre, Lemon Yellow, Pink and Off-White. They look really good and I'm well happy with them. 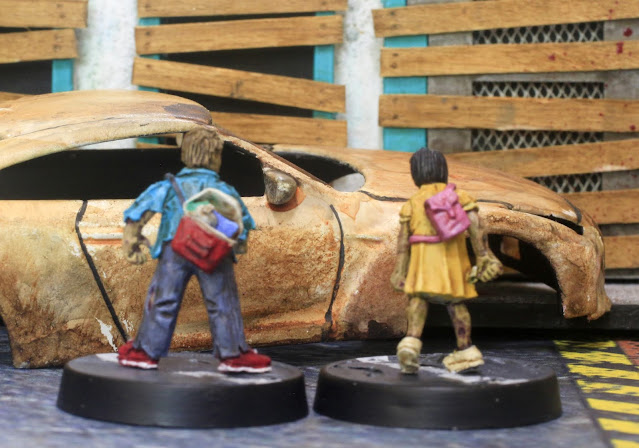 I'm guessing both kids were bitten on the way to school as they still have their backpacks on. Andy's is well detailed with books and a travelling mug in it. Pink was the blindingly obvious colour for Louise's. I did something a bit different when painting these two by using Army Painter Strong Tone to not only shade them but also make their clothes look dirty. 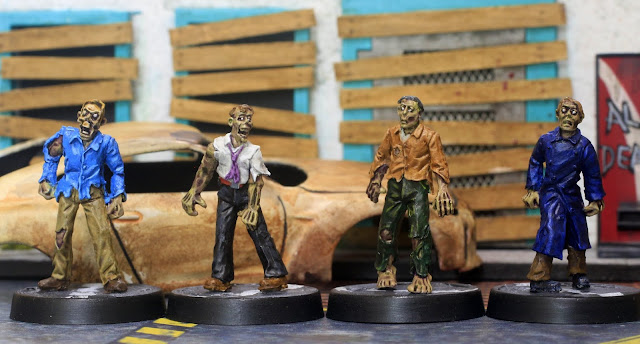 The four adult zombies are just as good as the last set from Brigade Games. I'm not sure why the one on the right is wearing a raincoat, unless he's a flasher? They're all solid sculpts with plenty of rotting detail, including the one on the left having a flayed face with his skull showing through.

In the interests of full disclosure, the paints I used for their clothes were, from left, Andrea Blue and Khaki; Black, White, Purple and Cavalry Brown; Orange Brown and Mutation Green; and Dark Prussian Blue and Mahogany Brown.

In order to vary the background a bit I put my burnt-out Nissan GT-R in front of the store. The models are all on my new gaming mat, a post on which is coming soon. Ish. Honest.