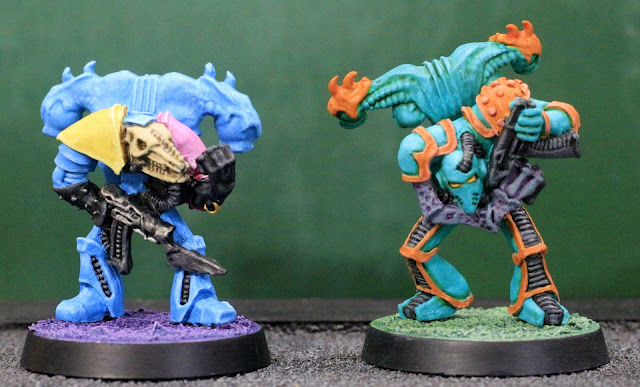 Two more twisted creatures crawl out of the Warp to spread mayhem and terror across the galaxy. But enough about the dogs, let's talk about the minis.

After painting my first two Renegades I dug out the other three I own, because of course they weren't all in the same storage box. I ended up doing these two, and the other is about 50% finished.

Instead of painting them in recognizable schemes I decided to do a more Oldhammer 'Eavy Metal thing by picking a couple of random colours and slapping them on. Once I'd finished them it was a case of "so much for not doing recognizable schemes" as they both look very Slaanesh. Nothing wrong with that in my book. 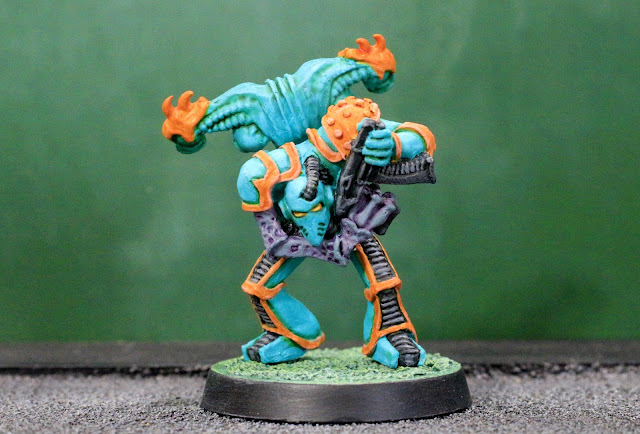 Of all the many renegade models, this is one of my faves simply for wearing Beakie armour as well as his wonderfully warped pose. I decided on green for his main colour, using Emerald Green for all the plates, shaded with Biel-Tan and highlighted with white added to the emerald. His eyes are Averland Sunset and Green-Yellow.

His right arm, which has mutated into one from a Horror, is Blue-Grey washed with Druchii Violet. The ribbed bits in his leg armour are Black Grey and Neutral Grey. 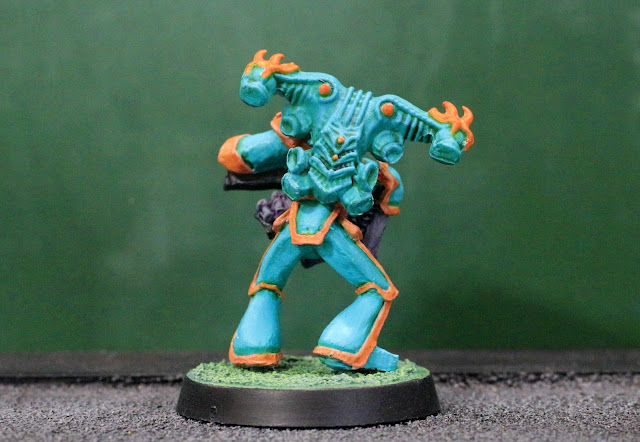 I thought orange would work with the green and look cool, so the trim and his classic studded shoulder pad were painted Heavy Orange. Instead of using an orange paint over it, I brushed on a coat of Casandora Yellow wash and presto! A really decent orange resulted, and it was way easier than using Bright Orange, even if thinned.

All his tubes and his bolter are Abbadon Black highlighted with Mechanicus Standard Grey, and once again I took a pretty lazy attitude to his backpack, just doing a basic job. 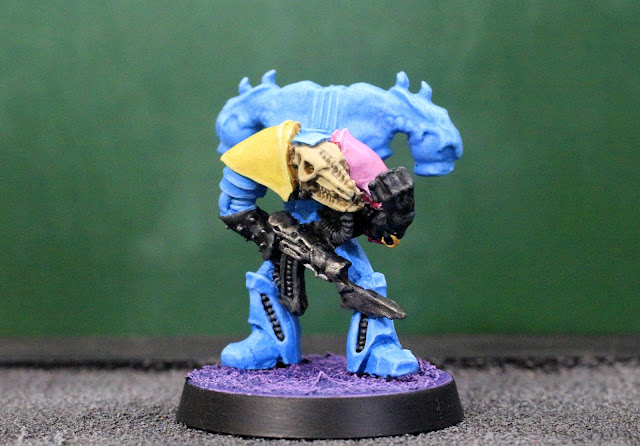 This one is very close to his 'Eavy Metal appearance, where he's painted as an Emperor's Children traitor back in the days when they looked more like Warhammer Fantasy Chaos warriors than their modern pink-and-black versions.

As I was going to paint him in lighter shades I kicked off by doing all the black bits first, using Black Grey highlighted with Neutral Grey. His bolter got a coat of Plate Metal and a wash with Nuln Oil.

With the dark bits ready, I did most of his armour Electric Blue, highlighted with Deep Sky and Sky blues. Despite being a light colour, Electric Blue covers really well and it didn't take long to finish that part. It goes without saying that the black needed to be touched up, but I decided to wait till the end for those fun and games.

His right shoulder pad is Moon Dust over Averland Sunset, and his left pad and arm are Pink over Warlord Purple. 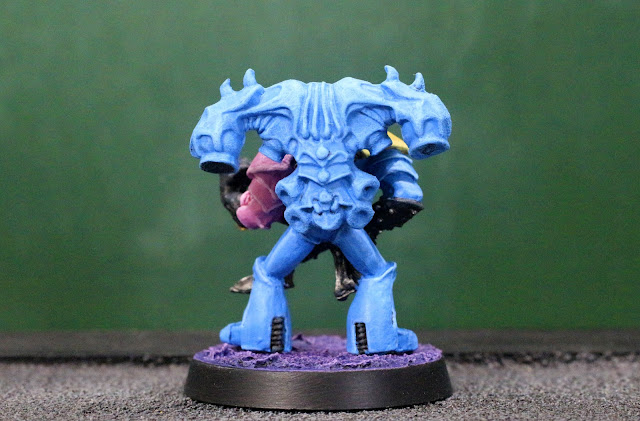 When it came to his skull helmet (head?) I went with a traditional bone look, using Aged Bone and Bonewhite. His backpack is a testimonial to me being a lazy git as it's just painted the same way as the armour.

Both bases are coated with Vallejo Black Lava paste, and I buggered up by accidentally gluing them to the wrong ones. Oh well. One is Violet highlighted with Purple, the other Black Green highlighted with Scorpy Green.

One more Renegade to go, so don't forget to tune in!