Here we go again, with Baker, Suzi, Amoy and Finn. All are Hasslefree minis. 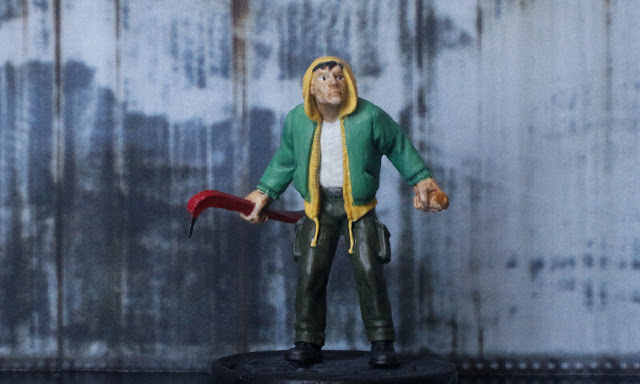 Baker is a former petty criminal whose possession of a crowbar has seen him picked up by the police on more than one occasion. Nowadays Baker uses his trusty crowbar to break undead skulls instead of doors, and he's loving it.

It's only now that I realise his green coat and yellow hoodie make him look like a Norwich City supporter (I guess someone has to be). I think I did the yellow just to have an excuse to finally open my pot of Vallejo Golden Yellow, and because yellow isn't a colour I've used for any of my other post-apoc survivors. His jacket is Park Geen Flat, and I gave him Olive Grey trousers. His crowbar is painted in homage to the most famous crowbar in history and the barely-visible brass knuckles on his left hand are Brass. 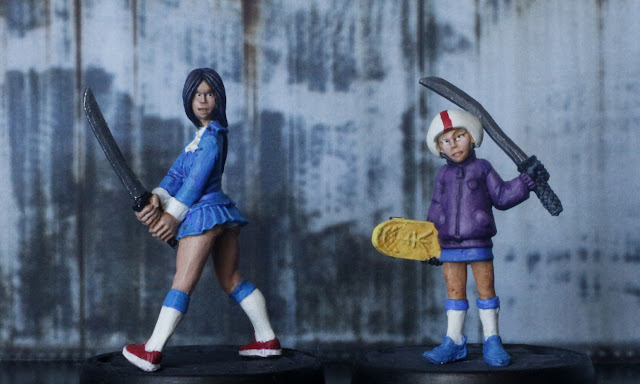 Sisters Suzi and Amoy escaped their school when it was overrun by zombies. They made it home, took their brother's swords and have so far stayed alive through a combination of hacking off heads and running away. Amoy is also an expert as smashing zombie's skulls with her skateboard.

This is the third time Suzi's appeared on my site, although in the other posts she's a zombie. I already had Amoy so deciding to make them sisters seemed the obvious way to go, and it made painting them slightly easier as I could just do them in the same blue for their school uniforms. I used Vallejo Ultramarine Blue highlighted with Magic Blue, with Flat Red for her shoes. Her hair got a highlight of Violet.

Amoy turned up in the mail with a bent sword, which was annoying. It's so thin I was worried I'd break it so I straightened it out as best I could and left it. Some Violet and Purple for her coat and Moondust for her skateboard and she was done pretty quickly. Her right eye gave me some issues and after literally six attempts at getting the pupil to look better I gave up. The stripe on her helmet is a classic example of why I don't paint stripes on the helmets of my old-school Marines. 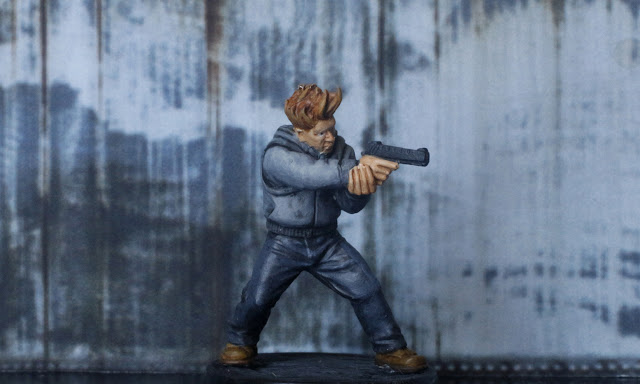 Finn is a former trainee FBI agent who's somehow ended up in the middle of zombie apocalypse with a good supply of hair gel. His marksmanship has saved the group on many occasions but he's getting a bit tired of looking after a couple of schoolkids.

Finn has to be the most monotone mini I've painted. I went with Blue-Grey for his trousers, washed with Blue Tone, and Sombre and Neutral greys for his top. His hair is Cavalry Brown washed with Umber Wash and highlighted with Orange Brown. He was pretty easy to paint, and his dynamic pose makes him one of the best Hasslefree sculpts.