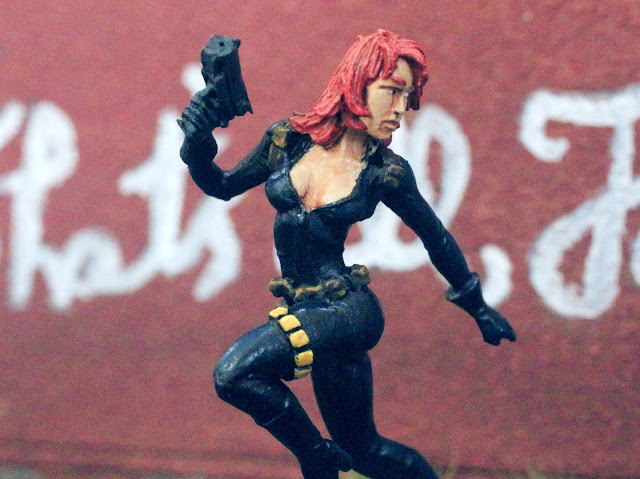 Movie star Cerise Jørgensen was dressed as her character Natalia Smirnoff for a photoshoot to publicize the new superhero movie Onyx Dowager when a passerby took a bite out of her hairdresser. Since then she's survived with the help of her acrobatic skills and a gun she found next to a dead cop.

Natalia is pretty obviously Reaper's version of Marvel's Black Widow, and I've scrolled past her several times while buying stuff on Amazon. I didn't think a superhero would fit into a zombie apocalypse, but I realised I could get her into my collection by having her be an actress dressed as a superhero. And with that, Cerise Jørgensen and Onyx Dowager were born. 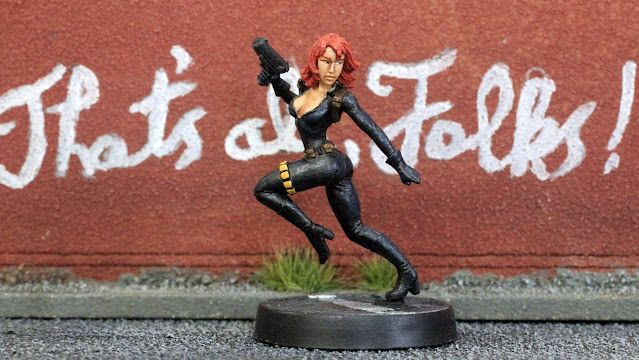 She was a straightforward paintjob; Black all over, with Dark Sea Blue to highlight it and a coat of Blue Tone to blend in the highlights and add a bit of a sheen. To introduce some colour I did her belts and pouches Chocolate and Orange browns. The thing around her thigh (I have no idea what it is) is Averland Sunset, highlighted with Lemon Yellow. 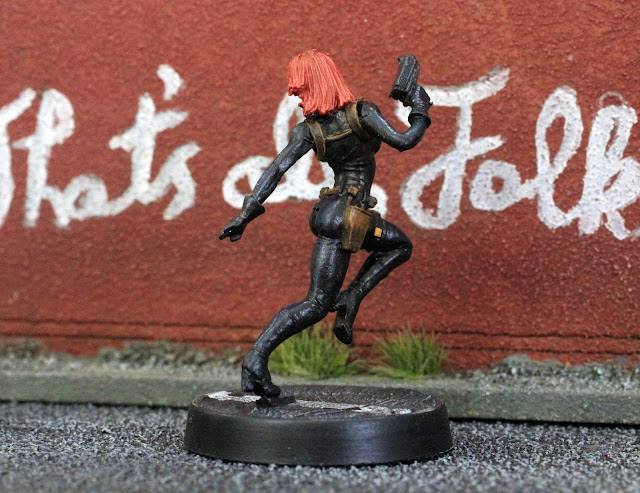 Nat is my second redhead in a row after Pandora, and I used the same paints: Wild Rider Red highlights over a Cavalry Red base. As usual her skin is my own mix, shaded with Reikland Fleshshade. For once I got the eyes right the first time.

The only thing I don't like is the fact she's sculpted running away from something; she'd have looked better looking forward, pointing her gun ahead of her. Still, she's a cool mini and is an interesting addition to my ranks of zombie survivors.

Progress is going OK on the new buildings, although I lost a day when our power went out Friday and we were left in the dark with no water and no heat. Yay. A post on them will be coming soon.