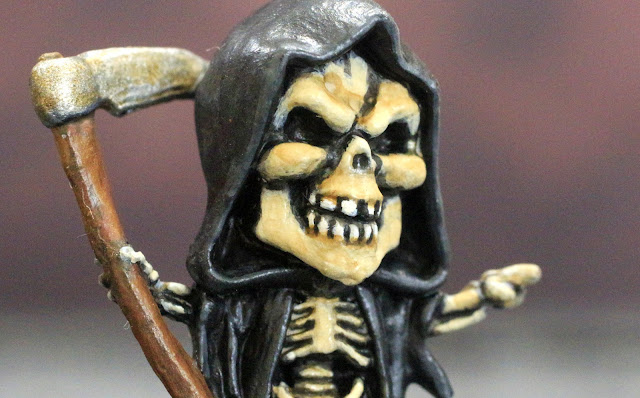 Death is everywhere, but in this case he was on the floor beneath my desk and behind my footrest. I only found him thanks to dropping a brush last night, and I banged him out this morning for something to do that wasn't the dishes or laundry.

Reaper does a whole range of these chibi-style minis, and a few years back I bought a couple of werewolf ones to paint as the dogs. I don't know when I bought Morty, as he's called, but he was a doddle to paint. 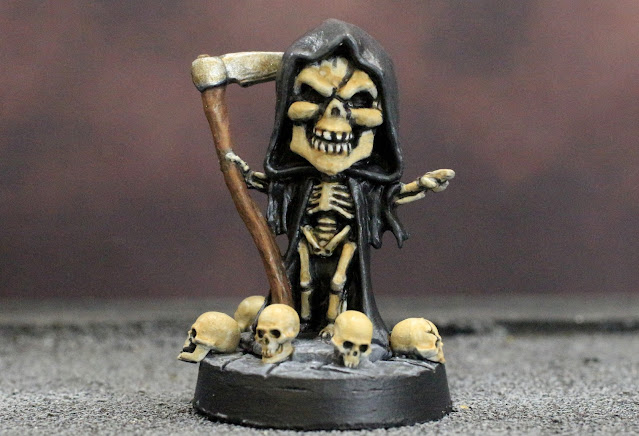 The first thing I did was glue him to a flagstone base. I wanted something to hide the join, so I got six Citadel skulls, primed everything Abbadon Black, and gave his cloak a second, thinner coat.

I did some basic layering on Morty's cloak with Mechanicus Standard Grey, and also used it to paint the base. His scythe was the first bit to be painted, using Chocolate and Mahogany browns, some Flat Earth and a wash with Seraphim Sepia. The blade is Plate Metal with some Serpahim Sepia to give it a bit of an aged look.

Next up were dem bones. Back in late 2020, when I bought my Undead Chariot, I also picked up a couple of Reaper shades with which to paint it: Bone Shadow and Aged Bone. I kicked off with Bone Shadow, layering it on thinly over the black, and once I'd got it looking OK I started adding the Aged Bone in layers. 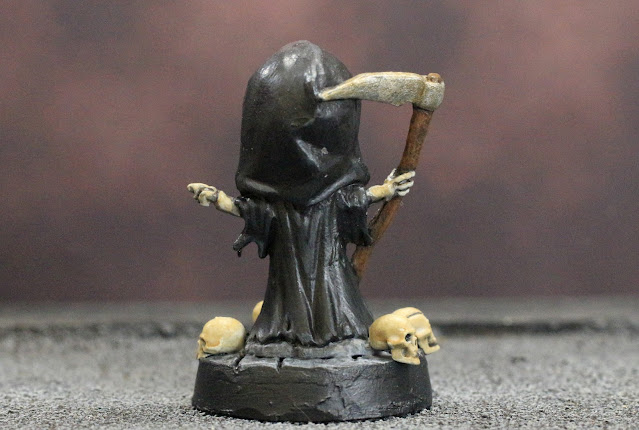 Next I layered on Bonewhite, and then added some Ivory for the final highlights. I thinned some Seraphim Sepia and used it as a glaze to tie the highlighting together and add a touch of shading. Morty's teeth were given a dab of Ivory to make them stand out.

All the skulls were painted the same way, and then the base was highlighted with Neutral and Ghost Greys. The skulls were glued in place, which is when I discovered one had vanished, and the whole ensemble was given a coat of matte varnish.

Morty took all of about 45 minutes to paint, and as there's not much I can do with him he's heading for the display case. He was fun to paint and it I do feel good about rescuing him from the dust and dog hair he's spent probably a year living in.