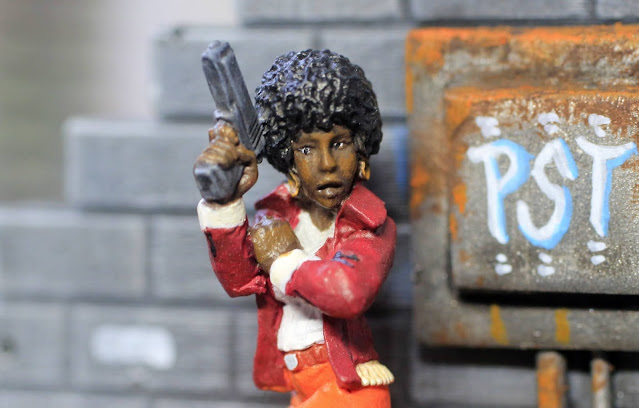 Destiny was dragged to a fancy-dress party by her boyfriend Horace, who promptly abandoned her to chat up a couple of hot chicks. She stormed out only to discover herself in the middle of the zombie apocalypse. Grabbing a gun off a dead cop, she's been dealing death ever since but she's saving one bullet for her now-ex.
I ordered Hasslefree's Destiny a while back — I think it was in July? — and despite looking forward to painting her, I obviously totally forgot about her. I dug Destiny up a couple of days ago and realised she'd be a good entry for Fembruary, so here she is in all her 70s glory. 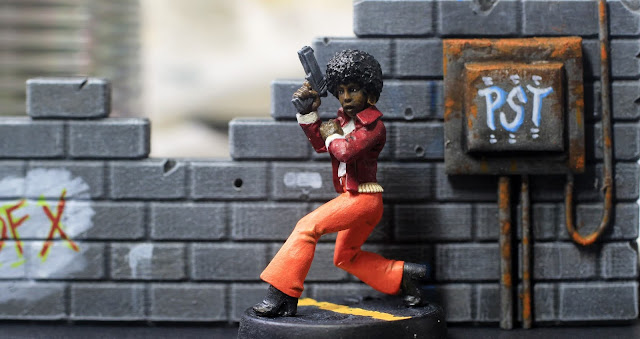 I googled "1970s black women fashion" and the first image was a woman in bright orange flares, so that made life easy. A Heavy Orange undercoat for her Lionel Blairs with a covering of Bright Orange gave me the perfect colour. Her jacket is Black Red with Red highlights, and her shirt is just white because I stupidly did the jacket first and didn't want to get another colour all over it. The part of her shirt above her arm is basically just primer.
Her skin is Burnt Umber highlighted with Light Brown. Her eyes are... done. Let's just leave it at done. 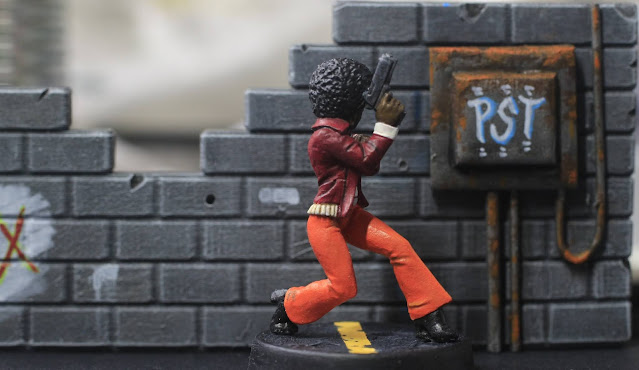 The wall is the second one I've painted. Unlike the original I did earlier this month, I decided to go with a breeze block look in greys. While slapping on some Neutral Grey I had one of those inspirations that comes out of nowhere. Digging around in my bits box I found the lid off a resin wheelie bin and some plastic rod. Perfect! 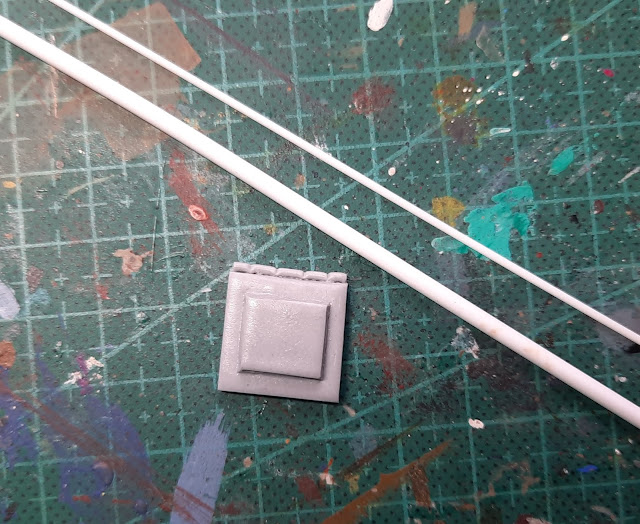 After cutting the hinge off the lid and a lot of bending of rods, superglue, and swearing, I had an electrical junction box thingy:

I painted the box and cables with more Neutral Grey and a coat of Plate Metal, then slammed it with watered-down Black Wash. Once that was done I cracked open the Vallejo Dark Rust and Rust and gave it a thorough daubing. I painted out the blue smiley face because I thought it was crap.

Here's the completed wall. Lots of greys, black washes, more grey and more washes. I took Roger's advice and added some chips and cracks to the bricks and a few bullet holes with the pin vice. The shitty graffiti to the left was not Roger's idea and was the result of me thinking I could do it when I obviously can't freehand to save my life. I'll probably paint it out in the future.
Labels: endertoys, female, fembruary, hasslefree, painting challenge, scenery, survivors, vallejo