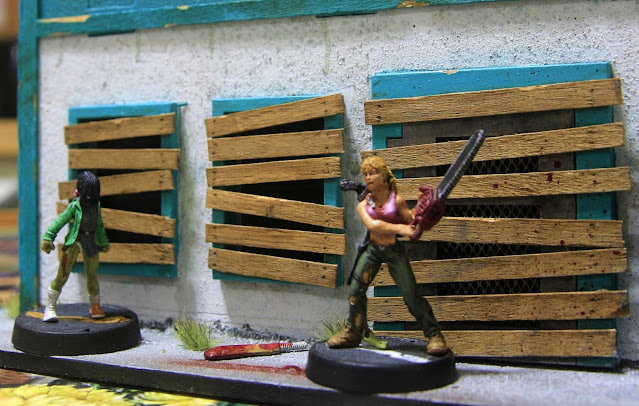 Berkely fires up her chainsaw to battle Suzi for the last roll of toilet paper. Yes, I've finished the store (FINALLY) and I'm happy with it, but pissed off with the crappy photos. 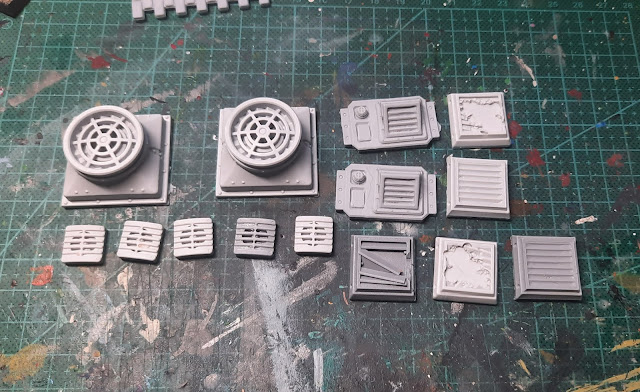 Yesterday the vents I ordered turned up in the mail, which kicked off this drive to actually get the model done. They're bigger than I thought they'd be. I've found this with a lot of TTCombat's stuff; it's advertised for 28mm-30mm gaming but always seems to be on the large size. On the other hand, they're resin and are well made with few moulding issues, which is always an upside to buying TTCombat bits. 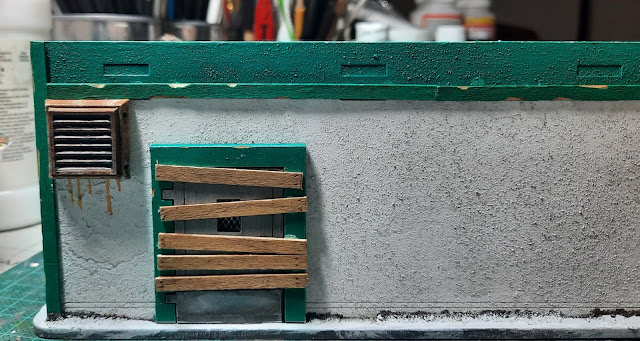 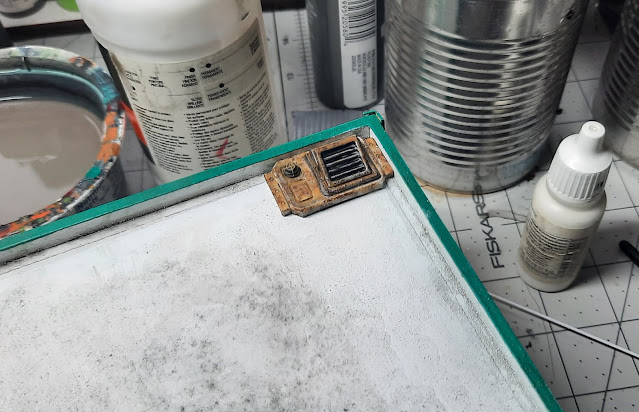 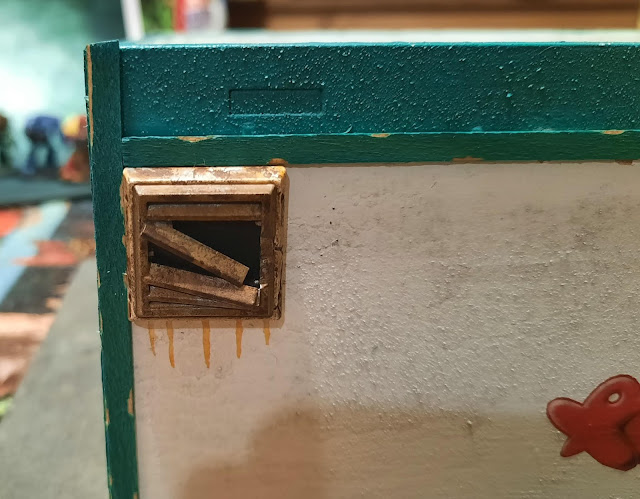 These are the vents I used, painted up in Off-White and Plate Metal, plastered with Black Wash and then Rust and some of my rust wash. I'm not 100% sure about the rust streaks on the walls, but I did my best. The one on the roof needs some rust wash daubed around it. 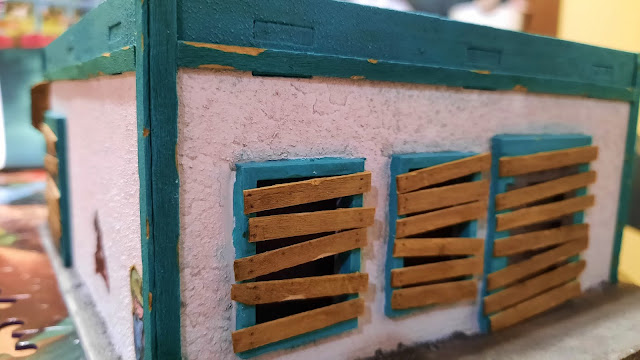 While dry-fitting the wall vents I could see that the coffee stirrer sticks I'd used to cover gaps hadn't actually covered the gaps. Quality control is not one of my strengths. Luckily they'd been stuck on with superglue, so were easy to yank off and re-attach. I took some advice from Zabadak and weathered the boards by slicing strips off them and discolouring them with Sepia Wash. I think they need a lighter highlight, so I'll add that to my to-do list. 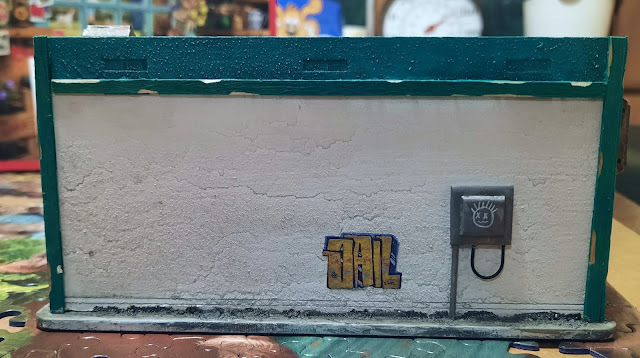 I used some of my graffiti transfers on the sides and back. I'll add some more to fill a bit of space. I had the issue with them that I had when I did my second dumpster last year, in that you have to cut them very close to the actual design to avoid them looking like crap. I bought some Vallejo decal softener back in January and it helped them conform to the rough walls. 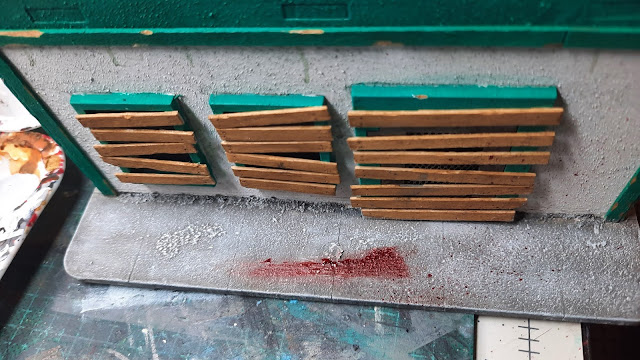 The re-dusting on the pavement I did last week worked well, and I'm still asking myself why I did't do it in the first place. I painted it with Pewter Grey craft paint and slapped on some homemade black wash as I'm running short on my Vallejo stuff. It was drybrushed with more craft paint, this time Granite Grey and a final pass with Vallejo Off-White. I added a blood streak using Blood For The Blood God and a bit of sponge, and some spatter with a toothbrush and toothpick. Zabadak also suggested putting trash on the pavement and that's also on the to-do list didn't get done (sorry).
The following pics were taken on the kitchen table with my DSLR, which provided all sorts of fun and games in terms of lighting and shooting the store. And when I say "on the table" I actually mean "on one of Alicia's half-finished jigsaw puzzles that I daren't move". 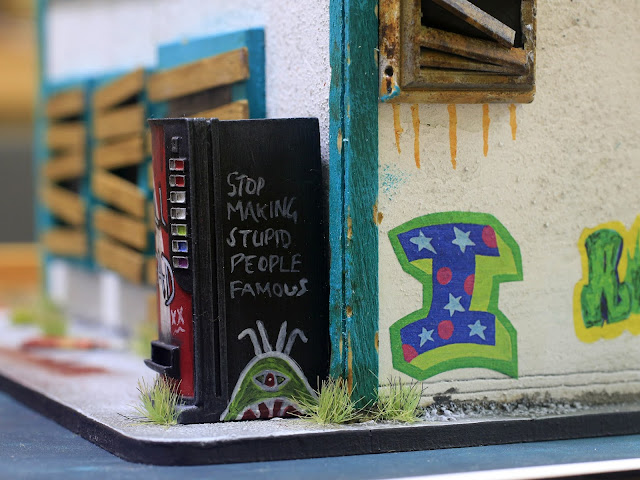 The vending machine was painted and graffiti'd in between painting my Blood Angels terminator. I'm very proud of the little monster on the side, the inspiration for which came out of nowhere. It's only now I realise I've painted the ambulatory cyclops testicle from Monsters, Inc., but I love that movie so it works. On the other hand, I hate painting slogans as the handwriting (brushwriting?) is the same. And I always have trouble coming up with slogans or tags. 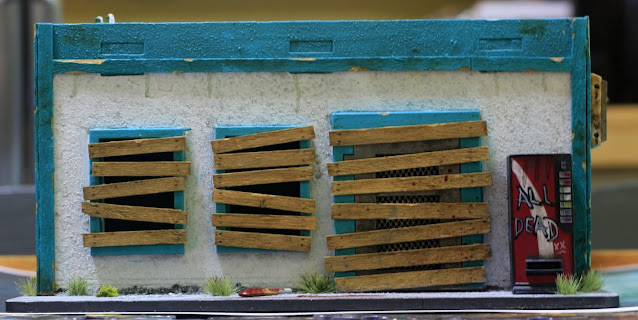 I didn't put the sign on the front, which is a bit crap. The main reason is that I can't freehand letters that large. I don't have access to our printer as it's the other side of the room from my PC, and no matter what Canon's instructions say I cannot get it to connect via wifi. The sign is painted and weathered (which was bloody stupid of me, it needs the lettering first) and I'll add it once I've worked out the printing issue.

The decal medium worked really well, not only conforming them to the rough surface but also acting as a matt varnish. I'm not entirely happy as I have a feeling that in real life the tagging would be bigger and probably wouldn't be in a nice straight line. But it adds some colour and helps fill out the large blank spaces of the walls.

I was tempted to add blood streaks to the broken vent, as if someone tried to escape from it but was nabbed by zombies, but thought it was overkill (no pun intended). 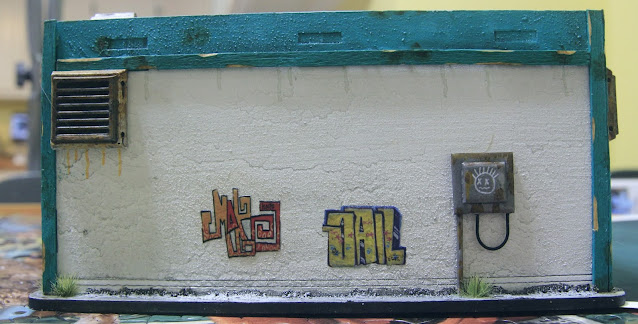 I decided to add a vent to the back just because I'd painted it and wanted to use it. I added another transfer to fill some dead space.

The right side has a few more decals and a vent. You can see on the right that the base has warped slightly, probably from the primer spray. 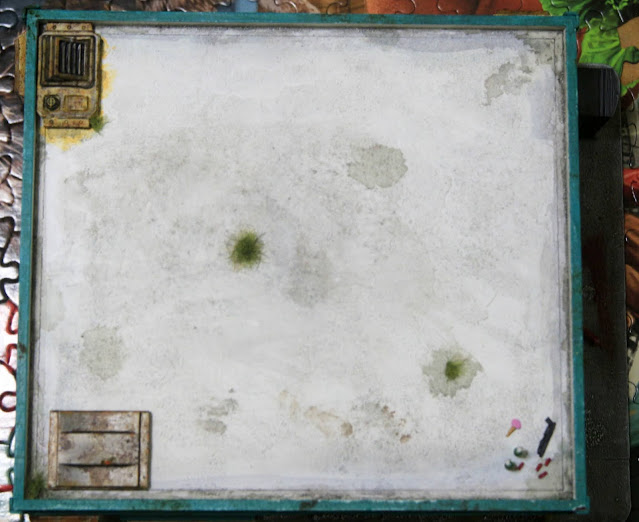 Here's a shot of the roof, which involved changing lenses three times, standing on one of the kitchen table benches and almost being decapitated by our ceiling fan. I stained the roof with a mix of my green and black washes and added a couple of tufts. The bit on the bottom left is a random bit of plastic that came with my desk back in January and was chucked in the bits box. While adding details, I realised that for stuff to be on the roof there had to be a way for people to get up there, and this piece works as a hatch cover after being painted and weathered. 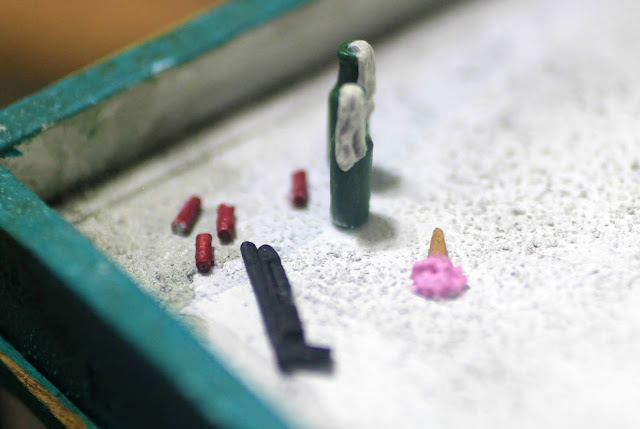 The details on the roof were a bit of a pain to get in place without sticking my fingers to the bits, but well worth it. There are two petrol bombs, a shotgun, some shells and in a nod to Shaun of the Dead, a dropped Cornetto. It's made from the sharp end of a toothpick and some modelling paste painted pink. 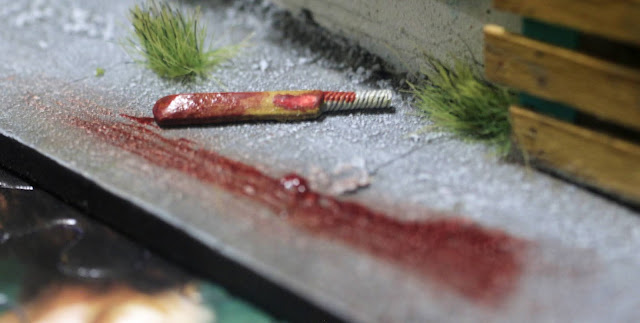 In another nod to SotD I replaced the baseball bat I'd painted with a cricket bat. Plastered in Blood for the Blood God, it's glued next to the streak of blood. I guess Shaun didn't make it to The Winchester. 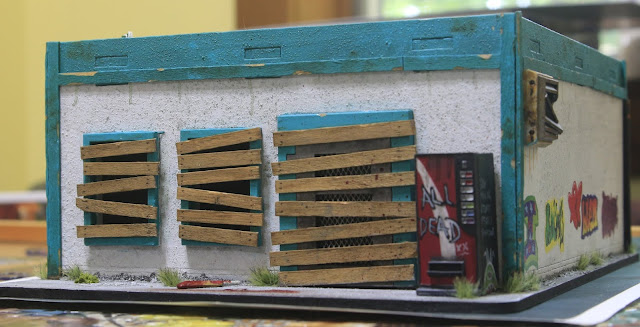 The final step was to add some tufts of varying sizes around the edges and on the pavement to simulate weeds growing in the post-apocalyptic world. They also help to cover little gaps and painting errors.

Overall I'm happy with it, and glad to actually get it done. It was easy to build, dust, prime and paint; as usual the hardest bit was the detailing. It took time but was well worth it as they really add to the look and the narrative of the building. I want to have a go at making my own from foamboard, and if that doesn't work out I'll buy another MDF kit.

And with the shop done, it's back to the egg.