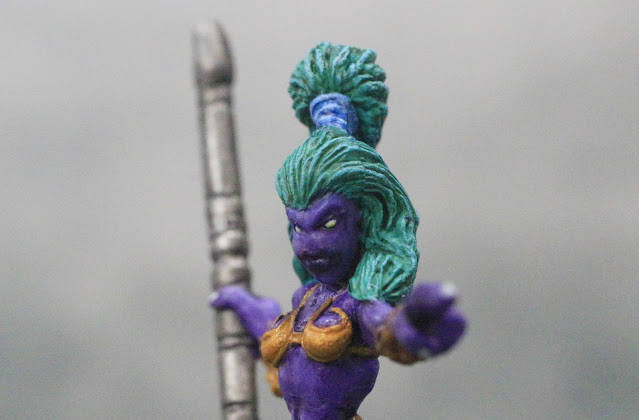 Reaper's Andromedan Hunter, or Andy from now on, was going to be a Fembruary entry only I couldn't find her. I eventually dug her up on February 27, and as I was up to my neck in Vandorendra at the time I put her to one side for the time being.

I think I bought Andy back in 2018, meaning she's been in the Magical Box of Unloved Lead for almost four years. I'd obviously made an attempt to paint her at some point in the past as she was primed and her skin was painted Blue Violet, and I decided to keep that colour and just see what I could do with it. 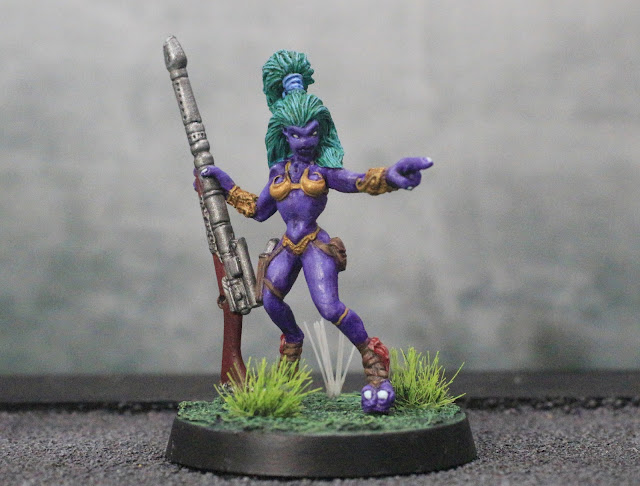 I started by washing all of Andy's skin with Druchii Violet, then began highlighting her with Blue Violet, adding white as I went along. Once the highlights were at a point where I was happy, I hit her bracelets and Princess Leia bikini with Averland Sunset, Brass and Seraphim Sepia, highlighted with a touch of Shining Gold.

With most of her body done I switched to her rifle. As it's sculpted almost like a steampunk hunting rifle I decided on a wood look rather than all metal, with Cavalry Brown and Plate Metal. I used Nuln Oil to shade the metal and then drybrushed it with more Plate Metal and some Silver, and the wood was given a couple of washes of Red Tone and some more Cavalry Brown. 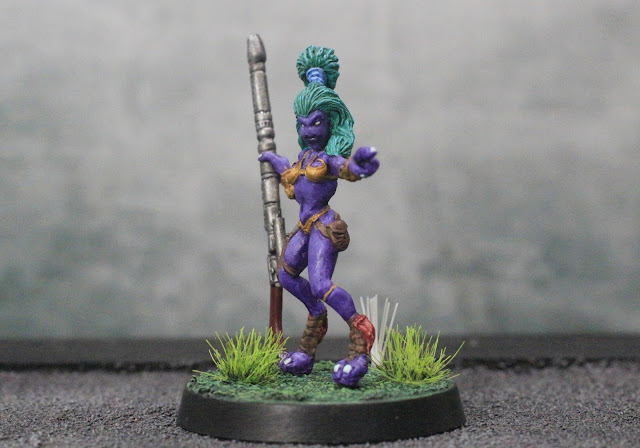 Back to Andy. I was stuck for a colour for her magnificent mane before choosing Emerald Green, shaded with Biel-Tan Green. I added some white to the emerald for the highlights, and then painted her hairband Deep Sky Blue and Sky Blue. Her lips got a dab of Violet and her eyes Green Yellow.

Her leather straps, holster and bag are my usual recipe of Burnt Umber, Mahogany Brown and Flat Earth, and happily they were easy enough to do without getting the browns on her skin. Result! 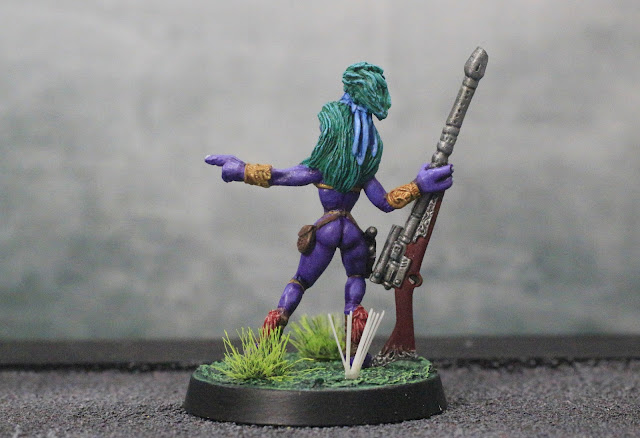 She has some furry things hanging off the backs of her ankles, and I had no idea if they're decoration or some weird alien body hair. I decided on the former and painted them Mephiston Red, highlighted with Heavy Orange.

I finished her off by painting her nails White, but they stuck out like a condom machine at a convent so I redid them Verdigris to go for more of an alien look.

Thankfully Andy doesn't come on an integral base (HOORAY!). I coated a 32mm base with Black Lava paste and painted it Heavy Black Green, drybrushed with Park Green Flat and a touch of Yellow Green. I daubed a couple of tufts with Scorpy Green and stuck them on, and the white "shoots" are actually bristles I clipped off a toothbrush. I'm not entirely sure they work.

Andy looks like she should be in a standoff with Betty. She's a cool mini with a whopping gun and, as with so many other scantily-clad Reaper figures, an arse you could bounce bricks off. Although she won't fit into the zombie apocalypse she's a welcome addition to my collection.