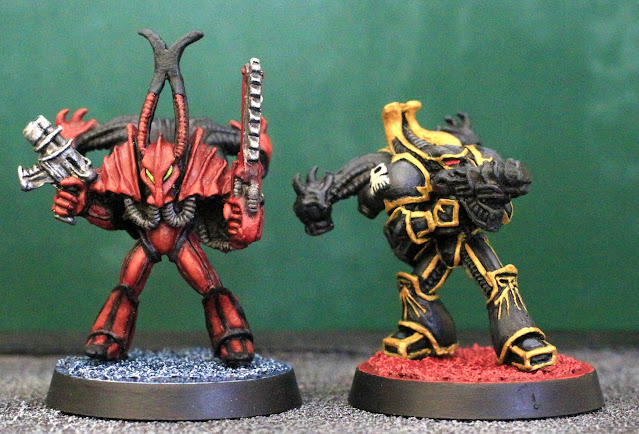 I've always loved these old Renegade models and owned a couple back in the day, on which I did an appalling job with Titillating Pink, Snot Green and Red Gore (remember those colours?). I stumbled across this pair on Ebay last year and immediately bought them, and a couple of days ago I finally got around to painting them. 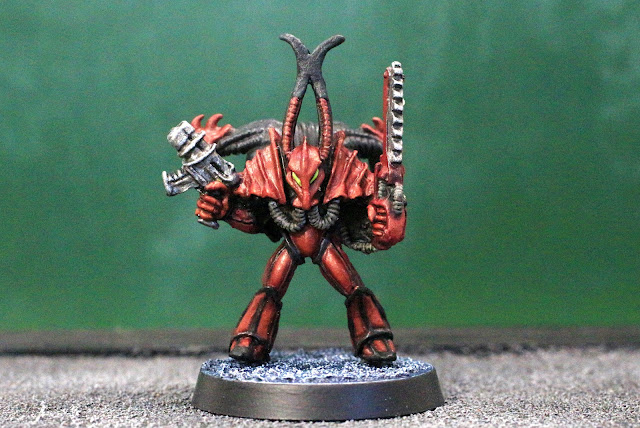 I kicked off with this chap. Although he was painted as an Emperor's Children marine when he appeared in 'Eavy Metal (for some reason in green armour) I think he looks more like a fan of the Blood Throne, so black and red was the way to go.

After attempting to paint the panel lines black and getting it on the white primer, I gave up and just painted the whole model Abbadon Black (my Vallejo Black is on its last legs). Once that dried, the armour plates were all painted Khorne Red and then it was a case of layering on other reds, much like I did with Elli. Mephiston Red, Flat Red and Wild Rider Red were all used, and in real life the layering shows up way better, especially on his shoulder pads. 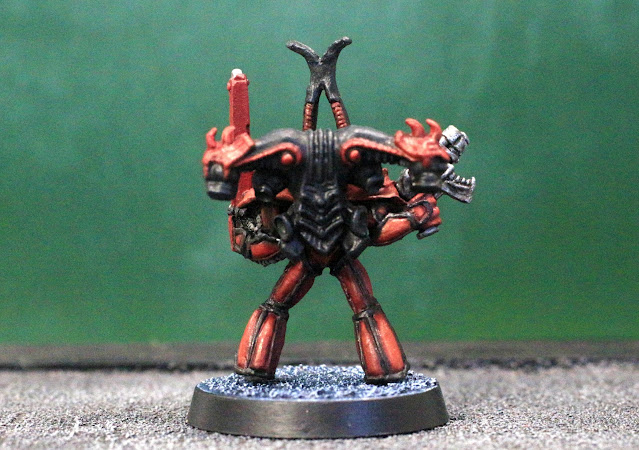 His bolt pistol got a coat of Ash Grey followed by Plate Metal, a wash with Nuln Oil and highlights of Silver. The chainsaw blade was done the same way, and all the tubes are Grey Seer with two coats of Nuln Oil to shade and darken them.

I thought about doing the horns Brass, but decided to stick with Abbadon Black to match the armour. I've never been a fan of painting backpacks as I find them boring to do, so his got a very simple scheme. Some Scorpy Green on his helmet lenses finished him off.

His base is very simple: just Vallejo Black Lava Paste painted Neutral Grey, washed with Blue Tone, and drybrushed with Neutral and Ghost greys to strongly contrast with the model. While I was painting the first one I decided to do this one in black and gold like a member of the Black Legion. He was painted all over with Abbadon Black, which was highlighted with Black Grey and Mechanicus Standard Grey in thin layers.

Ever had one of those minis where 99% of your thought process while painting it is "I'll touch that up later"? This is that model. I went over the panel lines with Averland Sunset, getting it on the black (of course) and then went over it again with Brass, getting some of that on the black too. Finally the Brass was done, the black was touched up and I could move on. 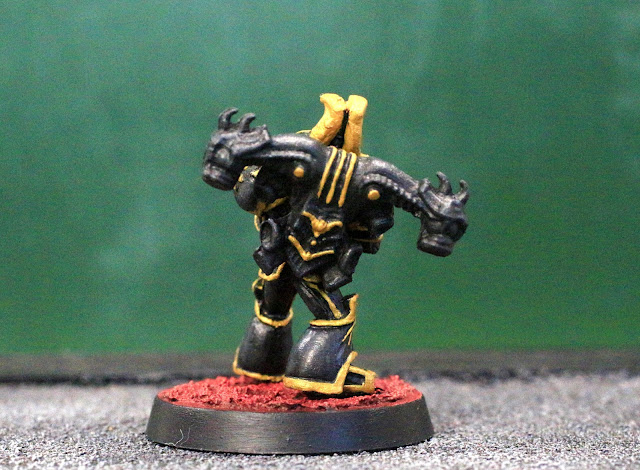 To finish him off I did his eyes Wild Rider Red and the skull on his shoulder pad Aged Bone and Bonewhite. He has the eight-pointed Chaos star on his other pad, which is Brass. This chap's backpack is also very basic, with just some bits in Brass to break up the black. and grey.

Again I went for a high-contrast base. It's Vallejo Black Lava painted Khorne Red and drybrushed with Mephiston, Flat Red and Wild Rider Red.

I really enjoyed getting this pair of Renegades done. I think that these sculpts do a way better job of portraying Marines who've fallen to Chaos than the new sculpts, where homicidal maniacs like the World Eaters are all wearing the same pristine armour. These ones do a much better job of showing the effects of the Warp on the Emperor's finest.