Zombie hunters part 3: A bit of a mix 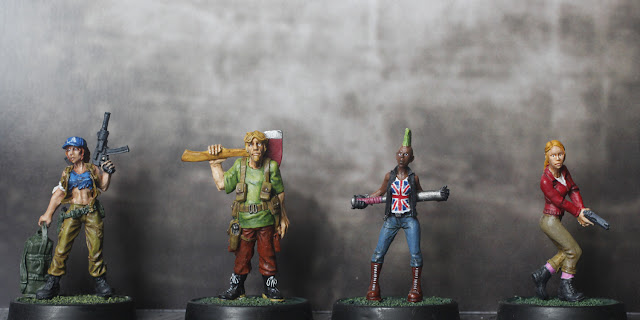 Four more intrepid zombie hunters line up for your perusal. From left, say hi to Evie, Woolsey, Joanne and Taylor. 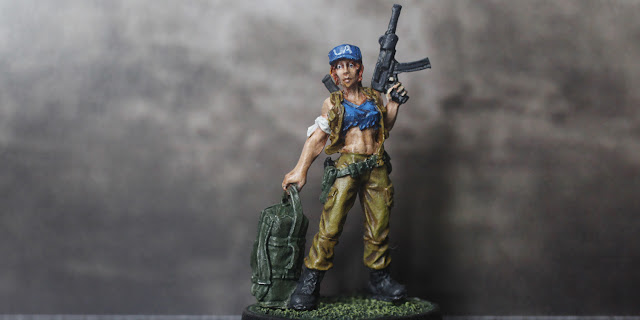 Evie had to put up with a lot of stick about her disaster prepping, but who's laughing now? With her trusty kitbag and gun and lots of experience of dodging dead people she's better equipped to survive the post-zombie world. Evie became the group's (reluctant) leader simply because she's the only one who knows what she's doing.

Reaper's Evie, sculpted by Julie Guthrie, was an impulse buy from Amazon, one of those minis you chuck in your basket to reach the free shipping total. I painted her in one sitting, which for me is pretty amazing (as I write this there are six(!) other figures on my desk in various stages of completion). I think she's one of the best figures I've painted so far, although her eyes are a bit starey.

Her trousers and tactical vest are Vallejo English Uniform shaded with Umber and Sepia washes. The belt, holster and kitbag are Black Green and her t-shirt and hat are Magic Blue (I picked blue just so I could give her an LA Dodgers hat). 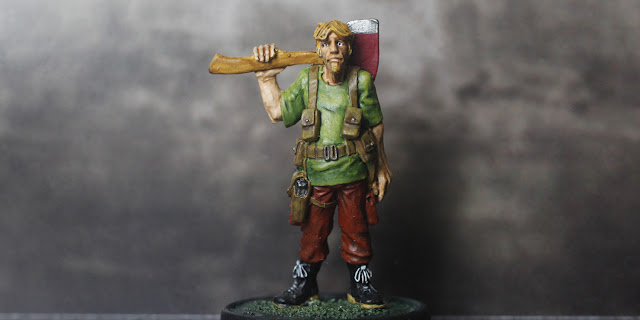 Woolsey lost track of his three friends when he nipped out for a "cigarette" and found himself surrounded by shambling dead people. In the weeks since then he's become adept at hacking into necks with his giant fire axe and as long as he's got a plentiful supply of sandwiches and snacks, he's a happy bunny.

He's another excellent Hasselfree sculpt (as are the next two) and was a joy to paint despite having more pouches and straps than a Rob Liefield comicbook character. Once I'd googled images of Shaggy, I painted his t-shirt Vallejo Olive Green and his trousers Cavalry Brown. Japanese Uniform was used for the straps, holster and pouches, Black for his boots and his giant axe is Golden Brown shaded with Sepia tone, Red and Plate Metal. Pretty much everything went right while painting Woolsey, which is a nice change for me as I usually hit some snag or other. 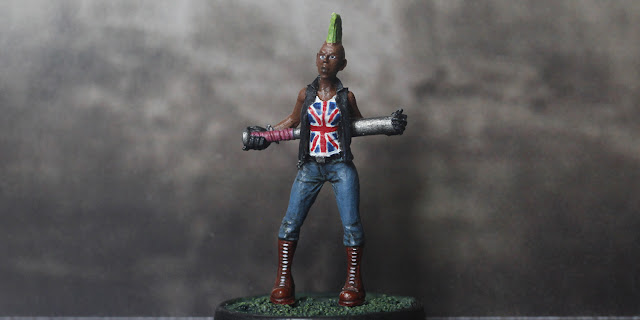 Joanne was watching her fave band when she realised that while audience members gobbing on each other is acceptable at punk gigs, biting their arms off isn't. Since that day she's dealt death to countless zeds with her trusty baseball bat. Which she nicked off the corpse of a zombie Little League player. After she'd kicked him to death with her DMs. That's how hardcore she is.

Let's get the obvious thing out of the way: her eyes are AWFUL. This is because they're bloody tiny and I don't have an electron microscope and a 10-nanomillimetre brush. On the other hand, just look at that t-shirt. It's the design I wanted to paint on Sid but didn't have the confidence to do so. In Joanne's case I managed to overcome my tendency to overthink things, picked up my Vallejo Flat Red and Prussian Blue, and just went for it. And it worked. The Union Jack isn't perfect but I'm really happy with it. Now I need to come up with other designs for minis' t-shirts and stop doing them in one colour.

Joanne's skin was straightforward: Vallejo Burnt Umber shaded with Umber Wash and highlighted with Mahogany. I wish white skin was as easy to paint.

Her jeans are Blue-Grey with Black Wash slathered on to make them look dirty. Her Doc Martens are Cavalry Brown and the magnificent mo' is Yellow Green layered over Army Painter Jungle Green. 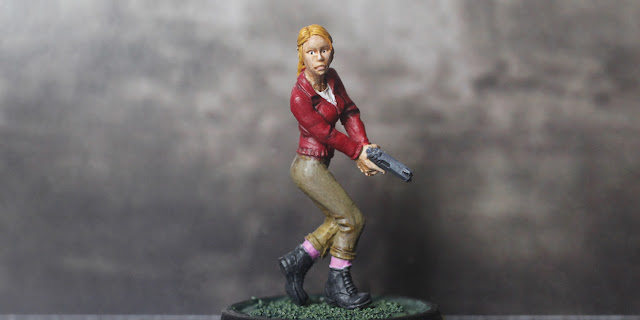 Taylor used to work in PR and has had a hard time adjusting to spending her days shooting dead people in the head rather than picking the right colour scheme for another toothpaste advert. So far she's tended to run in the other direction when she spots a zed-word but is slowly learning to live in a world without Starbucks and Twitter. On the upside Taylor got to shoot Karen from accounting, so yay. She is secretly in awe of Evie and secretly terrified of Joanne.

Taylor's mini has plenty of dynamism. She also looks slightly nervous, which makes a nice change from the "come and have a go if you think you're hard enough" expressions on some minis. She was very easy to paint: her top is Vallejo Flat Red, her trousers Khaki and the only thing I sort of regret are the pink socks.

All the minis are based on modelling paste sprinkled with sand and painted dark green, as I wanted a change from the "road" type bases I'd done for all the other zombie hunters.

Coming soon: Zombie hunters part 4: How many of these does he own?
Labels: basing, female, hasslefree, horror, reaper, survivors, vallejo, zombie