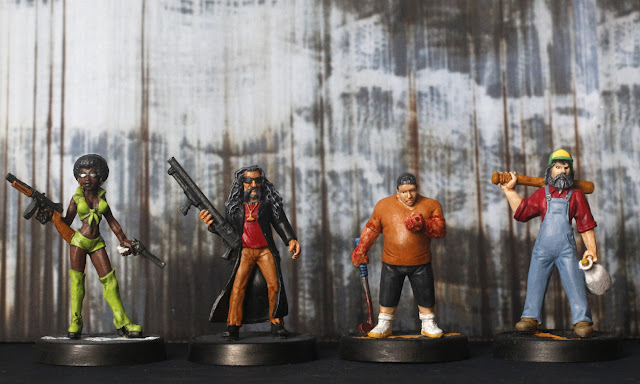 Today's post is brought to you by Cleo, Mike, Tony and Billy Joe. 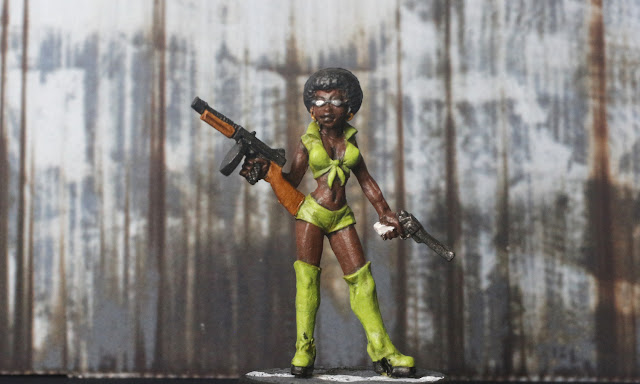 Since becoming separated from her sister Ebony at the fancy dress party, Cleo has spent every day either wondering how her twin is doing or ruing her costume choice of lime green hotpants and thigh-high platform boots. And the zombies. She totally rues the zombies.

Cleo, by Reaper, is another figure that prompted an "is this racist?" argument discussion between me and Alicia. In happier news her skin tone — Vallejo Chocolate Brown shaded with Burnt Umber wash, highlighted with Chocolate Brown and Light Brown — worked really well again. I needed a solid 70s colour for her clothing and Vallejo Golden Olive highlighted with Army Painter Jungle Green worked as a stand-in for lime green.

Her tommy gun is Black and Orange Brown, and it's the only thing I don't like about this sculpt. It's just... anachronistic. Also, where does she keep those weapons, or does she just hold them all the time? 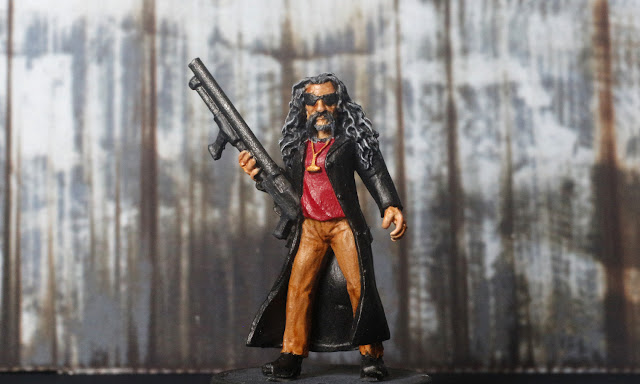 Biker gang member Mike doesn't have a bike any more, or for that matter a gang. But he does have a shotgun and knows how to use it. The sole survivor of a zombie rampage through his neighbourhood, Mike managed on his own for a while before finding a group to join.

Reaper's Mike Noe was a straightforward paint job. The only issue was the black: basically, trying to make the same colour look like leather, metal and plastic. His coat got several washes of Army Painter Blue Tone to give it some depth and sheen and the metal bits of the gun were washed with Chainmail and Black Wash for a metallic look.

Some Flat Red for his shirt and Orange Brown for his trousers and he was done.  His hair has lots and lots of texture to it, so making sure I'd actually covered it all in black was fun and games. 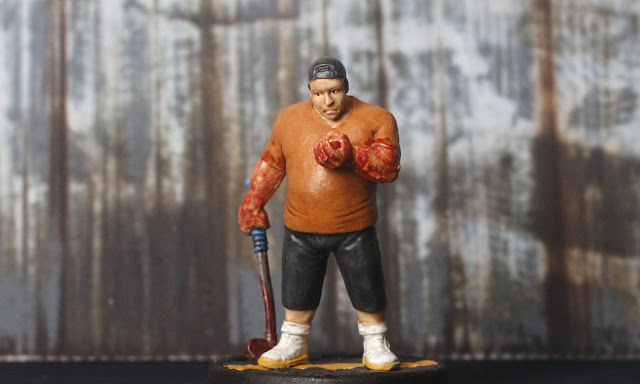 Tony lost his friend Ray when the zeds started taking a bite out of the general population. Surviving on scavenged beer and snacks means he's probably the only apocalypse survivor to gain weight. His habit of continually checking his phone is really starting to annoy the other group members.

Oh god, the skin tones... they're terrible, hence the blood soaked arms. Tony is Hasslefree's version of Ed from Shaun of the Dead, although I don't know why sculptor Kev White armed him with a golf club instead of a shovel. I do love how he's ignoring the surroundings to answer his mobile because Noodle's called asking if he has any dope.

I can't explain where his orange-brown t-shirt came from as Ed wears an off-white/pale green one in the movie. That'll teach me to google this stuff before painting the minis. So, Vallejo Orange Brown for his shirt, Dark Grey for his trousers, Off-White for his boots. The gore is courtesy of the ever-reliable Citadel Blood for the Blood God, and he really needs a splat of it across his shirt. You can't see it in the pic, but his phone is bright orange in honour of my old Nokia 1260. 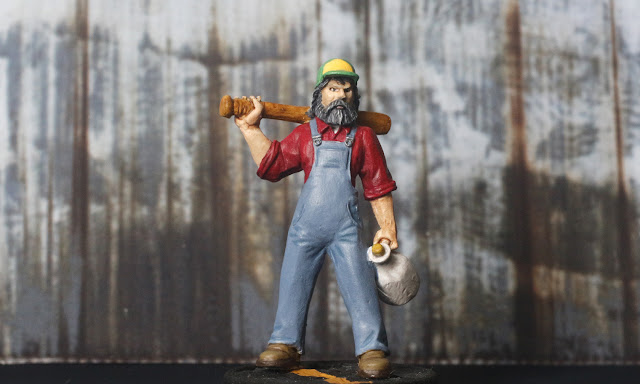 Billy Joe had only popped into town to pick up some more ingredients for his "home wine-making business" when he found himself in the middle of a flesh-eating horde of undead. Grabbing a baseball bat from a sports store he's kept himself alive with the aid of brute strength and copious amounts of illegal alcohol.

Reaper's Billy Joe is a mini I'd thought about getting for a while. I finally decided he'd make a good addition to my zombie hunting collection. I used Vallejo Blue Grey for his overalls and Red for his shirt. The moonshine jug is Ivory and Off-White. I've seen them painted to look like they're transparent, but there was no way I was going to attempt that. His hat is based on a John Deere one I found online.

As I'd already painted two other baseball bats to look like aluminium, I decided to go for an old-fashioned wood look for Billy's with Vallejo Light Brown and Sepia Wash.

As usual all the bases are Liquitex Modelling paste painted to look like a road surface.