Here's another team of normal people forced to fight for their lives against overwhelming numbers of flesh-eating undead nightmares. Say hi to Lisa, Ken, Red and Beth.

I have to admit, painting some regular humans after a month of Lovecraftian horrors makes a nice change. All these guys are Hasslefree minis, from their Modern Adventurers series.

I've recently mixed up my own skin tone. For white people I normally go with Vallejo Basic Flesh, but it's very light and doesn't cover well. I have Heavy Skin Tone, which is a base for flesh, but it's too dark. I've been mixing the two on my palette for each mini as I go, but last week I decided to find an empty dropper bottle and make up an actual pot of the stuff so I don't have to keep trying to match the shade for every figure. It's about 75% Pale Flesh and 25% Heavy Skin Tone. Look at me making my own colours! Next I'll be learning how to sculpt, or maybe even paint straight lines. 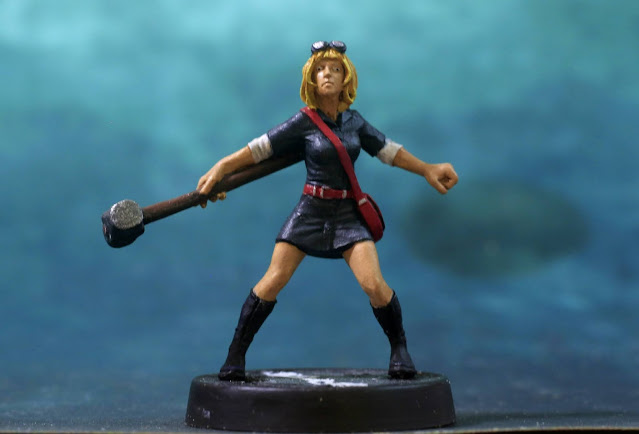 Lisa Lambaste, to give her her full name, worked in fashion but the rising of the dead put an end to just about every trend she'd ever believed in. Armed with a ten-pound sledgehammer, she's not afraid to bash zombie skulls whenever she gets the chance.

I originally wanted to paint Lisa's dress white, and after my success with Ahmed's suit I was all for it. But I bottled out and was tempted by the dark side, in this case Black Grey, with Red and Flat Red for her bag and belt. Given my recent experience with yellow, I was going to paint her as a brunette, but instead went for the Gold Brown and Sunset Yellow look for her hair and to my surprise it worked. I don't know why she has those goggle things — it's one of those little details that annoy me because it's just unnecessary — but they weren't too hard to paint. Her sledgehammer is Mahogany Brown and Gun Metal. 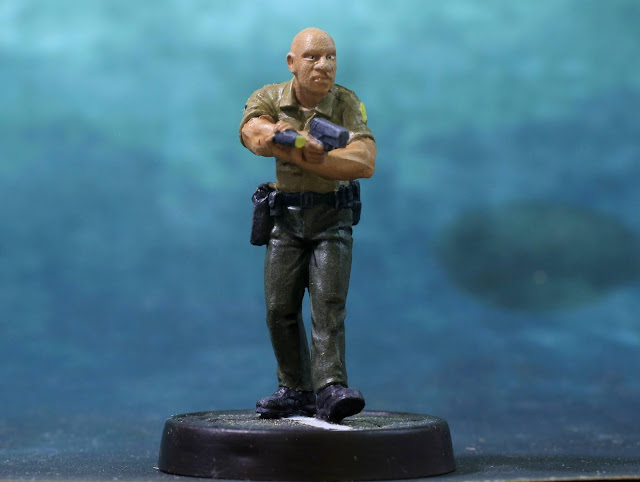 State trooper Ken managed to run out the back door of his station just as the zombies were coming in the front. He's lost his shotgun and hat, but is determined to keep serving and protecting.

This figure is supposed to be a mall security guard, but I decided to paint him as a Vermont state trooper. He comes with a choice of weapons: a pistol and torch, or a shotgun. I went for the pistol as I've already got a cop with a shotgun. Ken's shirt is Khaki shaded with Sepia Wash, and his epaulettes are Mutation Green. Some Olive Grey for his trousers and and a spot of Lemon Yellow on his sleeve patches and he was done. 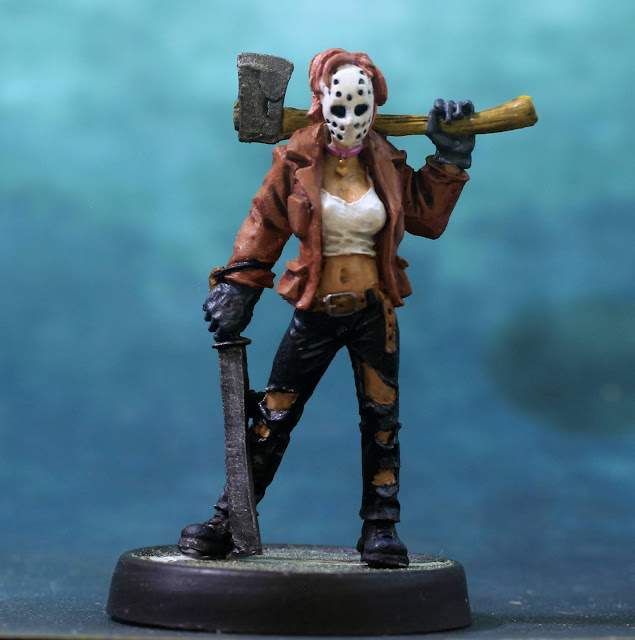 Red Raine is over six feet tall, very handy with her machete and axe, and never removes her hockey mask. The rest of the group don't know much about her, and none of them have the courage to ask. Which is a shame as she has a vibrant inner life and used to be an elementary school teacher before her class tried to eat her face.

In keeping with her name, her jacket is Red Leather shaded with Red Tone and Sepia Wash. I used Black for her jeans and boots, and Off-White for her shirt and mask. Red's hair is Cavalry Red with Heavy Orange for the highlights, with Japanese Uniform and Gun Metal for her axe and Plate Metal for her machete. 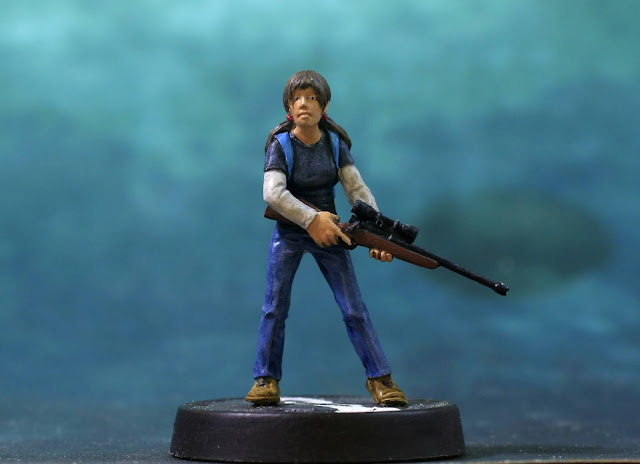 Beth was alone at home when the zeds started to attack the living. Grabbing her dad's hunting rifle she managed to escape and teamed up with Lisa after rescuing her from a zombie attack.

Beth is Hasslefree's version of Carol from The Walking Dead Ellie from the videogame The Last Of Us (thanks, Chris!). She's a lot shorter than I thought she'd be, and seems to be a teenager rather than an adult. She was the first one I painted, with Blue-Grey for her jeans, Black Grey for her t-shirt and Deep Sky Blue for her backpack. The only issue, and it turned out to be a big one, was that the barrel of her rifle bends if you so much as sneeze within two feet of it.