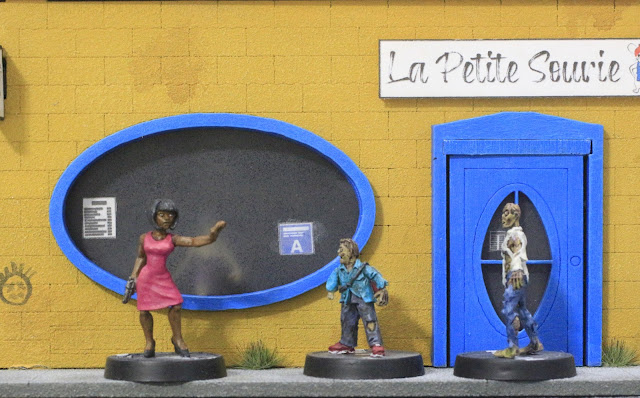 Pam fends off a couple of zees outside the French cafe on the high street. Thoughts of delicate pastries and strong coffee briefly flit across her mind before she shakes them off and raises her pistol.

La Petite Sourie is a real place; it's a French cafe and bakery in Santa Ana, CA, where me and Alicia would go to to solve all the world's problems while drinking lots of coffee and smoking lots of cigarettes. Their chicken baguettes, French toast and cakes are absolutely amazing, and they'd even give Cadbury a bowl of water and some chicken when I took him along.

When this building turned up in the mail I originally had the idea of doing it as a sweetshop (candy store to the Americans), painted pink and called The Candyman after a shop in the Welsh town where I used to live. But then La Petite Sourie popped into my head, so I flipped a coin and the French won. 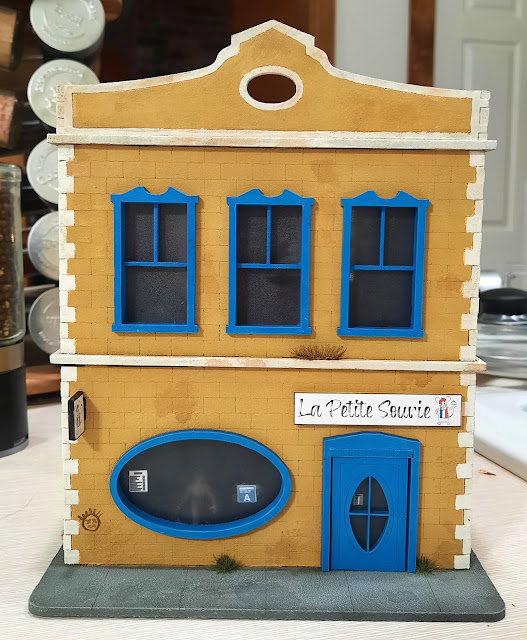 This one took a bit of light hammering to get the floors to go together properly, but that aside construction was as easy as all the others. It was sprayed with the grey texture paint and spent the now-mandatory night in the garage to dry and stop stinking up the place.

I'd already decided to use a craft paint called Kings Gold to paint the exterior, and instead of doing a two-colour scheme I wanted the whole building to be yellow. Here's a visual representation of my thought process before I started painting: 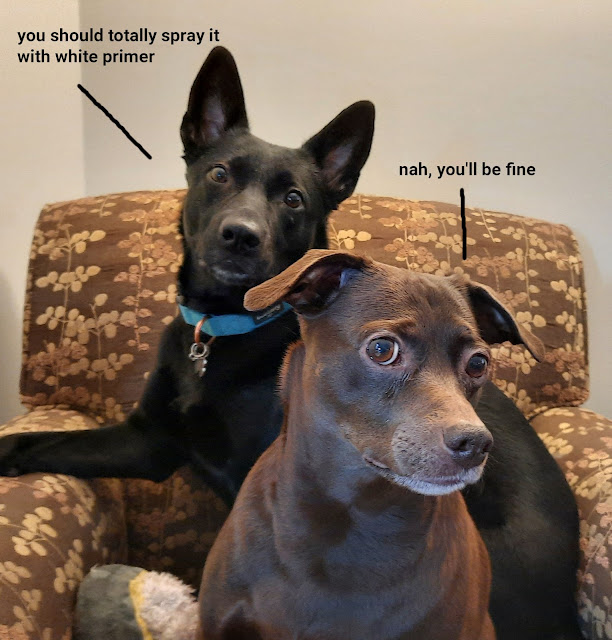 Well, it turns out Erebus was right as it took about six coats of Kings Gold to cover the grey to the point where I was happy with it. Thanks, Cadbury. I think that part of the problem was being so used to Vallejo and Citadel paints drying within a minute or two, I wasn't waiting long enough between coats and was reactivating the drying paint every time I put a new layer on. Eventually I just left the building overnight and gave it the final coat the following morning.

In between plastering the walls yellow, I painted the doors and frames Magic Blue and highlighted them with Electric Blue. I also cut out the windows from the plastic sheet and printed out the signage. 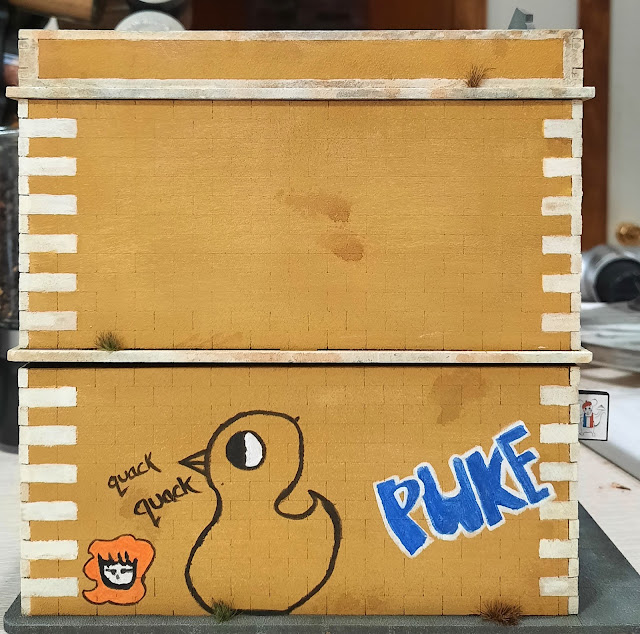 Once the final coat of yellow had totally dried, it was slathered with thinned homemade black wash and then highlighted with a mix of Kings Gold and Antique Parchment. The roof trim and edges of the first floor and roof were painted Antique Parchment, shaded with more thin black wash and highlighted with White, and the roof and pavement were done with Pewter and Granite greys and daubed with black and sepia washes. 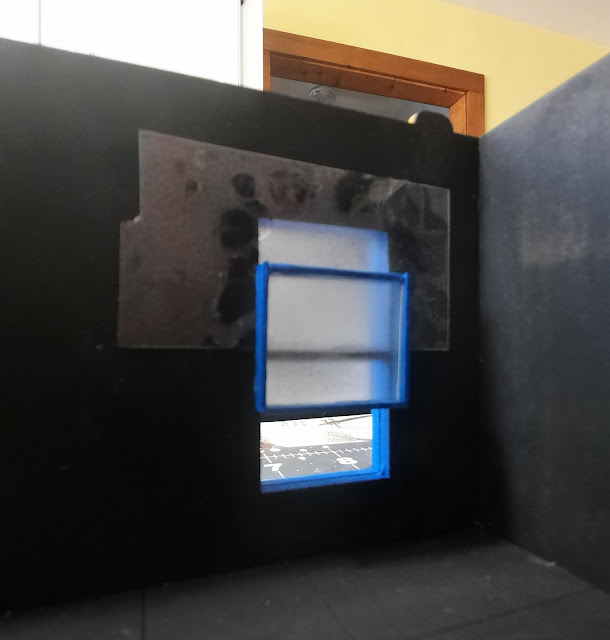 One detail I wanted to do with this building was have one of the rear windows open with a rope made from bedsheets hanging out of it, as if some poor buggers tried to escape the zed onslaught. I created a window from a coffee stirrer and a square of plastic sheet and glued it to the inside. Then it was just a case of making the rope.

I asked Dave (who once again got an email from a Welsh weirdo in Vermont at an ungodly hour) for the dimensions of a bedsheet in 28mm scale, and he replied with 35x20mm. I cut three pieces out of paper towel, and then realised I was doing my usual overthinking as I could just use a single length of paper towel. After cutting it into the shape I wanted, I soaked it in PVA glue and let it dry. The "knots" are just small thin strips of more paper towel soaked in matte varnish. I twisted the strip in three spots and wrapped the varnish-soaked strips around the twisted bits. 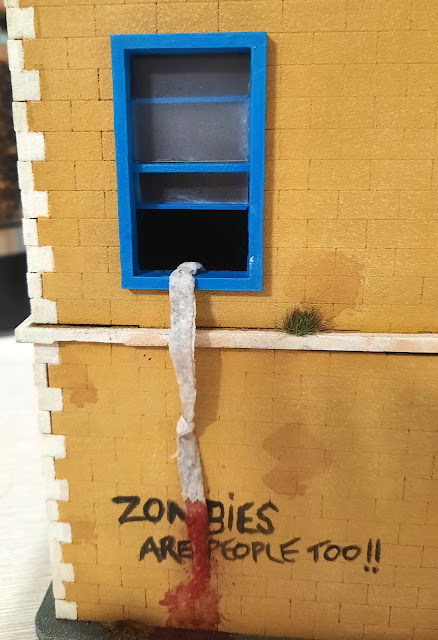 I decided that a zombie apocalypse wasn't the place for a happy ending, so I dragged the end of the rope through a small pool of thinned Blood For The Blood God. I then painted the slogan on the wall, and splattered and daubed some BFTBG on the wall and pavement. The rope was then glued to the floor of the room, and two blobs of PVA held it to the windowsill and the wall. I think it works. 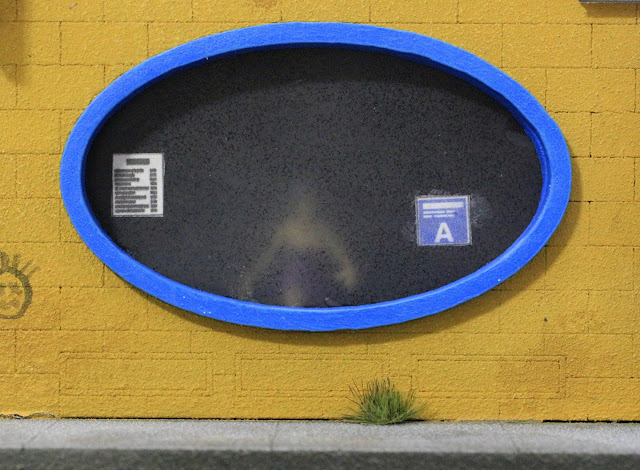 This is another building that comes with a canopy, and in this case it's the width of the front. I didn't want a sign that long so I made two smaller signs out of printed images and foamboard. The menu and hygiene rating were stuck inside the window and the opening times inside the door glass. I wanted something else, so I popped one of my zombie vixens off her base and glued her just inside the window. You can barely see her, but she's there. 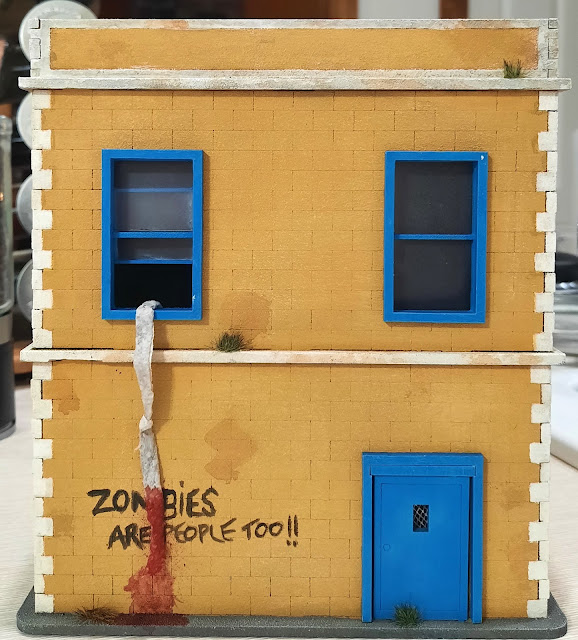 I really liked the white trim and decided to add more by painting bricks on the edges. Here's a visual representation of my thought process before I started painting: 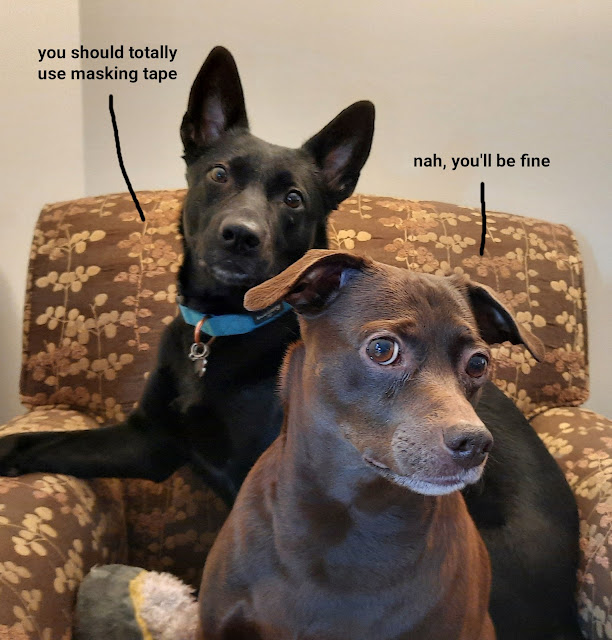 Once again Erebus was right. They look OK from a distance but are messy close-up. 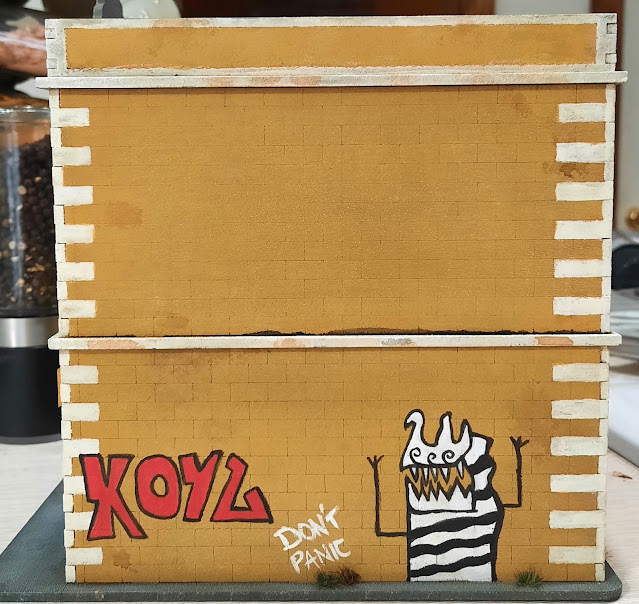 After adding some tufts it was basically done, except the graffiti, which was painted on in no time. The monster is nicked from a photo I found on google, as is the duck.

So that's the final building (for now) done! That's four this month, it's like Season of Scenery only with snow. Speaking of snow, here's Friday night's fall: 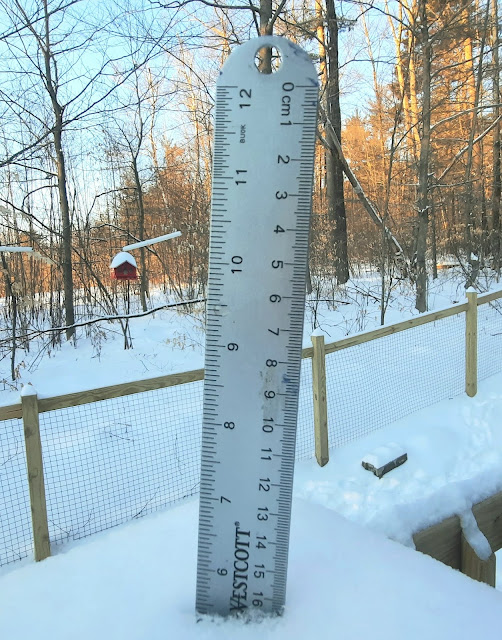 I think we're into Vermont's second winter, so only five more to go before we get to spring. I'm hoping to get a final Fembruary figure painted before the end of the month... which is tomorrow, so I better get a shift on. Take care!