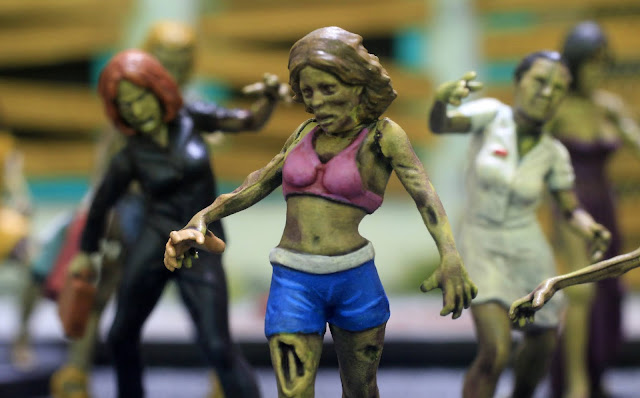 I can safely say I've never before painted so much cleavage. 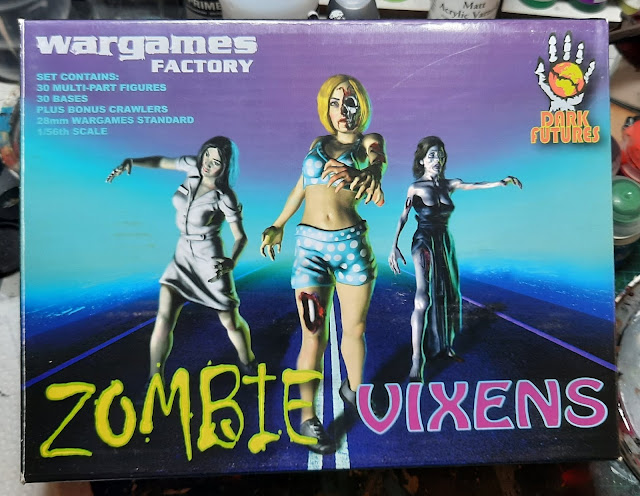 I bought these foetid females months ago, I think maybe April or May, from Noble Knight. They're frequently out of stock so when I saw them I snapped them up.

According to the box, you get enough bits to make 30 zombified women and a couple of crawlers. While this is true, what they don't tell you is that you get three identical sprues, so while you're free to swap heads and arms around you basically have three sets of 10 zombies with identical torsos and legs. It's annoying but on the other hand at $30 for the box and $5 for shipping it works out at just over a dollar per zombie, so it's ridiculously cost-effective. 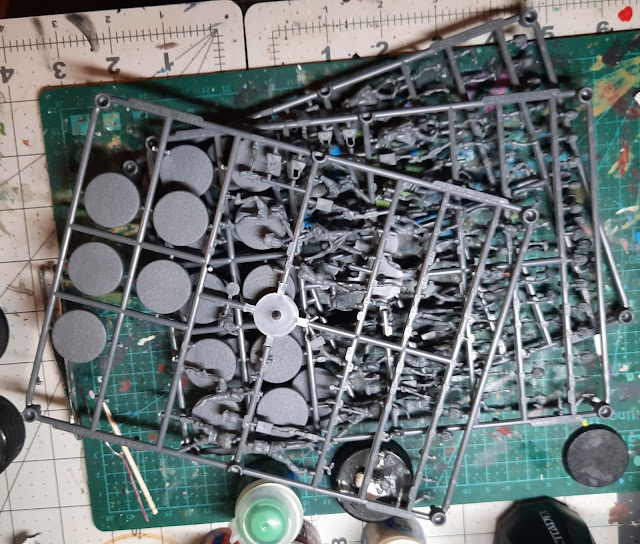 I couldn't work out why some bits are missing, but then I remembered that I'd actually built some of the zombies a few months back yet I cannot find them anywhere. Seriously, they're just gone. Oh well, I have 25 or so left to make, and I cut 10 off the sprues to paint up for Zombtober.

I was invoking the names of the Great Old Ones many times while assembling these. There are flash lines in abundance, so I scraped off as many as I could. Several heads had my all-time favourite, the classic flash line across the hair, so I did what I could with them. Most of the arms also had lines but they're so flimsy I just left them to avoid the chance of breaking bits.

The arms and heads are fiddly and a bit of a bugger to glue on, so I have a few with small gaps which I should have filled. Once I'd superglued them together, which took way longer than I hoped and involved me having to unstick at least two arms and one head from our new laminate flooring, they were ready to be taken downstairs. 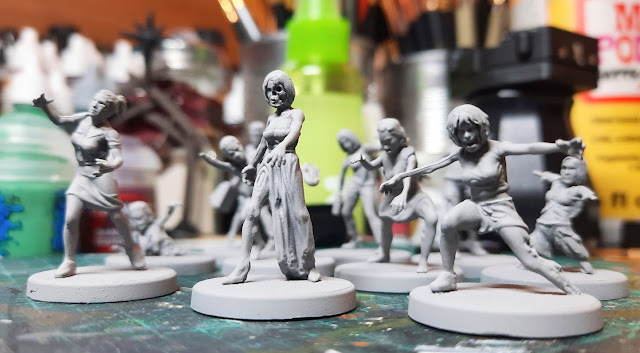 After being sprayed with cheap Dollar General grey primer and left to dry overnight, they looked like this. I basically have the dancing zombies from the Thriller video on my desk. I set about doing the skin first and just plastered them with Dead Flesh, not being too concerned with getting it on the clothing; in the case of the bikini-wearing lifeguard zombie I just painted the entire figure to save time.

Once the Dead Flesh was dry it was just a case of slapping on the Green and Purple tones to get the mottled, rotting look I like and leaving them overnight to dry.

Here's the first five I painted. From right we have Alicia Nursie, Crawler, CEO, Shopaholic and Baywatch. They were pretty easy to paint once the skin tones were done, and I didn't fanny about too much with fancy things like "shading" and "highlighting" in order to just get them done. My main issue was hair colours as I can only do black, blonde and red, so I tried to mix them up as much as possible.

Nursie has a flash line straight through the middle of her face, so I left it as I could see me slicing her nose off if I tried to do something about it. Alicia was amused as nurses don't dress like that any more; the figure should be wearing scrubs (and I should know, I do all the laundry).

I'm particularly happy with Shopaholic, as everything in terms of painting went really well. I did bugger up the bags she's holding because at first I thought it was some kind of expanding backpack before realising they're actually shopping bags. Duh. 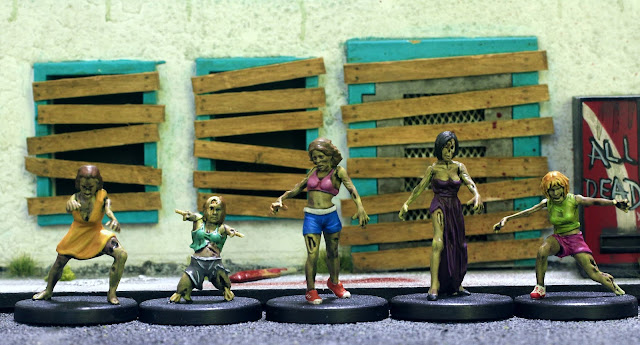 Here's the second set. From left, Nightshirt, Stumpy, Jogger, Posh Spice and Psycho Ex. Like the first five I got through these as quickly as possible which meant not fannying around too much deciding on colours to use. That's pretty much why Psycho Ex looks like a female Joker.

Posh Spice was the easiest to paint with just Violet highlighted with Purple, and I took a deep breath and used my nemesis colour for Nightshirt. It works, I guess. Jogger is probably my fave of this bunch as her colours look great and you can even tell she's wearing Adidas trainers.

My only wish is that I'd had the confidence to paint some kind of pattern or design on some of the clothing, but I bottled it and played safe with solid colours.

One thing I didn't do was base these the usual way I base my zombies and survivors. I normally use a 25mm Reaper round lipped base, tape over the slot, fill it with modelling paste, paint it Black Grey, drybrush it with Neutral and Ash greys, and use masking tape to help paint a white line on it. I wasn't about to burn through a load of those bases, so I used the ones that came with the vixens. I just painted them as usual but didn't bother with the white road marking. If I make more I'll do the bases first with the stripes on. 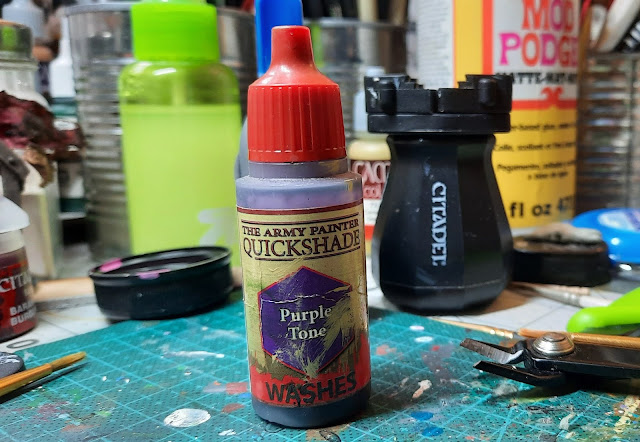 Sadly, I had to say goodbye to my Army Painter Purple Tone, which gave up the ghost after, fittingly, shading the tenth zombie. It's given me sterling service since May 2018 and has been replaced with a pot of Citadel Druchii Violet from my FLGS.