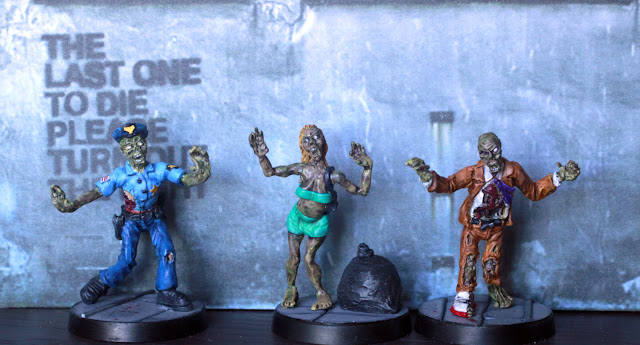 I bought these zombies last spring and didn't get around to opening the pack until a couple of months later. And once I had them in my hands, I hated them.

For starters, I thought they were a bit too cartoony. There seemed to be a ton of flash lines on them (flash is the little bits of metal left over from the moulding process that you have to carve off with a sharp knife) so they would take ages to prep. I also couldn't work out which bit was which. Their hands were really badly cast, with bits all over the place. I chucked them into the Magical Box of Unloved Lead and got on with painting something else.

Anyway, the above paragraph proves what a moron I am. In mid-December I decided to dust these off and paint them and I quickly realised that the flash wasn't that bad. Once primed in white I could see the details better and set to work. 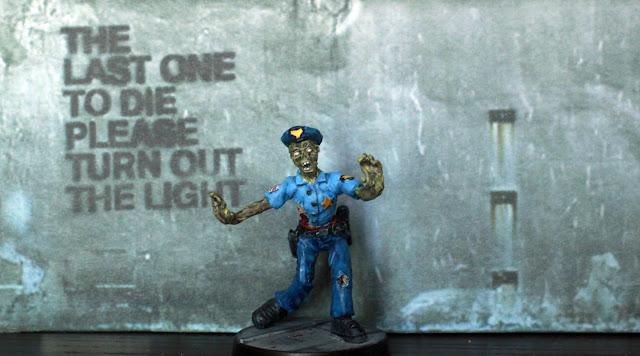 Officer O'Grady was trying to get people away from the zombie horde when he was taken down.

I wanted him to look like a New York cop from the 70s and 80s, mostly because the light blue/dark blue look is the one I remember from watching telly as a kid, and also because of this awesome car, which I used to own. Looking online for examples of the uniform from back then took me down some rabbit holes. My selection of blues was so crap that I had to mix it up with Army Painter Electric Blue for his shirt and Vallejo Dark Prussian Blue for his trousers, highlighted with Army Painter Ultramarine. I used the same combo for his cap. Both Army Painter paints had the consistency of glue and dried with a glossy finish, which was just great. They've since been binned. His belt is Vallejo Cavalry Brown and the gold bits are Vallejo Filthy Brown. 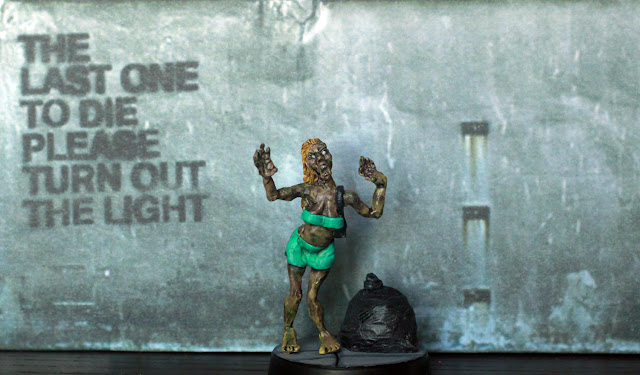 Tammy was heading to the nightclub when she was bitten. I did her in Vallejo Emerald Green washed with Army Painter Green Tone to bring out the shadows. The big problem with Tammy's sculpt is that her top is literally just a strip across her boobs; I'm not even sure if it's moulded all the way around her back. After wondering if I should use greenstuff to sort it out, I decided to just go with it. The trash bag is by TT Combat, part of a series called Back Alley Accessories. 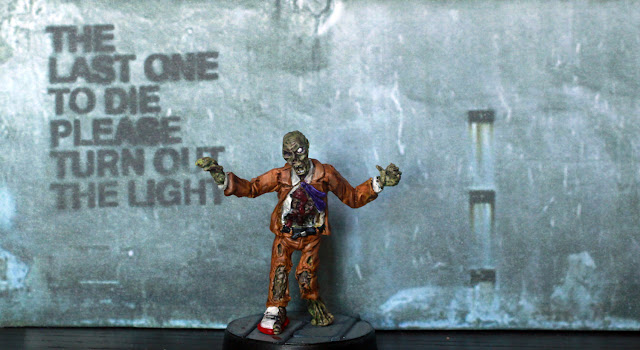 Poor old Curtis went out for a cig break and next thing he knows he's being ripped to shreds. He was painted while Alicia watched Die Hard (the best Xmas movie ever) in the background. Thanks to my inability to choose colours for clothes, I went for a tan shade but accidentally used Vallejo Orange Brown and stuck with it as I liked the look. He's highlighted with Vallejo Light Orange and his tie is Vallejo Blue Violet. He is somehow wearing one half of a shoe on his right foot, so I painted it as a trainer to give him a bit of character. His innards are a mush of Vallejo Red, Flat Red, Army Painter Purple Tone and the ever-reliable Citadel Blood For The Blood God.

Their skin is the usual Vallejo Game Colour Dead Flesh followed by washes of Army Painter Green and Purple tones and a a glaze of Dead Flesh. Their eyes are dotted with Army Painter Mummy Robes.

After finishing them I realise what a moron I was. The figures are actually really good and were fun to paint. They're all on 25mm urban bases by Aberrant Games, the same ones as my zombie strippers. I added blood splatter to the bases by thinning some Blood for the Blood God and applying it by dipping an old toothbrush in the paint and running a toothpick down the brush, but it doesn't really show in the photos.

The backdrop is an image I've used in another post. In case both of you are wondering, the difference in colour between the top photo and the others is because I'm crap at colour correcting in Photoshop.
Labels: aberrant games, army painter, basing, citadel, female, greenstuff, magical box of unloved lead, reaper, tt combat, vallejo, zombie