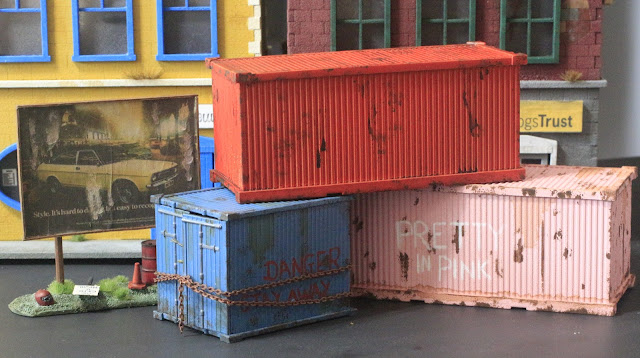 As well as painting figures, setting up Zombietown and fannying about with a lightbox, I also got around to some more scenery pieces: three shipping containers and another billboard. 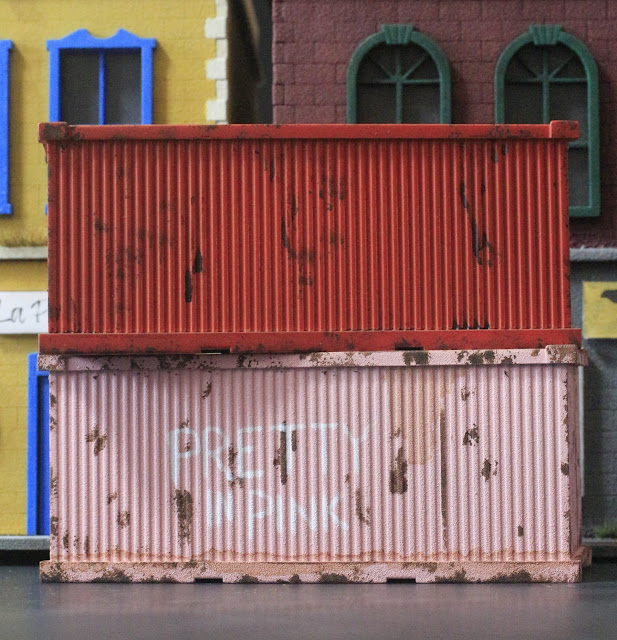 Kicking off with the shipping containers, getting these done means I now have four. Instead of using the liquid latex technique like last time, I wanted to speed the process up a bit, so I just sprayed them both with white primer then put the colours and rust effects on top.

I used Paprika for the orangey one and Sweet Pea for the pink one. Why pink? Why not? Although the paprika turned out a bit dark it still looks nicely industrial, and after daubing it with Dry Rust I added random splats (there's no other way to put it) of homemade black wash.

I don't know what happened to the Sweet Pea paint, but despite supposedly having a satin finish it dried with a very rough surface, as you can see in the photo. I guess I should have sacrificed a chicken to the Great Old One called Rust-O-Leum before shaking the can. Anyway, it too was weathered in the same way and when the Psychedelic Furs' classic song popped into my playlist while applying the rust, I was inspired to add some graffiti. 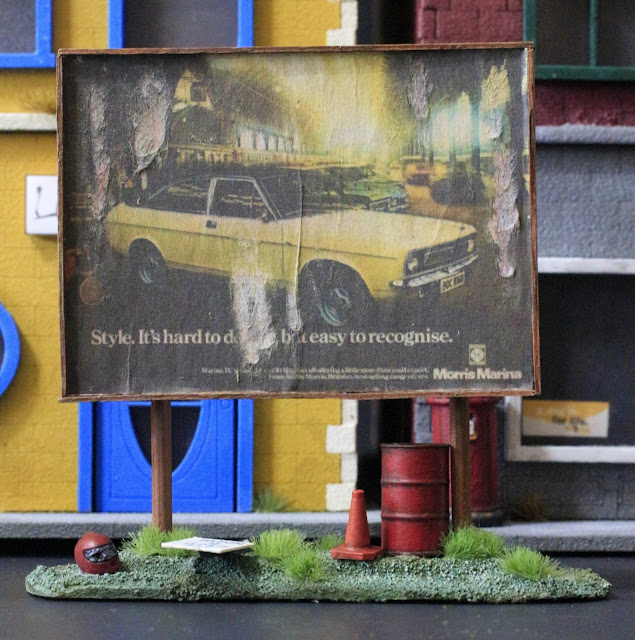 I made another billboard out of foamboard, stirrer sticks and dowels, just like my first one, and it went surprisingly well. After plastering it with black, nutmeg and khaki craft paints and some homemade washes, I glued on the poster and weathered it by brushing on water and scraping it with an Xacto blade, then slapping on some black and brown washes.

In case any of the older more mature Brits are wondering why the hell I'd use an advert for the 1973 Morris Marina Coupe, it's because my dad had one when I was a kid... 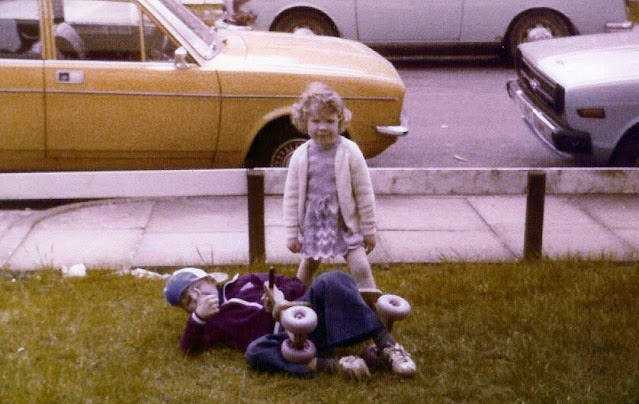 ...and to prove it, here's me and my sister pratting around with the Marina in the background. 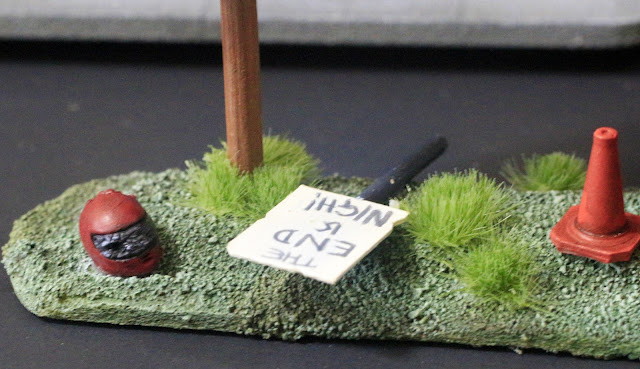 I rooted around in my bits box for some stuff to add to the base, and discovered this motorbike helmet with a smashed visor. I assume it came with some of the TTCombat bits I bought a couple of years ago. I like to think that there's a zombified head still inside it, waiting for someone to pick it up.

The sign is just a small oblong of plastic card glued to a length of plastic rod. I also glued on a traffic cone and an oil drum, as well as a bunch of tufts. 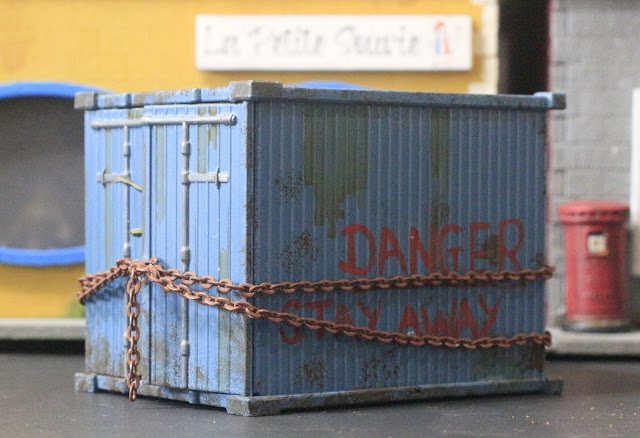 The smaller container was sprayed Nantucket Blue before being weathered like the others. As the doors on these are separate and can be opened, I had an idea for something a bit more interesting than just another blue cube, so I got some of the arms from a sprue of Zombie Vixens and glued them to the inside of the right door. 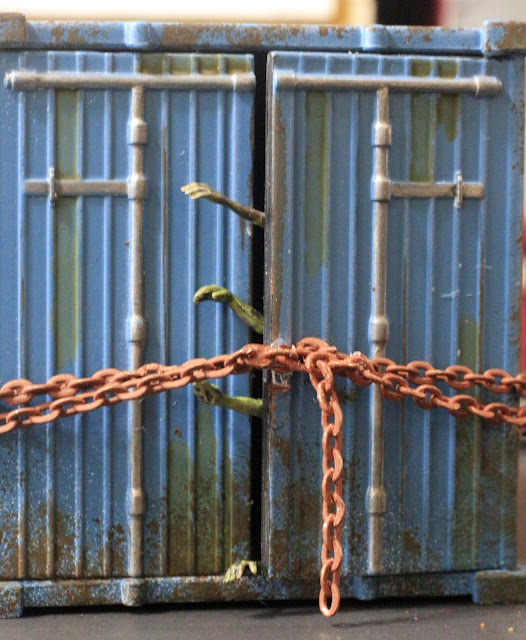 After painting the warnings on the sides, I used a cheap necklace chain sprayed with Rust Brown to wrap around the container. 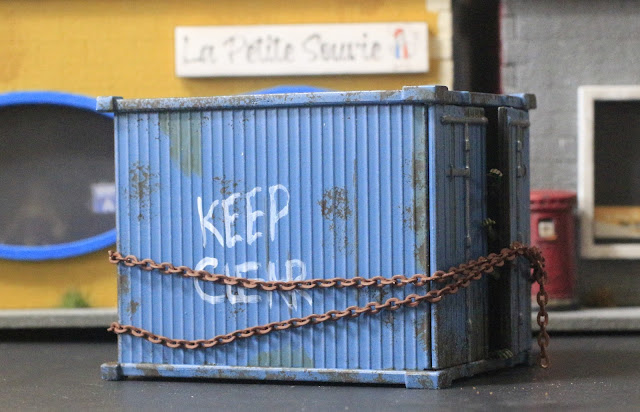 The chain was fiddly to put on because the spray paint had stuck the links together, but after a bit of mucking about I managed to attach it in several spots with gel superglue. It's not perfect but it looks good and turns a basic bit of scenery into something a bit more dangerous.
Labels: reaper, scenery, terrain, zombie