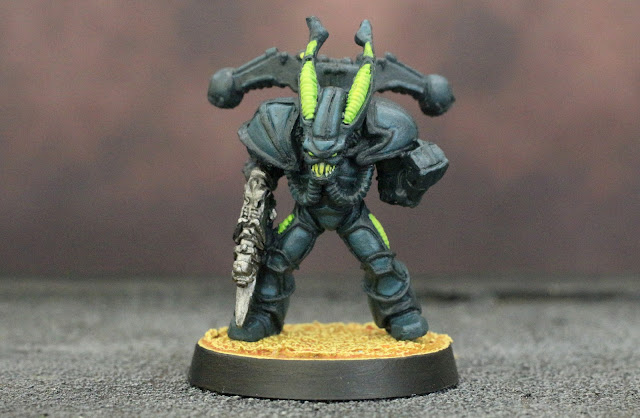 I went a bit Alpha Legion with this one.

After doing the last two in brighter colours, I thought I'd go back to darker shades for this chap. As I've already done one in black I decided to shift to a dark blue with a strong contrasting colour for the trim. 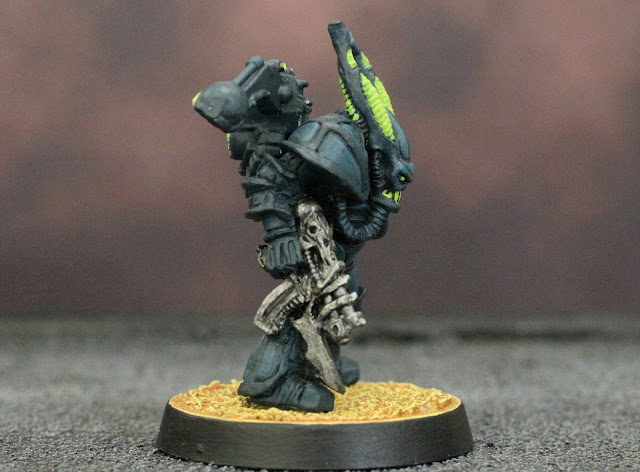 After priming him black, he got an all-over coat of Dark Sea Blue. I just painted the whole figure to make it easier and save a bit of time. I was originally going to just add white for the highlight shade, but thought that adding a bright green would help keep the ocean tones going, so I used Emerald Green. After mixing it I layered it on thinly, as I wanted to keep the armour dark. With that done I painted the ribbed bits on his legs and horns White, and went over them with Scorpy Green, then Yellow-Green, and then added White to brighten it more. I was basically going for the look people do on plasma guns, as I thought it be cool if it appeared that bits of his armour were glowing. After putting the final White highlight on I gave it a brush with homemade yellow wash. 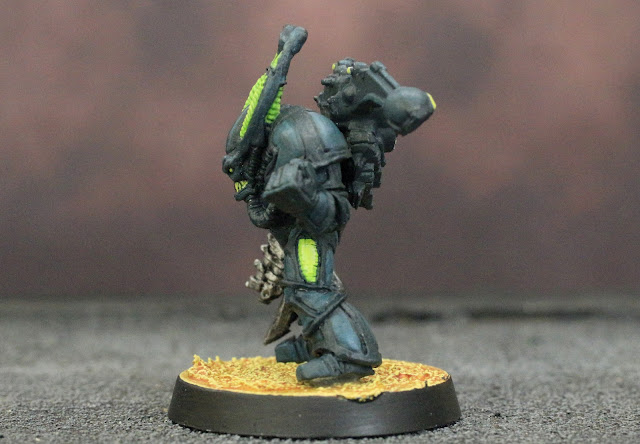 His backpack is a modern one as he didn't come with an original. It's just painted the same way as his armour, with the Chaos star and a few small areas picked out with Yellow Green. I did the same thing with his eyes and mouth grille.

To add a third colour, the boltgun is a basic job with Plate Metal washed with Nuln Oil.

The base is the usual Black Lava paste painted Ghost Grey, washed with Casandora Yellow and highlighted with Moon Dust.

So that's me out of Chaos Renegades... for now. They really are fantastic minis and way more imaginative then their modern counterparts. I've really enjoyed painting them and hopefully I can pick up some more in the future.