My first Girls With Guns post had a bit of a theme, as all the minis were from one company (Hasslefree) and were all from its futuristic soldier line. This time we have three minis from three different companies in three different genres. 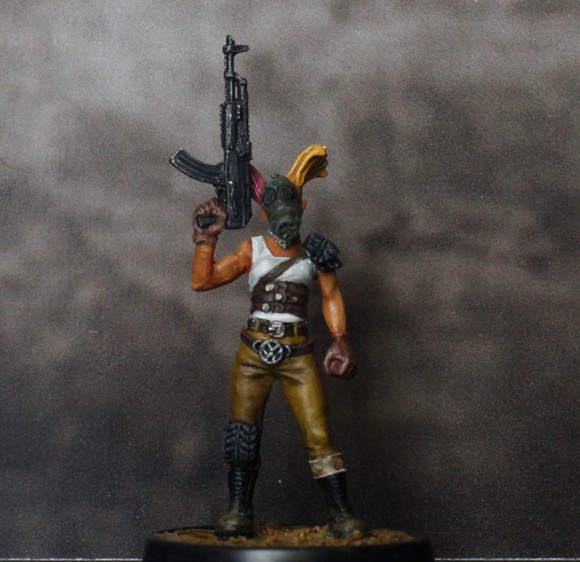 Foxtrot is by Hasslefree Miniatures. She comes with two bodies, two heads and two right arms with different weapons so it's possible to make her up as a crazy-haired gasmask-wearing nutter or Hasslefree's version of Furiosa from Mad Max: Fury Road. As you can see, I decided on the crazy-haired gasmask-wearing nutter who I've just realised is possibly/probably based on Tank Girl.

First off, fun and games gluing her right hand in place. I didn't dare attempt to drill/pin it as there was barely enough space for the drill bit and I had visions of wrecking the metal. I had to dab glue on to the 1.5mm worth of metal and hope for the best. As it was, her hand fell off twice during painting. Needless to say, this is one mini I don't pick up much. Also, the stock of her AK was bent on arrival and putting it back into position broke it off, which in my opinion actually makes it look cooler.

Her top is Vallejo Off-White and her many belts are a mix of Mahogany Brown and Burnt Umber, as are her gloves. Her trousers are WWII Japanese Army Uniform highlighted with English Uniform. The sections of tyre she's using as a shoulder and knee pad are Dark Grey darkened with Black Wash and then highlighted with Dark Grey again.

I used the same colour for her gas mask as I did for Rose's. I'm not saying Foxtrot is a grown-up Rose, but you never know. Her hair is Pink on one side and Sunblast Yellow on the other. 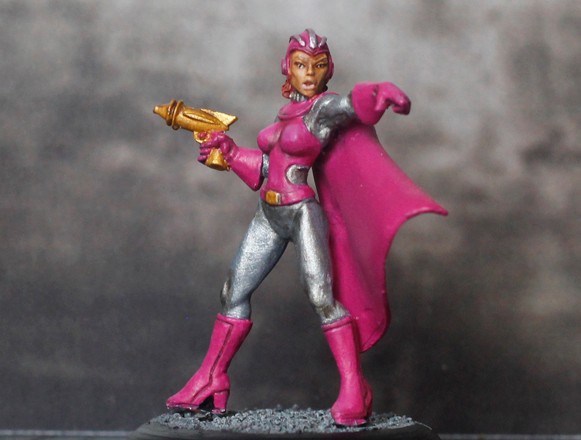 This is Hydra Miniatures' Valkeeri Leader A, which isn't the easiest of names to remember so I'll call her Brenda. Brenda is part of the Retro Raygun series of minis which encompass the pulp era of sci-fi, especially Flash Gordon. I bought her on a whim as part of a larger order from Noble Knight Games, which sells stuff by just about every manufacturer on the planet.

I knew I wanted to paint some of her outfit as if it was silvery material that all futuristic costumes would be made from. Those bits were done in Army Painter Shining Silver and shaded with Vallejo Black Wash and actually ended up looking like cloth, not plate metal. But I couldn't think of a contrast colour until my pot of Vallejo Warlord Purple sprang to mind. Why not have a futuristic female soldier wearing hot pink? It's suitably pulpy/campy. The pink is shaded with Army Painter Green Tone.

Brenda's gun and belt buckle are Vallejo Brass painted over Filthy Brown, which is a mustard yellow and is the best base for metallics like brass and gold. It's shaded with Army Painter Strong Tone. Her cape is a separate piece and was a bugger to glue on as I couldn't work out exactly where it went. After about four attempts I got it and then it was just a case of touching up the paint.

Her base is just some greenstuff sprinkled with sand and painted in varying shades of grey. I'm thinking of rebasing her at some point. 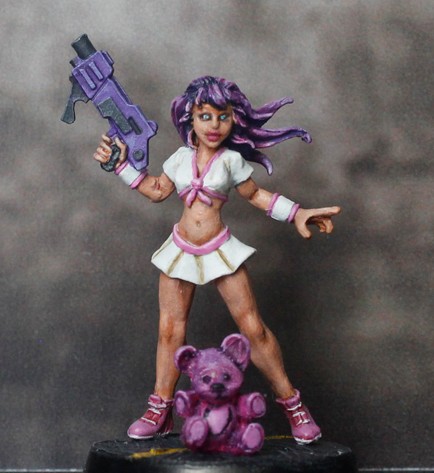 Sugar is one of Reaper's Anime Heroine girls. I have two others: Candy and Whitney. Like Brenda above, Sugar was an impulse buy as I thought she'd be fun to paint and would make a change from zombies, Space Marines and monsters.

Given I've seen one anime movie in my life (Akira, of course) I had to bullshit my way through Sugar's paintjob. Her costume is mainly Vallejo Off-White shaded with Army Painter Soft Tone, highlighted with White and trimmed with Vallejo Pink. Her hair is Vallejo Wizard's Robe (deep purple) layered over with Pink. You can tell I didn't really have the hang of layering at this point.

Her base is Liquitex Modelling Paste painted Vallejo Dark Grey and shaded with Black Wash. The yellow stripe is Army Painter Fire Lizard. I think Sugar's base is the first I did like this and I've done the majority of my post-apoc/zombie hunter bases the same way since. The teddy bear is from TTCombat.

I remember being ridiculously happy at how well Sugar came out given that painting large areas of skin tone scare me even more than painting large areas of white. But looking at her nine months later? Her costume came out looking fine and I'm still happy with it, especially the pink trim. Her hair is OK but you can tell this was one of my first attempts at layering paint. On the other hand, her skin looks like she's got smallpox thanks to the awful drybrushing job I did on it. It's just terrible. And her eyes, which I thought matched the anime theme, are creepy and make her look like a blind sex doll. She might be heading for a Simple Green bath at some point.
Labels: anime, army painter, basing, female, hasslefree, hydra miniatures, reaper, scifi, tt combat, vallejo