Zombie hunters part 2: This time they have guns 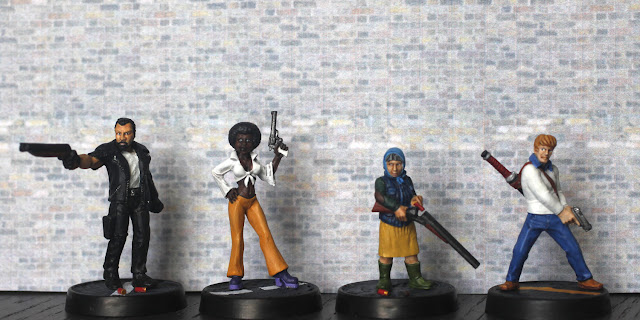 I've completed four more post-apocalyptic zombie hunters. From left we have Rex, Ebony, Madge and Barney. Unlike the previous team, these guys are armed with more than just baseball bats and chainsaws. Once again, three of them are familiar. 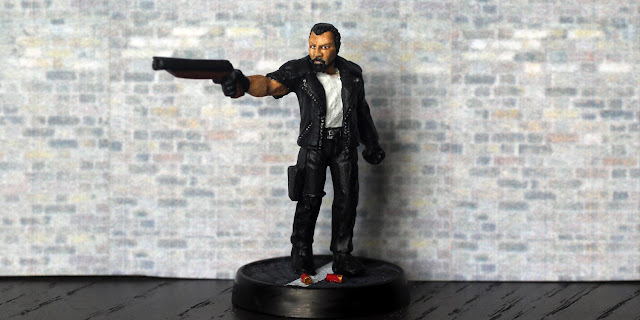 Rex is a tall, slightly menacing guy who speaks with an Australian accent, wields a sawn-off shotgun and has an annoying habit of saying "I'll be back" every time he leaves a room. The other three members of his group are convinced Rex never sleeps but aren't sure if it's because:

Reaper Miniatures' Rex is their Road Warrior, but why does he have a beard? Answers on a postcard, please. He was screamingly easy to paint: Vallejo Black all over with Off-White for his t-shirt and a touch of Army Painter Gun Metal for the zips on his jacket. Even his skin tone went well and his eyes were perfect first time. If only they could all be like that.

The shell casings on the base are short lengths of 1mm plastic rod painted Vallejo Flat Red and Brass. 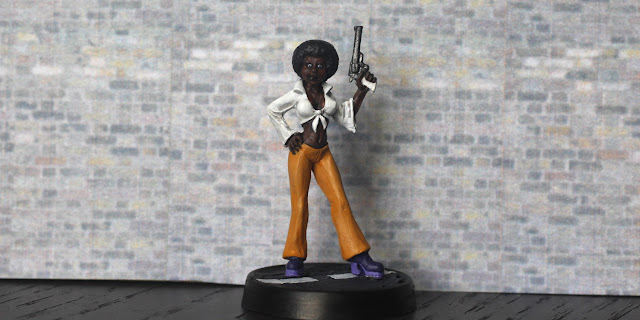 Ebony was at a fancy dress party with her twin sister Cleo when the zeds hit the fan. She's managed to get hold of a pistol from a dead cop but is wondering how people ever got around in eight-inch platform heels and really misses her Nikes. Ebony has the look of a woman who just cannot believe this shit, but behind the 'tude she's wondering if she'll see her sis again.

Me and Alicia had a whole conversation about whether this Reaper mini is racist. Alicia thinks it is; I think it's just a 70s stereotype in the same way that Bobby Jo is a stereotypical redneck or Lord Karghoul is a stereotypical D&D bad guy. Anyway, that aside, I had to learn how to paint black skin, something I've never done before. After some searching I found a guide to painting just about every skin tone in the world, so consider it bookmarked. Ebony's skin is Vallejo Chocolate Brown shaded with Burnt Umber wash and highlighted with Chocolate Brown with progressively more Light Brown added. To my amazement it worked, and frankly it worked better than most of the white skin I've painted.

To get the 70s look I opted for mustard yellow flares courtesy of Vallejo Filthy Brown and Army Painter Fire Lizard. Her top is Vallejo Off-White shaded with Grey Wash and he shoes are Vallejo Wizard's Robe and Blue Violet. 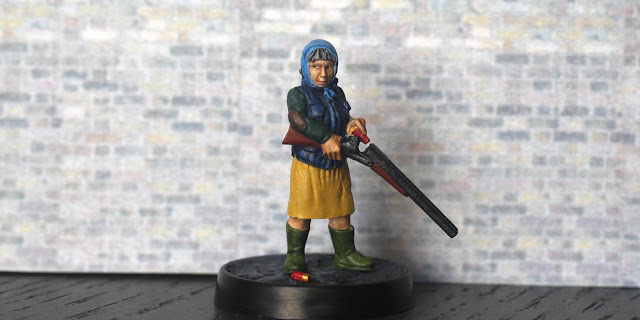 Madge is an older, refined English lady who's more at home tootling around her garden in a Range Rover or wandering the many rooms of her house than she is dealing double-barreled death to hordes of her former countrymen. Nevertheless she's deadly with her antique shotgun, regales her group with tales of what she and the 15th Earl of Berkshire got up to at the ball, and is giving Ebony shooting lessons.

I'd long ignored Madge on Hasslefree's site until I realised that Kev White has sculpted Her Majesty Queen Elizabeth II as a zombie killer. I had to google a couple of photos of Her Maj (get it?) as I have no idea what she wears on an average day or when she's not trolling the British Government. I ended up going with Vallejo Andrea Blue for her headscarf, Dark Prussian Blue for her bodywarmer, Black Green for her jacket and Yellow Ochre for her skirt. The wellies are Goblin Green with a couple of coats of Army Painter Green Tone to darken them.

Her shotgun was given a once-over with a mix of Vallejo Black Wash and Army Painter Gunmetal to give it a metallic look, and the wooden bits are Cavalry Brown. I painted her eyes to make it look like she's calmly reloading while keeping an eye on an approaching zombie. A couple of leftover shotgun cases finished it off. 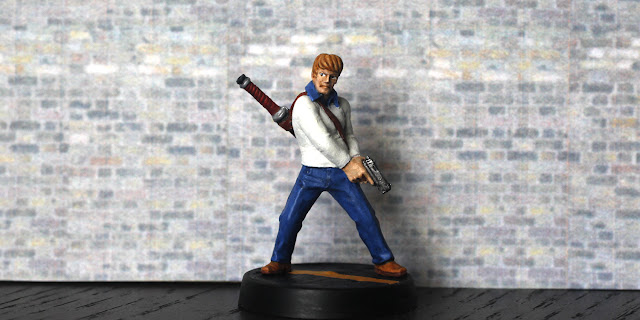 Barney was separated from his three friends when shit got real and teamed up with Ebony, Rex and Madge in the confusion. Waves of the shambling dead have broken on his square jaw, and if his all-American looks don't work then his pistol and katana will do the job. Madge is continually amazed at how Barney gets the bloodstains out of his white jumper.

Barney is another member of Hasslefree's post-apocalyptic not-Scooby Doo gang, of which I now have three (the other two are Louise and Felicity). Despite having a large area of white, Barney was surprisingly easy to paint. I used Vallejo Flat Blue for his trousers and collar, which makes you wonder: 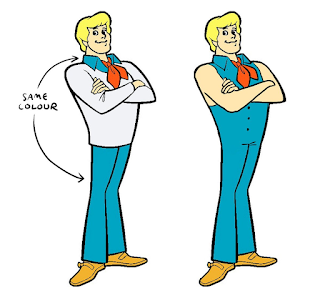 His top is Off-White, and I have to admit I was disappointed that he doesn't have the little red cravat/scarf thing. Some Light Brown for his shoes and Golden Brown for his hair and he was done. I debated doing his pistol in black but went for Army Painter Gun Metal because I was in that kind of mood. I googled katanas and tried to do a red handle on his and I like to think I almost got it. Its case and strap are Cavalry Brown.

As per usual, all the bases are just Liquitex Modelling Paste painted black and highlighted with dark grey. I forgot to add the road stripe to Madge's. Oops.