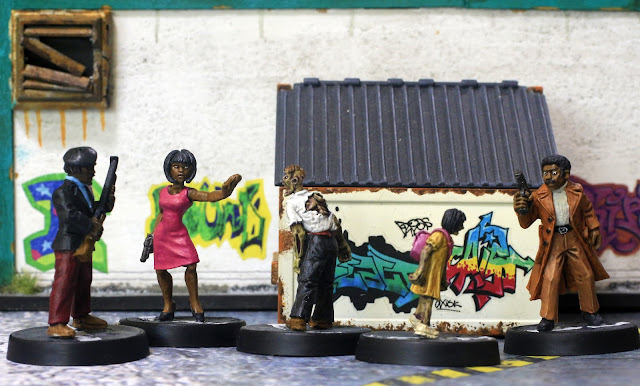 Well it's been five weeks and I'm assuming my Hasslefree survivors have succumbed to a zombie apocalypse in the depths of Caerphilly. Luckily these groovy mofos turned up a couple of days ago and gave me another chance to do some stuff for Dave's Apocalypse Me challenge. Here they are in the usual crappily-lit photos. 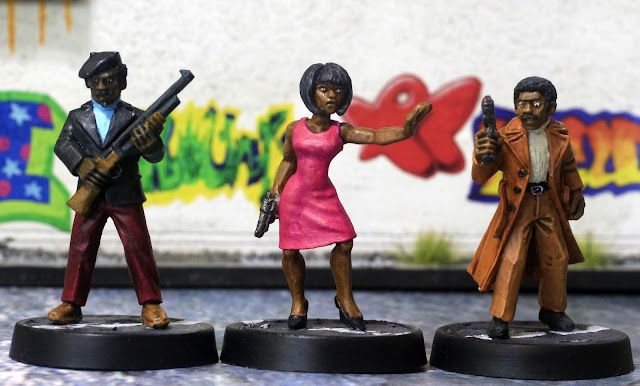 I got these guys from Brigade Games. They're actually made by Copplestone Castings and are called the Soul Section, part of Copplestone's Kiss Kiss Bang Bang range of 1960s and 70s spies. Their clothing makes them perfect to be more attendees of the fancy dress party which also features Cleo, Ebony, Destiny and Horace. I named them Darius, Pam and Calvin. 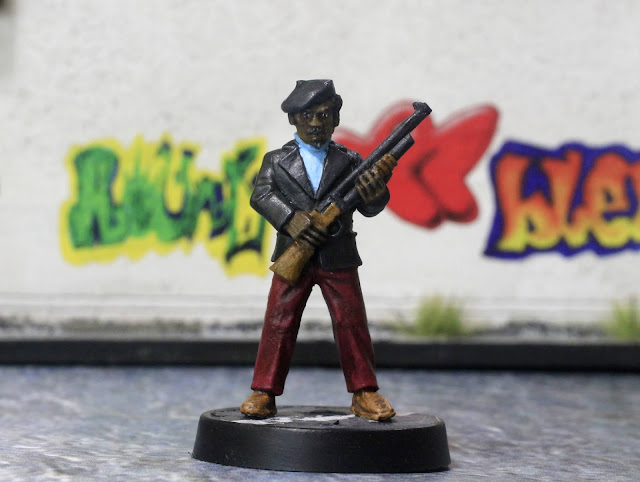 Darius was the first person at the party to see that something odd was going on when a couple of guys took a bite out of the DJ. After yelling a warning to Calvin, he fought his way outside, got a shotgun from the boot of a police car and opened fire on the shambling dead.

I went for a darker 70s palette for Darius, with a leather jacket and beret painted Black Grey and Black Red trousers highlighted with Dark Red. A bit of Sky Blue for his turtleneck sweater and some Light Brown on his shoes and he was done. 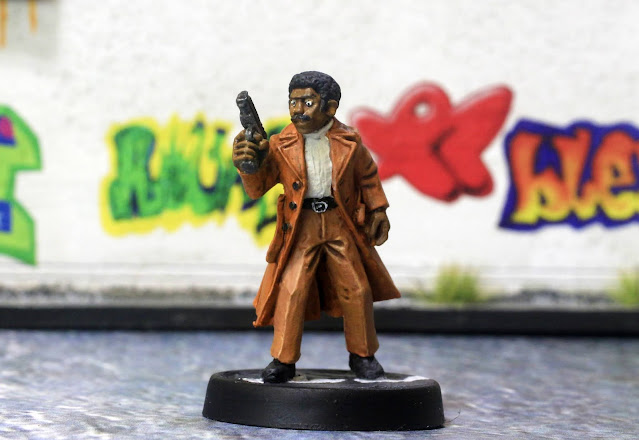 After hearing Darius' shout, Calvin grabbed Pam and headed for the front door. Finding it blocked by zedheads and body parts, he battled through the crowd of panicked partygoers and exited out the back. After finding a pistol he managed to shoot his way out of the garden and reunite with Darius.

First off: PLEASE IGNORE HIS LEFT EYE. I've since fixed it. Anyway, I really like 70s orangey-browns and Calvin's cool jacket screamed out for such a shade. I stuck to a lighter scheme with the rest of his clothes, painting his trousers Light Brown and his turtleneck Ivory. I cannot believe I arsed up his eye that badly. 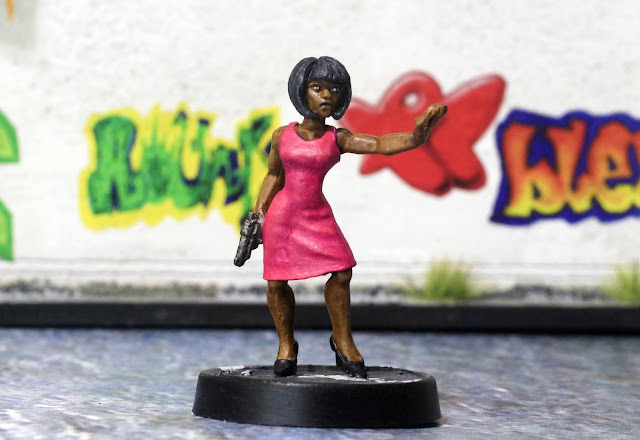 Pam was grooving to the music when she was suddenly dragged out of the mayhem by Calvin. Bewildered by the screams and panic, she grabbed a pistol from a dead security guard and started shooting. Since leaving the party she's become a one-woman zombie killer.

Pam was named after the absolute badass that is Pam Grier. She looks a tad more 1960s than 1970s but I'm not letting that get in the way. Her dress proved a sticking point when deciding on a colour, as I've already used 70s classics like lime green, muted pink, orange and mustard yellow on other partygoers. I briefly entertained doing some kind of pattern or stripes, but then remembered it's me doing the painting so I stuck with hot pink in the form of Warlord Purple highlighted with Sunset Red.

As I said there's no sign of the Hasslefree minis, but I just got an email telling me my last order of Brigade Games zombies will be delivered later today so expect some more collapsing cadavers soon!