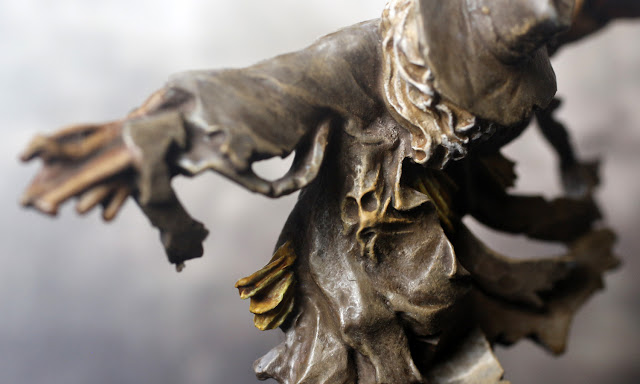 You're driving through the English countryside in the spring sunshine. A figure in a field catches your eye and you pull over for a better look. It's a scarecrow stuck in the brown earth, the sun glinting off a rusty sickle that's been jammed in the bundle of sticks that forms its left hand.

Bloody creepy, you think, and continue on your way.

A mile down the road you can see a small village. It's been a long drive and when you see the local pub you decide to stop for a pint. The locals seem a quiet bunch, and they pay you no attention as you order your drink.

Curiosity gets the better of you.

"Excuse me," you say to the barman. "That scarecrow in the field just up the road. It's pretty... interesting."

"'Im? That's Mister Mangel," comes the reply. "'E's just a scarecrow. Someone named 'im a few years back and it stuck."

You want to ask about the sickle, but you don't. After all, it's just a scarecrow.

You thank the barman, drink your beer and head off on your way home. 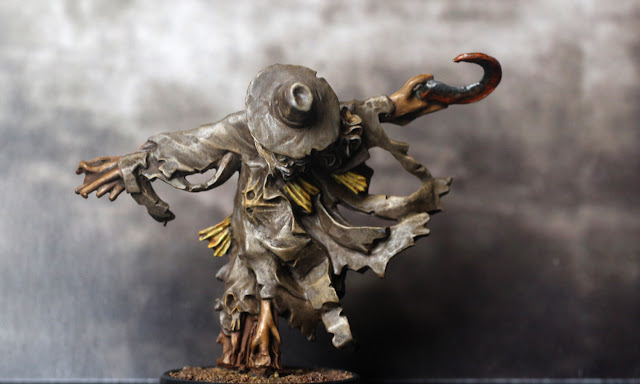 A few months later you're passing through the village again. Autumn leaves cover the roads but Mister Mangel is still in his field and doesn't look any worse for wear despite the passing of the seasons. The pub, however, is gone; just a patch of scrubby looking ground marks its spot.

You pull over and get out of the car. This is definitely where the pub used to be. Across the road is a ruddy-faced local chap leaning on a fence. "Excuse me, mate," you call. "What happened to the pub?"

You cross the road so you don't have to shout.

"Yeah, the pub. I stopped here a couple of months back for a pint. What happened to it?" 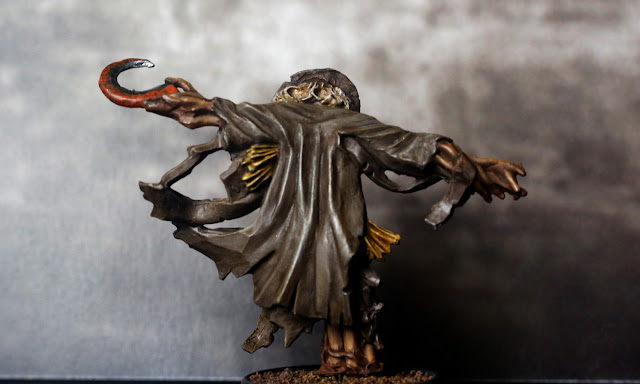 The local is quiet for a moment.

Before you can express surprise, his face turns up to the clear autumn sky. Tears of joy are running down his face.

He whispers, "The Cleansing, we calls it."

Spooked out, you mumble some thanks and turn back to your car. You freeze in your tracks.

Mister Mangel is standing in front of you. The sun glints off his sickle.

Mister Mangel is by Crooked Dice, and it's one of a few of their figures that I've painted. There's a definite Wicker Man vibe about him. I also liked the way it resembles Fields of the Nephilim singer and noted creosote-gargler* Carl McCoy: 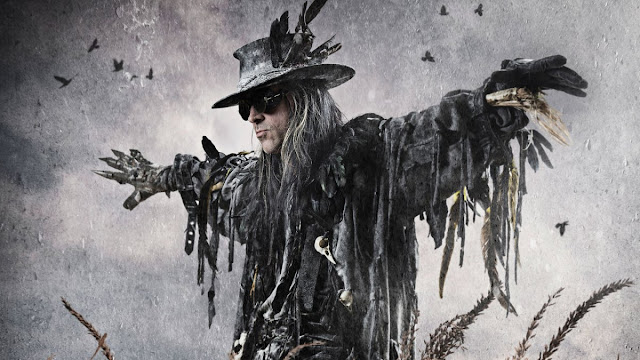 The only downside is the paint job. I have to admit, looking at Mister Mangel now, some eight or so months after painting him, that he isn't too good. There's not enough depth to the colours and the whole thing just blurs into one mass of brown. I'm not even sure which browns I used to paint him, but after doing Benedikt's cloak I know I could do a better job these days.

It is an excellent sculpt and might be heading for a bath of Simple Green in the near future. Just as soon as I get these bloody Chaos warriors and Daemonettes out of the way.

*Nothing else can explain McCoy's singing voice. Don't get me wrong, I love the Neff, but he's either gargling creosote or swigging battery acid before he goes onstage.
Labels: creepy, crooked dice, horror, vallejo