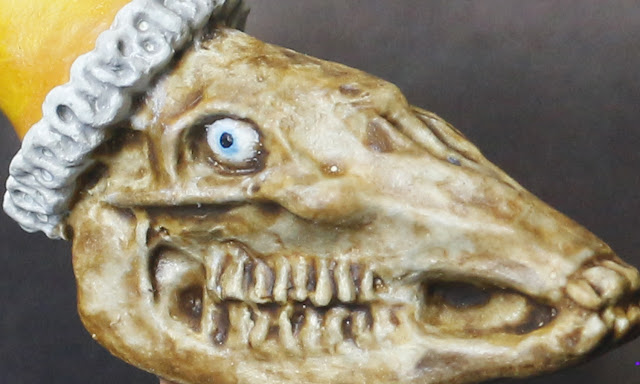 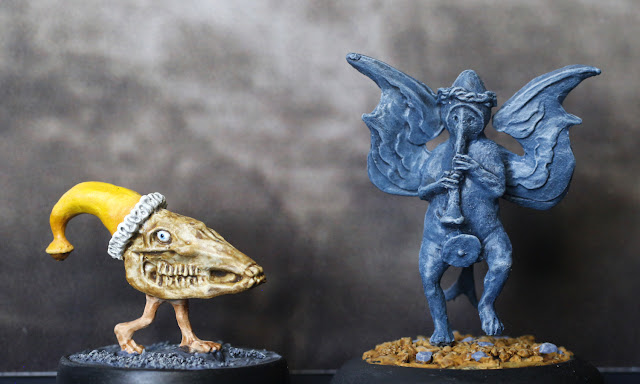 In my previous post on Ana's miniatures I said I'd bought four and painted three; I was wrong, I'd bought five. These are the final two: the Skull Familiar and Blue Imp. 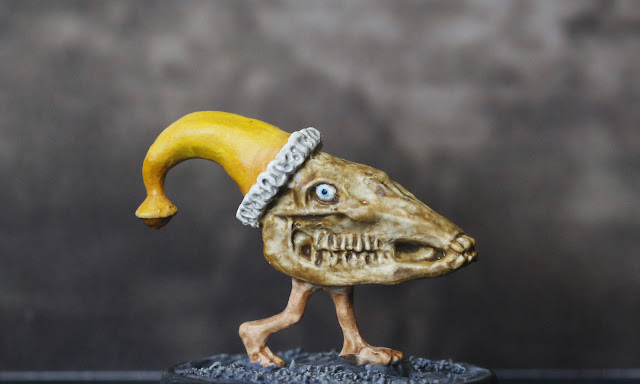 I... I... just don't know. It's a horse skull with tiny human legs and a cheerful Santa hat. That's all I can say. I have no idea what goes through Ana Polanscak's mind when she comes up with these figures, but it works.

Much like the Blood Fiend, the Familiar's skull was painted Vallejo Off-White and daubed with Sepia and Umber washes to get the bone effect. The tiny legs are Basic Flesh. I thought about doing some kind of reptilian eye, but then realised that a normal eye is much scarier.

I wasn't too sure how to do the hat. I didn't fancy red as it would be too Santa-like so I went for a bright yellow, achieved with Vallejo Sunny Skin and Yellow Glaze. I figured that as this mini is so insane it doesn't really matter what colour it is. The little bell on the end is Brass. Yes, this ambulatory horse skull's cheerful yellow hat as a bell on it. Somewhat unsurprisingly, this mini has joined Alicia's list of figures she won't even look at. 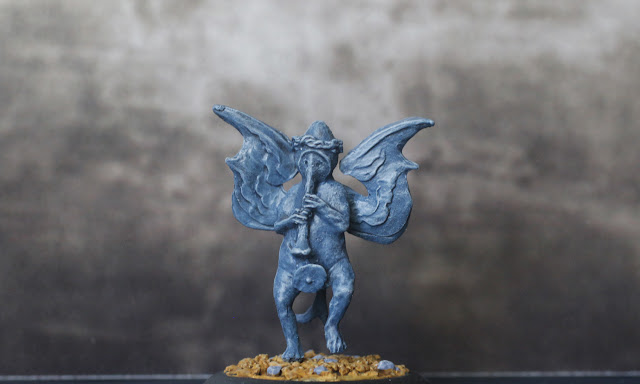 I'm at a loss here — is it playing its own nose?

The Blue Imp pretty much determined its own colour. I went with Vallejo Grey-Blue all over, washed with Army Painter Blue Tone and highlighted with more Grey-Blue. As you can probably guess, it was an easy paintjob and didn't take too long.

The only issue was gluing it to its base. As the imp is standing on one leg, and as its foot has an area of about two square millimteres, it's held on with a minute amount of superglue and has fallen off its base twice in the last week. Sigh.
Labels: ana polanscak, basing, creepy, fantasy, harwood hobbies, horror, vallejo