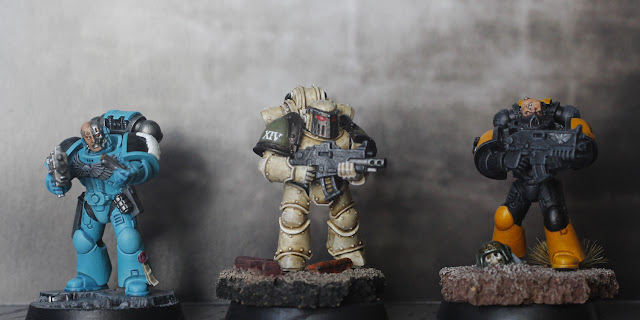 Here's three more of the Emperor's finest: from left, Marines of the Void Dragons, Death Guard and Tiger Claws. 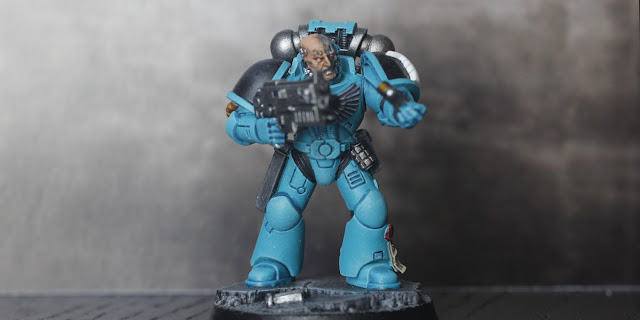 I'm not exactly sure where I go the idea for the Void Dragons. I have a feeling I got a couple of Chapter colour schemes and names mixed up and ended up inadvertently creating my own. This is another model from the Space Marine Heroes range, as is my Mortifactor. I swapped out his head for one I picked up on eBay. I do like the way he's about to slam a fresh magazine into his boltgun. 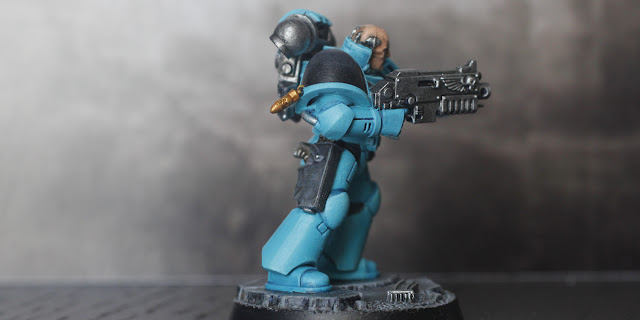 He's painted with Vallejo Blue-Green and shaded with Amy Painter Blue Tone. Looking at him now, there's not really enough highlighting on the armour. I should have taken it up a couple more stages. But the colour is great, and he stands out against the usual red/blue/black.

I have no idea why there's a bolter shell hanging off his shoulder pad pauldron.  I can only assume that it's some bit of background lore of which I know nothing, or just another fiddly detail that GW decided to add to the Marines, along with skulls and bloody purity seals. 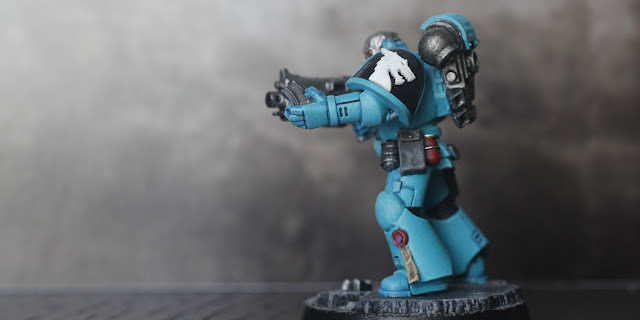 Oh look, he also has a bloody purity seal. I think the Empire is now giving them out just for showing up. The insignia is another 3D printed one from Shapeways. The eagle-eyed among you might spot that it's for the Black Dragons chapter, which is probably why I got a bit confused over the name. 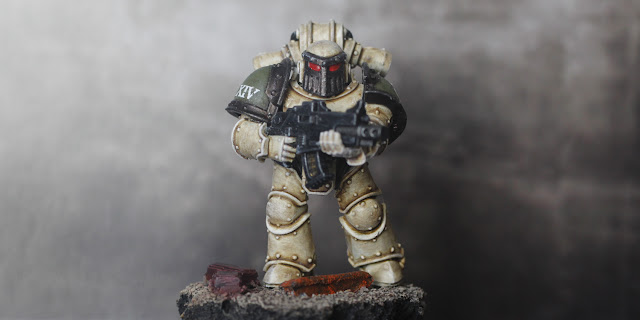 The Death Guard were one of the original 20 18 Space Marine Legions, tasked with reclaiming humanity's galactic empire. Then things went a bit traitory and the XIV Legion's Marines found themselves turning into zombies encased in rotting yet near-indestructible armour. This chap is wearing Mk.III armour and is painted in the Guard's original livery of white and green-grey. Well, "white" is subjective. According to Games Workshop's own novels, Death Guard armour could be white, pale grey, off-white, marble or iron. 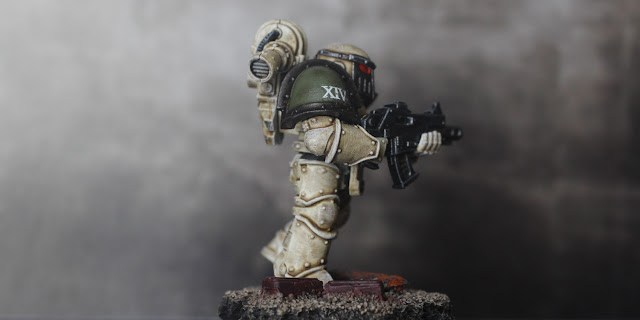 I did probably the best job of painting pristine white I've ever managed on this mini. With this being the Death Guard, things don't stay pristine for long so he was covered in Army Painter Strong Tone to the extent that it would have been easier to just drop him in a pot of cold coffee. The XIV on his shoulder pad is a decal. I think I used Army Painter Army Green for the pads, washed with Green Tone. 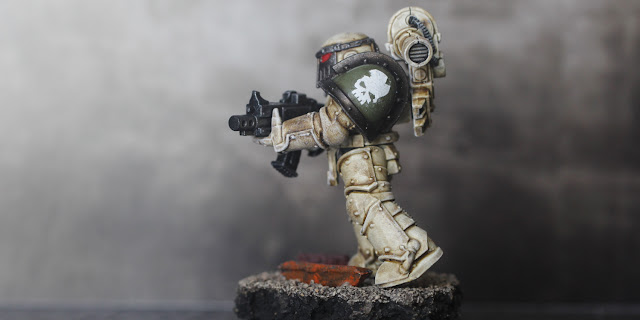 I used another decal for the skull emblem and just scraped bits off to add to the worn look of the armour. I kept the highlighting to a minimum as I wanted all of his armour to look worn and dirty, which is totally Death Guard; they were sent into the literally dirtiest environments and kept their armour filthy as a sign of their toughness.

He's based on — you guessed it — cork, with some rust-painted bits of plastic to add detail. 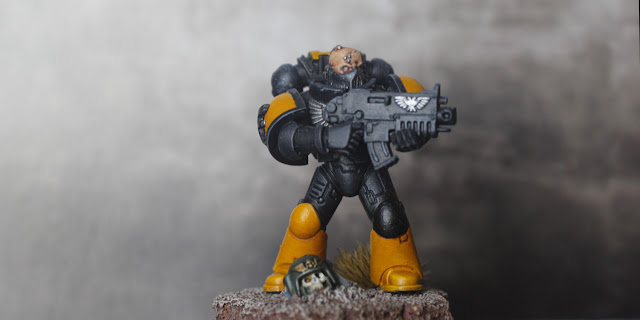 The Tiger Claws are one of those Chapters where you think, "Who?" But they've been around since the early 90s, albeit in awful striped armour: 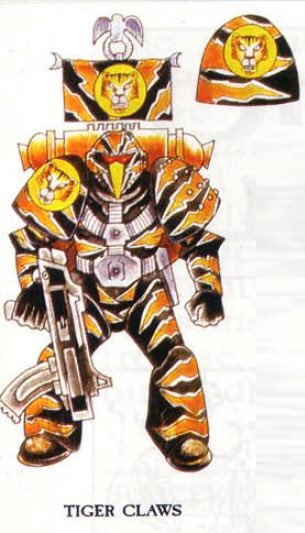 At some point they were given a new black and yellow look, which is pretty eye-catching and to be honest is one of the best Marine liveries. Alas, the Tiger Claws are now renegades, having spurned the Emperor's light to frolic in the Eye of Terror. 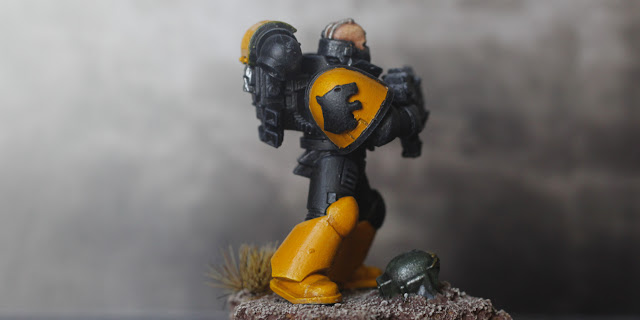 Yellow can be an absolute sod to paint, but luckily I found a tutorial showing an easy way to do it: a basecoat of Vallejo Filthy Brown followed by glazes of Transparent Yellow. The more layers of glaze, the brighter the yellow, and as I wanted a slightly darker tint I just did two. I used a 3D printed emblem for the tiger head, which I've just realised is on the wrong shoulder pad. 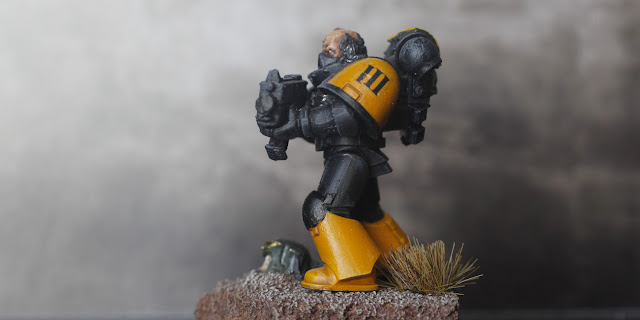 The helmeted skull on the COOOORRRRK! base is another bit from Ebay, and the Roman numerals are (obviously) a decal. The black armour was given a light drybrushing of Army Painter Uniform Grey to bring out some of the details. This is one of my fave Marines as the colour scheme is so awesome.