These are mi-go. The two on the outside are plastic Reaper Bones figures and the centre one is a metal mini by Crooked Dice Miniatures.

Mi-go are alien creatures from HP Lovecraft's short(ish) story "The Whisperer In Darkness". It's his only story set in Vermont (hence the woodland pic as a backdrop) and uses the historical 1927 flood as its kickoff point. In a nutshell, a professor in Massachusetts and a recluse in the Green Mountain State enter into correspondence about strange creatures washed up in the floodwaters. The correspondence takes a weird turn when the recluse claims to be under nightly attack by the creatures, gets even odder when he says he has recordings and photos of them, and things really go to shit when the professor visits Vermont.

It's a good story with an excellent atmosphere that builds to an overwhelming sense of cosmic horror, but this is one Lovecraft story that really gets dragged down in verbosity. Don't get me wrong, Lovecraft was a great writer (except for, of course, his screaming racism), but dear God he needed an editor.

From the story, mi-gos are:


...pinkish things about five feet long; with crustaceous bodies bearing vast pairs of dorsal fins or membraneous wings and several sets of articulated limbs, and with a sort of convoluted ellipsoid, covered with multitudes of very short antennae, where a head would ordinarily be. 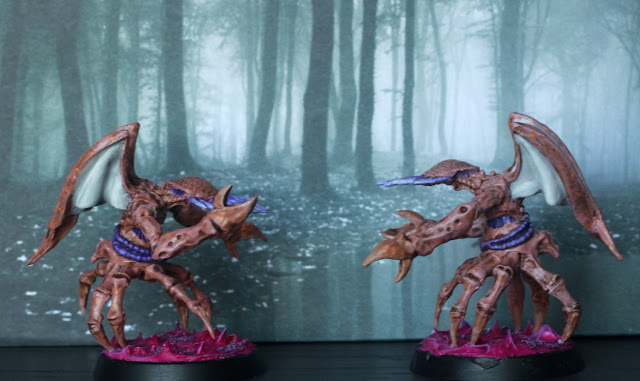 Kevin Williams, who sculpted Reaper's mi-go, seems to have taken the "crustaceous" part of the description literally, giving them crab legs and claws (mmmm seafood). The pinkish look is thanks to Vallejo Brown Rose, which was liberally plastered over both models, and the shading is from two or three washes of Army Painter Strong Tone. Also, if you're paying attention, you'll notice I swapped out the pic of the Vermont woods for one that looks a lot less like somewhere you'd want to walk your dogs. 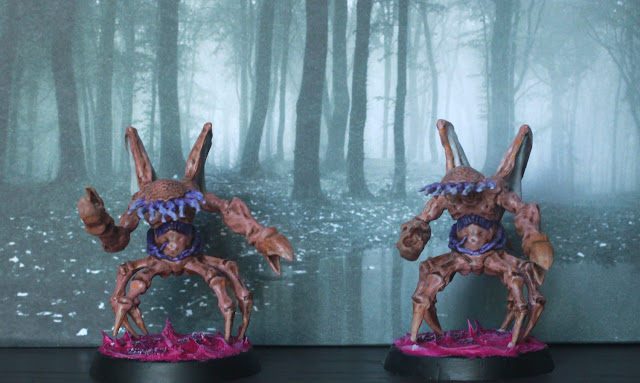 The coils of organs(?) around their waists and their antennae are done in Vallejo Blue Violet washed with Army Painter Purple Tone and highlighted with Blue Violet and Vallejo Off-White. I tried layering the highlights on the antennae and the wing membranes, which are Army Painter Ash Grey and Vallejo Off-White. The orange spots on their shells are dabs of Vallejo Light Orange. This was the first time I'd painted two minis at the same time since my last Ultramarines in 1994.

When it came to their bases I wanted to do something that would look like an alien planet, as Lovecraft's mi-gos are from Yuggoth, his stand in for Pluto. I used Liquifex Modelling Paste for the surface. It's a thick paste that is a hell of a lot easier to work with than greenstuff. I used a bit of wooden coffee stirrer to lift some of it into the spikes. After leaving them overnight to dry, I glued on some sand to provide texture. The paste was painted Vallejo Warlord Purple (magenta/hot pink) and the sand Vallejo Wizard's Robe (a deep purple). 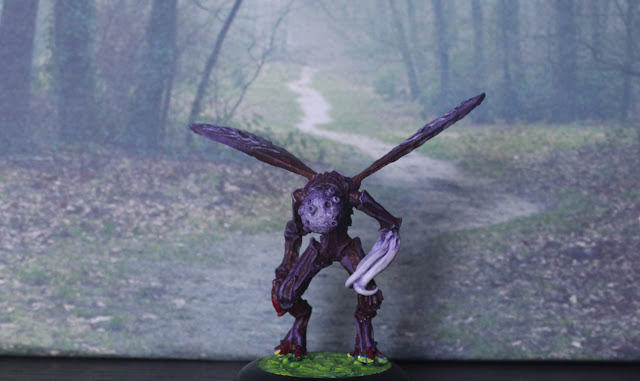 Crooked Dice's mi-go are called  flying fungi, which fits with the story: despite looking crustacean the mi-go are closer to fungi in terms of biology. As I didn't want to replicate the look of the Reaper minis I decided to rip off the paint scheme Crooked Dice used but with different colours. As I cast my eye over my paint collection I spotted two colours that I rarely used: Army Painter Chaotic Red and Orc Blood. Both paints had separated so badly I had to turn them upside down and leave them for a couple of days, and even then it took about 5 minutes of shaking each one to get them to a useable mix.

Anyway, once coated in Chaotic Red and washed in Army Painter Red and Purple Tones, the mini was highlighted with Orc Blood on its shell and wings. The tentacle is Army Painter Mummy Robes washed with Purple Tone and layered with Vallejo Off-White. I used the same technique on its head and wings. Its barely-visible crab claw has a few layers of Vallejo Black Red, as do the claws on its feet.

The wings are separate and were a huge amount of fun to glue in place. I broke the left one off twice when taking the pics for this post. And I've just realised that the background image is back to the original, so for all we know this mi-go is waiting for his pup to bring the stick back.

The base is again supposed to be Yuggoth. It's made with Liquitex Modelling Paste, only this time with a small amount of water added to smooth it down. It's painted Vallejo Yellow Green and washed with Army Painter Purple and Blue tones. As you can probably see, the figure's feet don't sit quite properly on the base but instead let's direct our gaze to the glory of the Vermont woods.
Labels: army painter, basing, creepy, crooked dice, horror, lovecraft, miniatures, monster, reaper, vallejo