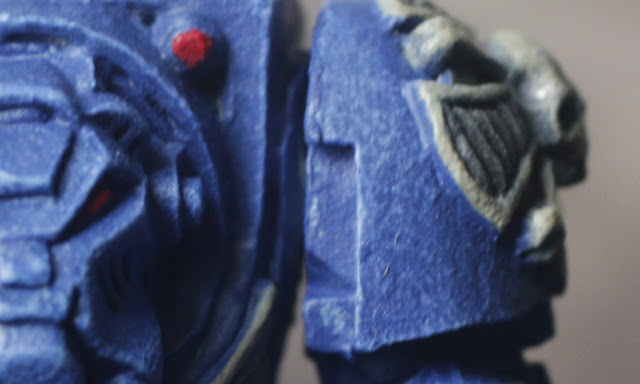 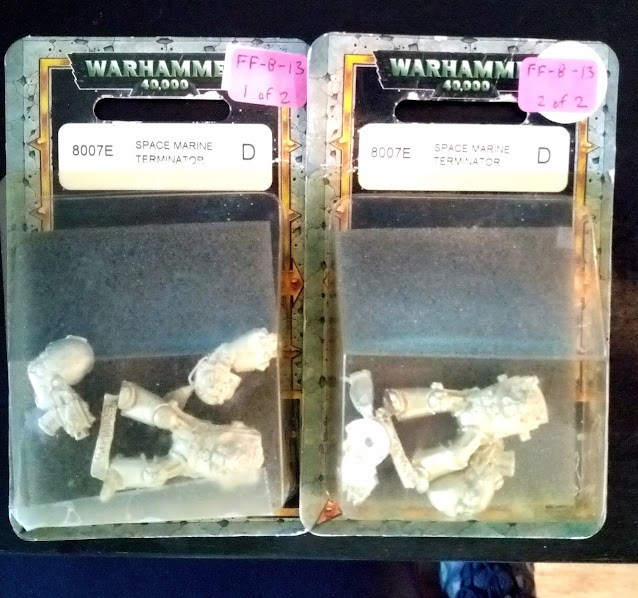 I almost didn't open these. As when I painted my Chaos Champion, my confidence that I could do these classic Jes Goodwin minis justice was at a low. It's not that the original 1989 Terminators are rare, it's more that I went straight into overthinking how to paint them. I'm sure I didn't do that back in the day; back then, I just opened the packet and started slapping on the Citadel Marine Dark Blue and Ultramarine.

These chaps were an impulse buy off Ebay. They were $12 each, a tad more than their original price, which I think was around £1.50 for two. I figured that as the new plastic Termies work out at $10 a pop, a couple of extra dollars wasn't too much for metal figures and the nostalgia value (not forgetting the magical FREE SHIPPING!) 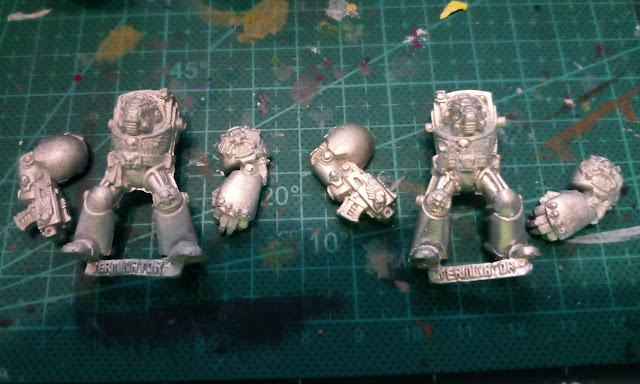 Here they are freed from their packaging for the first time in probably three decades. These are basic Terminators, armed with storm bolters and power fists, if by "basic" you mean "ten-foot-tall walking tanks". 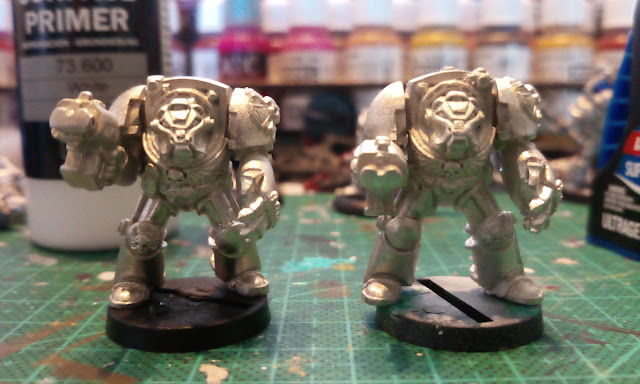 They took a lot of cleanup. I have read that, back in the days when they just did metal figures, Games Workshop was criticised by fans for not renewing its moulds, leading to tons of flash, vents and mould lines. Anyway, all the bits were carved or filed off, then they got a damn good scrubbing and were glued together.

After much deliberation, I decided to go full 1990 and paint the first one as an Ultramarine. I had two squads of Termies in my Ultramarine army so it seemed the obvious choice. I know the smurfs are either revered or reviled these days, but 30 years ago they were just another Chapter.

As my old Citadel paints are now in the Great Landfill in the Sky, I had to work out which of my Vallejo paints to use. I used this conversion chart, which led me to realise I don't have the equivalent colours. Bugger. But why am I painting an older model in the modern colours? I'd rather paint him up in original livery like my Ultramarine medic, which was done with Army Painter Crystal and Electric blues. Ah. I binned my AP blues after replacing them with Vallejo paints, which are frankly way better. Luckily I have their equivalents — Magic and Electric blue. I also found a blog post which describes painting a modern Ultramarine to look old school. So, here we go... 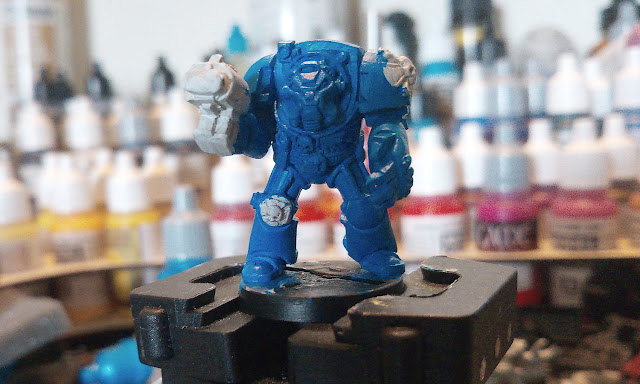 OK, that really didn't work. The Magic Blue is way too bright. I also completely forgot that it's a lot easier to paint a Terminator in bits then glue it together. But soft, what light through yonder window breaks? 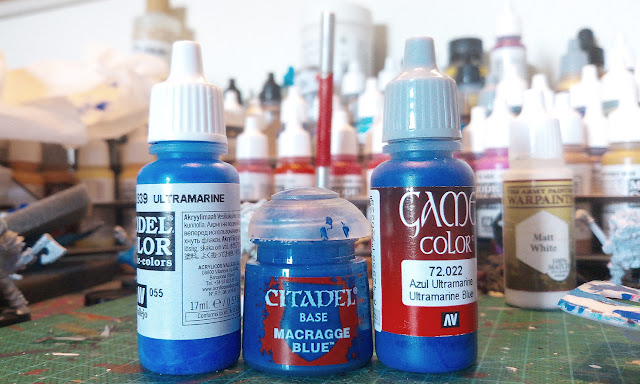 'Tis Citadel Macragge Blue, the bold new name for Marine Dark Blue. I've owned it for two years, I've obviously used it and yet I completely forgot I had it. And two pots of Vallejo Ultramarine Blue. Why did I buy it twice? With this discovery, I removed the Termy from his base and pulled his arms off. He's heading for a nice bath in some Simple Green to remove the Magic Blue. 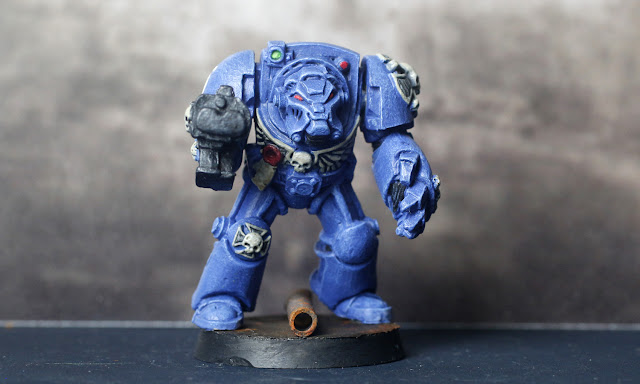 I completely forgot to take pics of the painting. Duh. So, here he is, my first metal OG Terminator since 1993. The Macragge Blue worked really well and is way closer to my old Ultramarines army. Ultramarine Blue, which back ye olden days would have been the topcoat, was just used for highlighting, and Army Painter Blue Tone for shading. 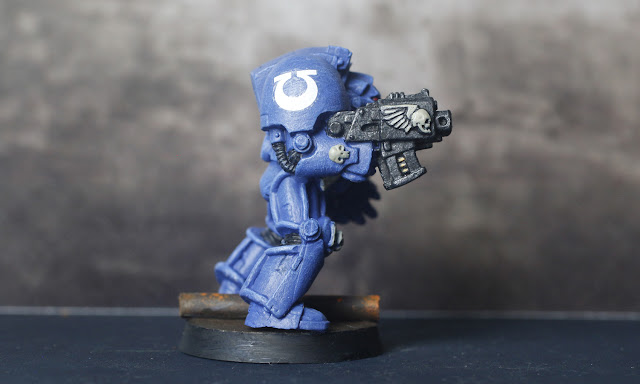 I have a feeling this model is from the era when GW's design policy became "slap skulls on everything and don't forget the purity seals." It's something I find annoying. His bolter is black and drybrushed with Vallejo Oily Steel. I refuse to do the red bolter covers as I absolutely hated them when they were introduced in 1992. 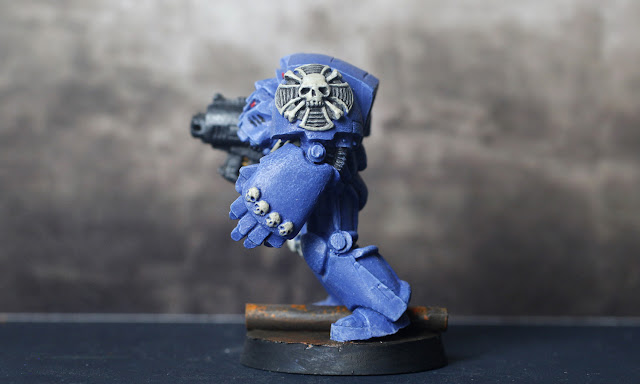 The Crux Terminatus on his shoulder pad is probably one of the coolest emblems in all of 40k. It's painted Vallejo Neutral Grey and Stone Grey and highlighted with Ghost Grey, as is the one on his kneepad and the skulls on his power fist. 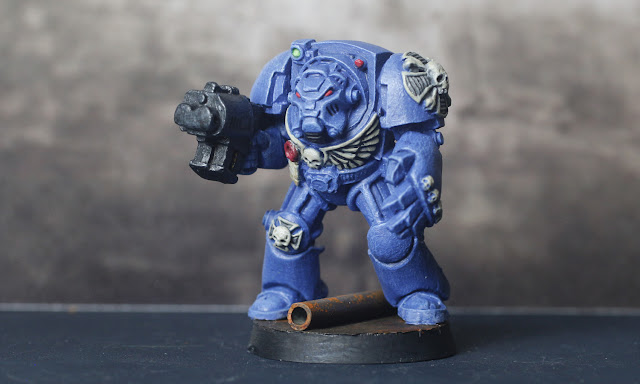 These really are among the best sculpts GW produced and I'm really happy how he turned out. My only complaint is that the base isn't great. To be honest it barely qualifies as sucky. I painted it with my Vallejo rust colours and used some plastic tubing to add some detail. I've ordered more 30mm bases and I'll redo this one when I get them.

So, one Terminator down, one to go...