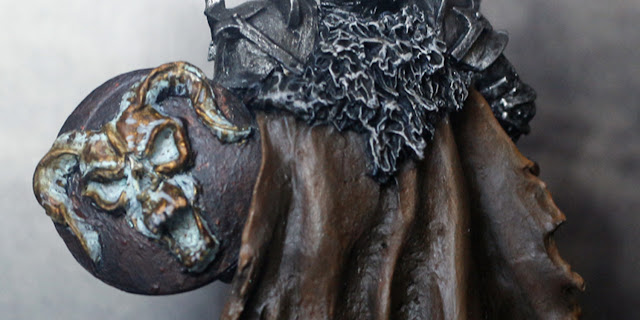 Wow. Talk about a case of nominative determinism.

Poor old Benedikt didn't really stand a chance, bless him. With a last name like Hellhorn and a "k" in his first name (the only thing missing is an umlaut over the "n"), it wasn't like he was going to be opening an ice cream parlour in a picturesque New England town. He was either going to be an evil warrior or the lead singer in a Norwegian black metal band. And Norway doesn't exist in Benny's world. 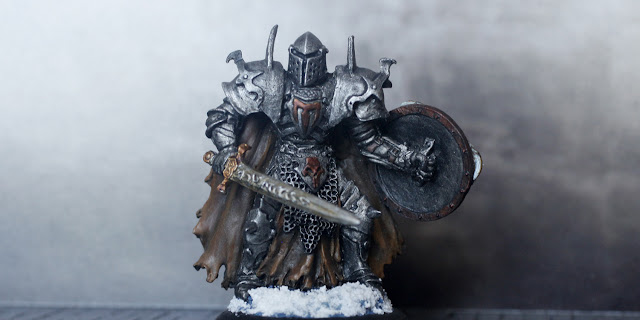 Bennyboo was one of the first figures I bought back in July 2018. He's spent the last 21 months partying it up in the Magical Box of Unloved Lead, but last week I fancied a change from painting post-apocalyptic survivors and dug him out. Benny's the second evil warrior I've painted.

I have to admit, I almost gave up on him halfway through priming him. He's one of those figures that has tons of fiddly little spots and the chainmail wasn't painted so much as stabbed with an old brush loaded with black.

I hit the armour with Army Painter Plate Metal and a thin coat of Vallejo Black Wash. The emblem and skull are Vallejo Brass with a couple of coats of Army Painter Red Tone to break up all the silver, and I used the same scheme on his sword hilt. The back of his shield is just the primer with a coat of black wash. After all that, the armour was given a light drybrush with Army Painter Shining Silver to bring out the edges. 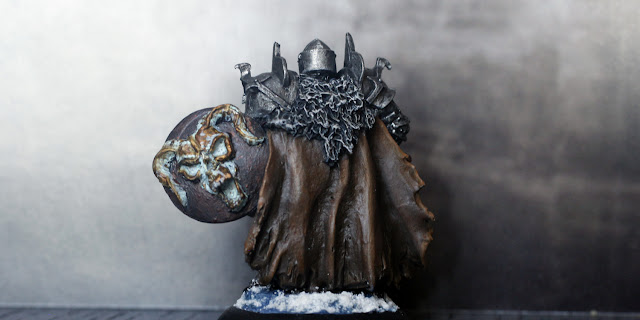 Benny's shield was a ton of fun to paint, and for once I'm not being sarcastic. I wanted to do something evil so I just gave it four thin coats of Vallejo Dried Blood. It's an effect paint that dries with a rough texture and really does look like dry blood. The demon skull was painted with Brass, washed with Sepia and then given once-over with Verdigris, another effect paint. Shockingly, it worked.

His cloak has about 900* layers of brown on it, starting with Vallejo Chocolate Brown and moving up through Umber, Mahogany, Cavalry, Orange and Light, along with washes of Umber and Sepia shades. The cloak was the only thing about the mini that worried me as I hate painting browns, but it went a lot better than I expected. The fur collar is Neutral Grey washed with Sepia and highlighted with Off-White.

He comes on a broccoli base (AAARRRGGGHHH) so I superglued him to a slotta base and filled the gaps with modelling paste. Once dry it was painted Vallejo Ultramarine Blue and highlighted with Flat Blue before being plastered with tacky glue and dunked in snow flock. That left it looking like Benny has a really bad case of dandruff, so I daubed on matt varnish to make it look more like slush, and it worked. Yay.