Weird science: Professor L.T. Froschmeister and Brain in a Jar 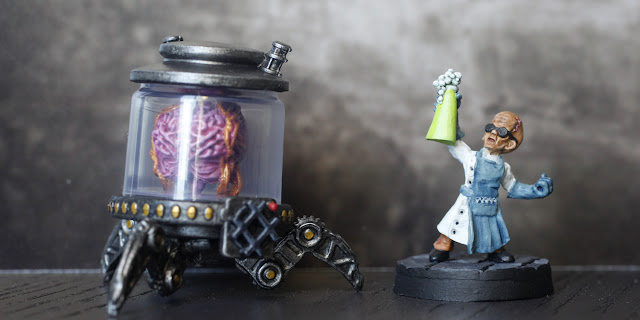 It's time to do some scienceing. 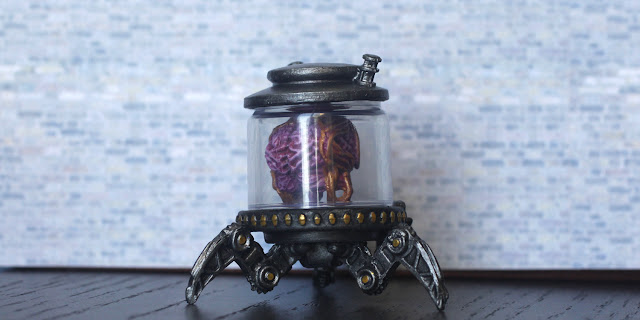 First up, here's the brain in a jar, a staple of 1950s horror movies (and a classic 80s comedy). The concept of brains in jars is a relative newcomer to horror and scifi. HP Lovecraft sort of has one in the 1922 story "Herbert West–Reanimator." They also appeared in the 1929 nonfiction speculative science book The World, the Flesh, and the Devil by JD Bernal and a year later Lovecraft revisited the theme more explicitly in his horror novella The Whisperer in Darkness.

It's amazing the stuff you learn when painting minis.

Reaper's Brain in a Jar (I'll call it Dave) comes in four parts: the base and legs, the brain, the jar and the lid. It's pretty straightforward to assemble but, as I've read on some other blogs, the soft Bones plastic can cause the legs to flatten out once it's all put together. You can see this in the top photo. You can also see a grille in the casing which I'm assuming is what Dave uses to hear and speak, so I like to think of him as a 1950s Alexa. "Dave! Play Buddy Holly's latest!"

After putting the transparent jar in another room so I wouldn't get paint on it, I started with the metal bits. After a basecoat of Vallejo Black it was a case of using my trusty Army Painter metallics: Plate Metal, a wash of Vallejo Black Wash and highlights in Shining Silver. The detailing is Vallejo Brass. I forgot to paint the Dalek-like lights on top of the lid, so they'll be done at some future point (ha!). 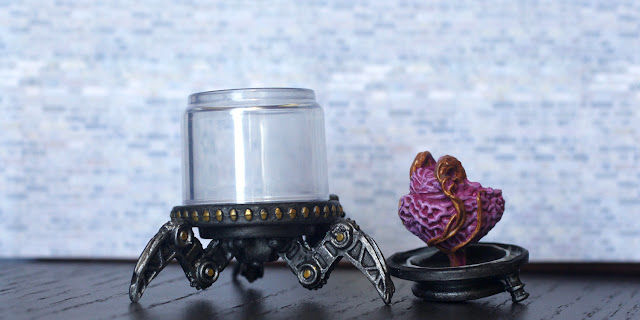 Dave appears to be making a run for it. The brain was a pretty easy paintjob: Vallejo Pink, a wash of Army Painter Red Tone and more Pink to highlight it. The wiring is in Brass. I did google images of brains to get some idea of the colours, but closed the window after about 20 seconds before I got nightmares.

The Brain in a Jar is the only mini I have that has a clear plastic element, which made for some fun and games while trying to photograph it as my circular polariser has vanished. I did think about coating the "glass" with matt varnish to get rid of the reflections but ultimately decided against it as I didn't trust it to work properly. I also had to remove two Erebus hairs from inside the jar before taking the photos. They get everywhere. 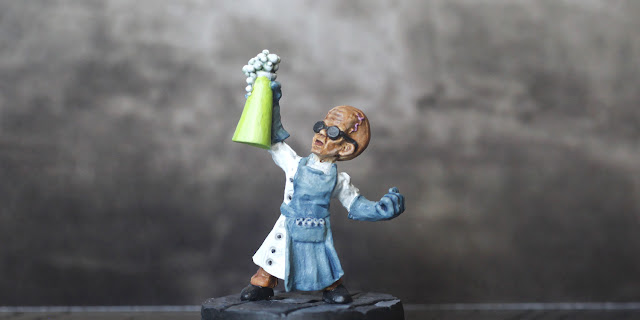 He's another Reaper mini, and as he's a pretty small figure he didn't take long to paint. White was the screamingly obvious choice for his lab coat and I went with my unnamed Reaper blue-grey for his apron and gloves. It took me a while to work out what's in his apron pocket before I realised they're test tubes, which seems an odd place to keep them.

His skin is an odd shade thanks to spending countless hours in the company of chemicals and radiation, and also because I stupidly used Vallejo Brown Rose. It's a great flesh tone but is too dark, and Froschmeister doesn't look like he spends a lot of time in the sun. The weird green liquid which is going to doom the world is Army Painter Jungle Green and the bubbles are Vallejo Off-White.

His base is a resin one, and I cannot remember the manufacturer. It's moulded to look like paving stones, so I thought it would work as the floor of his dungeon laboratory.
Labels: fun, horror, lovecraft, reaper, scifi, small, vallejo