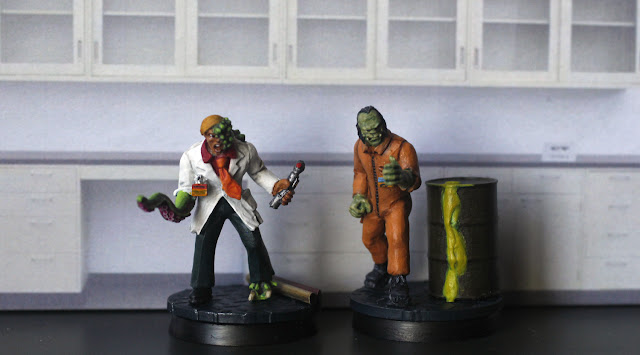 These minis have long been on my want list. They're ridiculously inventive sculpts by Crooked Dice which come with three heads and four arms, meaning I get to inflict horrifying mutations on them. MMMWAHAHAHAAAA! The heads are: horrible mutation, simian/wolfman (both above) and human-size fly head. The arms include a tentacle, crab claw, huge hand, and robotic claw. 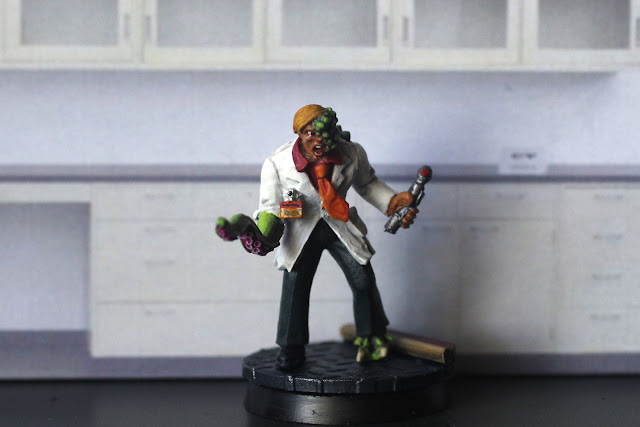 Not so smarty pants now are you, Mr. Scientist? I gave this poor sod the tentacle arm and infected head. In keeping with the 70s vibe his clothes are a mess of clashing colours: Vallejo Flat Red for his shirt, Amaranth Red for his tie and Dark Sea Blue for his trousers. I'm not sure what that gizmo he's holding is supposed to be but it does resemble the sonic screwdriver from Dr. Who. His expression is great. I can't tell if he's screaming in agony and/or horror, or roaring in exultation at his new mutant powers. Notice how he's even got an ID badge. That's how good Crooked Dice figures are. 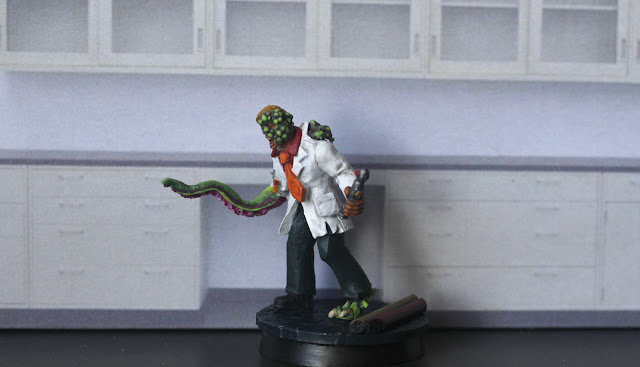 Here's a better view of the tentacle. It's painted in Army Painter Goblin Green and Jungle Green, with Vallejo Warlord Purple and Pink used for the highlights. I washed it all over with Army Painter Red Tone. His other mutations are painted the same way, with Army Painter Skeleton Bone for his claw. You can't tell from my crappy, crappy photos, but his eye is still visible in amongst all those green boils, staring out in silent horror. Alicia hates this figure.

For his base I used a topper which is moulded to look like industrial flooring, the type with the diamond patterns in it (I'm sure it has a technical name but whatever). It's painted Vallejo Dark Bue and highlighted with Army Painter Gun Metal. I added the pipes to fill a bit of space; they're just short lengths of 2mm plastic rod trimmed to fit and painted Vallejo Red and Army Painter Fire Lizard. 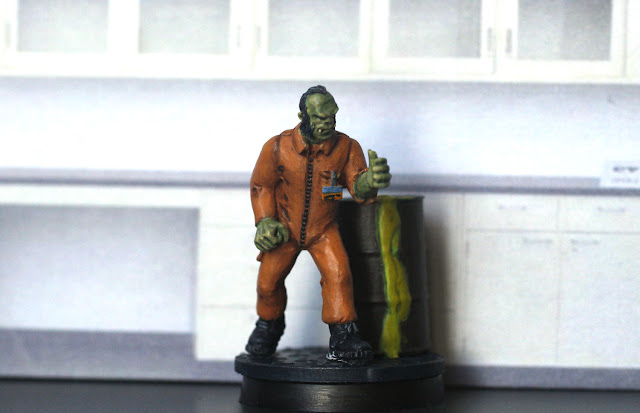 This guy was given the large hand and the weird simian/wolfman head. Just after I superglued him together I realised why he'd been ringing a bell: he looks like the strange green hairy creatures from the 1970 Dr Who serial Inferno, starring the awesome Jon Pertwee as the Doctor. A bit of googling reveals they're called Primords and were added to the story to pad it out from five episodes to seven, which makes sense as I remember them doing bugger all in the show. Here's one in all its BBC low-budget glory: 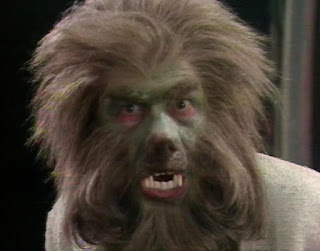 Inferno is also notable for being the last appearance of the late, great Caroline John as Liz Shaw. 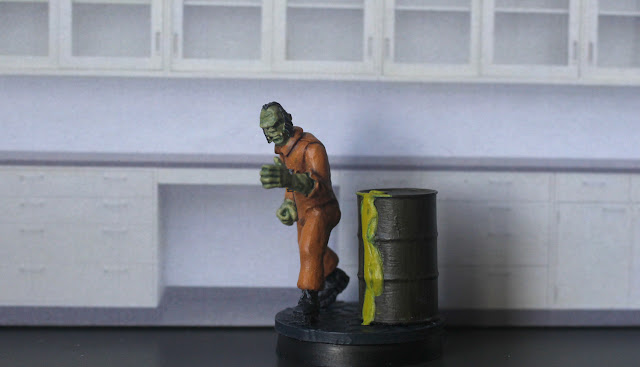 There's a resemblance, and given Crooked Dice's use of pop culture I wouldn't be surprised if it's intentional. I didn't fancy painting his overalls white so I went for Vallejo Orange Brown and Light Orange to hammer home the 1970s feel. I love the way he's staring at his supersized hand as if it's the worst of his problems. Maybe he's worried his wife will think he's been cracking one off to Mandy in accounts every lunchbreak.

His base uses the same topper as Mr Mutation above. I seem to remember the Primords being caused by contact with some green slime, so I got hold of an oil drum and painted it Vallejo Black Green to give it that industrial look. The slime is Elmer's Glue which has been run down the sides and left to dry a few times to build it up. It's painted with Army Painter Jungle Green and given a couple of coats of Vallejo Yellow Glaze to get the full toxic look. It doesn't look as good as I hoped so I'll probably redo it.
Labels: army painter, basing, crooked dice, horror, vallejo