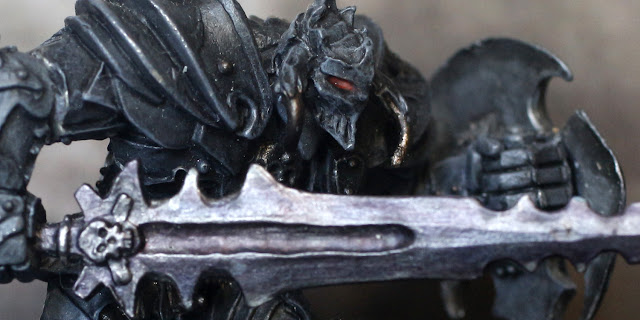 Ragnaros cannot wait for the invention of power armour. 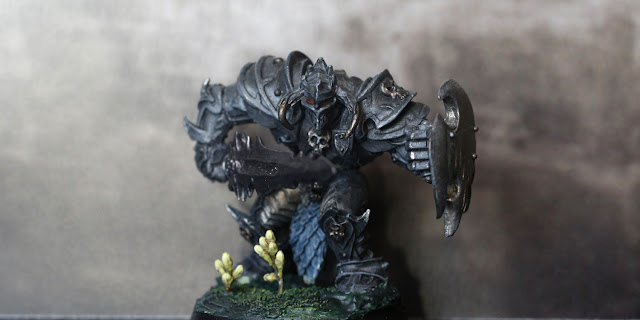 Ragnaros is another evil warrior by Reaper, and the third one I've painted. I've owned him for almost two years and finally dug him out of the Magical Box of Unloved Lead a couple of weeks ago. I have a feeling that Raggers is the D&D version of a Space Marine Terminator, and I have to admit to wondering how the hell he chases after people while wearing the enough metal to build the Titanic. 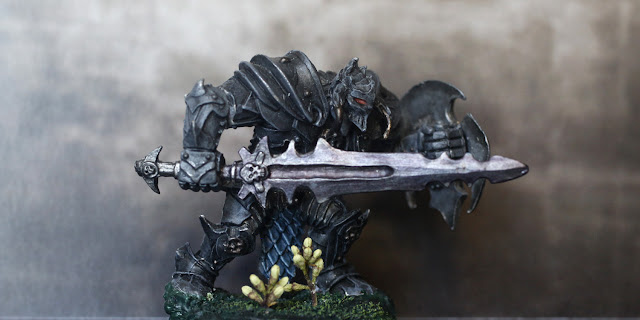 Rags was going to be painted in red and brass, but that was a bit too Khorne-y for me. I thought about basic plate metal but I'd already painted Benny in those colours. Then I spotted a bottle of unnamed, nondescript blue-grey Reaper paint that was sent as a freebie with one of my orders (Reaper sometimes hands out samples of paint that either didn't work or don't sell) and decided to try it.

After covering all of Rags with the paint I plastered him with Army Painter Dark Tone about four times and highlighted him with more of the blue-grey. The skulls on his armour and horns on his helmet are Vallejo Tinny Tin, a metallic colour that's identical to Army Painter Rough Iron, which I also own. I hate it when that happens. His eyes are Dragon Red just to add a spot of colour.

Ragnaros isn't the sort of bloke to faff about with flaming swords so I just washed his with various Army Painter washes until I got a look best described as "that'll do" and highlighted it with Shining Silver. 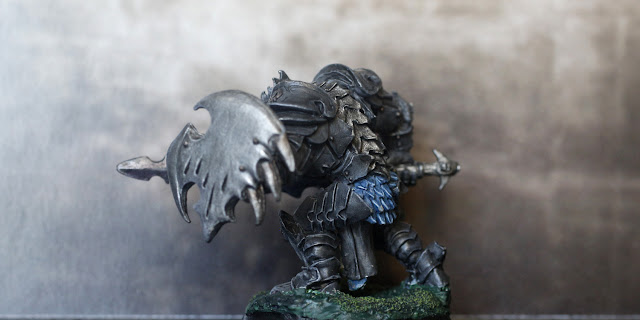 Like his sword, Raggie favours basic brutality when it comes to his shield. It's just painted Plate Metal washed with Dark Tone and the horns are Tinny Tin.

Basing him... dear god. You see, Raggers comes on an integral base that's basically a strip of metal almost an eighth of an inch thick. I managed to cut away most of it, but couldn't face filing down the bits left below his feet. This meant I had to superglue him to a 30mm base and then build up layers and layers of greenstuff and modelling paste to hide what looked like foot-high platform boots. Once that was done and dry, I dabbed on some tacky glue and dumped on some sand.

The base was painted with Vallejo Black Green, smothered with Army Painter Green and Purple tones and highlighted with Vallejo Olive Green and Yellow Green. The flowerbud things are bits of a real plant that I found while walking the pups.
Labels: army painter, basing, citadel, d&d, evil warrior, fantasy, magical box of unloved lead, reaper