More sci-fi minis! These are a bit of a mix with a touch of pop culture.

I've had all these for a while now, sitting patiently in the Magical Box of Unloved Lead for their turn on the painting table. I thought it was about time they were given some love. 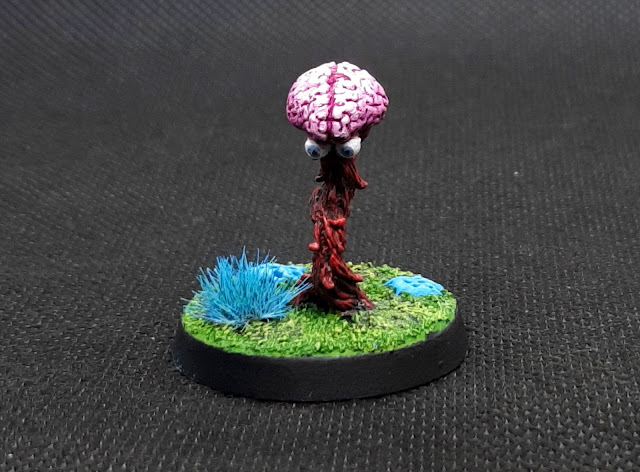 First up was a Brain Worm by RBJ Games. It's a cool-looking resin mini and was amazingly easy to paint, so yay!

I kicked off with a coat of black primer, then hit the brain stem thing with Khorne and Flat reds, both overbrushed to keep the primer as shading. Once I was happy with the red bits I gave the actual brain a coat of Warlord Purple and a wash with Carroburg Crimson. An overbrushing of Pink and then highlights with a mix of Pink and White finished it off.

Its eyes were painted Off-White then had small circles of Stormy Grey added to them. A dot of Black and he was done, and all I had to do was the base. I used Vallejo Black Lava painted Park Green Flat and highlighted with Scorpy Green. I added a couple of pools made from greenstuff, poked holes in them, and painted them Deep Sky and Sky Blue. The tuft is another Army Painter one plastered in more Sky Blue. 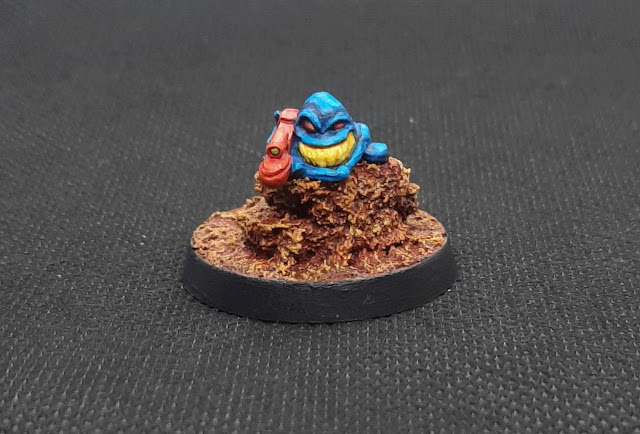 This evil-looking git is Flargh. Flargh is an odd little blob armed with a large gun who comes with Betty, Space Heroine, and I totally forgot about him until Keith reminded me in a comment on Betty's post.

I painted him Magic Blue and highlighted him with Electric Blue. His gun is Wild Rider Red, and his toothy grin is Off-White plastered with Casandora Yellow wash. A couple of dabs of Red for his eyes and he was done.

As he's all of about 6mm tall I thought he'd be lost on a 32mm base, so I used cork tiles to build up some rocks. I went for a sort-of Martian look with Calvary Brown, Filthy Brown and a wash with Carroburg Crimson. 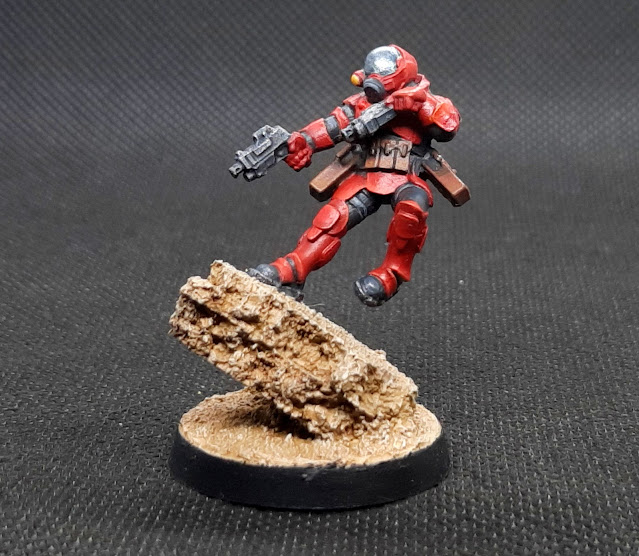 Sgt. Oberon is another RBJ Games mini. He's the second one I own; I bought and painted the first one in 2019, and this one was a freebie included in my Squealers order.

After priming him with black spray paint, he was given a thin coat of Black all over and then I hit the armour plates with (you probably guessed) Khorne Red. I used Mephiston Red and Wild Rider Red to highlight the plates, and some Black Grey on the Black.

His pouches are Mahogany Brown, Flat Earth and Agrax Earthshade and his visor got a coat of thinned Oily Steel as it's a very bright and shiny metallic.

Oberon is supposed to be on a flight stand (the hole is hidden by the pouch on his left hip) but I don't like those, so I decided to have him leaping up onto a rock. I glued two bits of cork tile together, cut them at an angle and glued them to the 32mm base. Everything got covered in PVA and sand, and then painted with Khaki, Ivory and some thinned Seraphim Sepia. 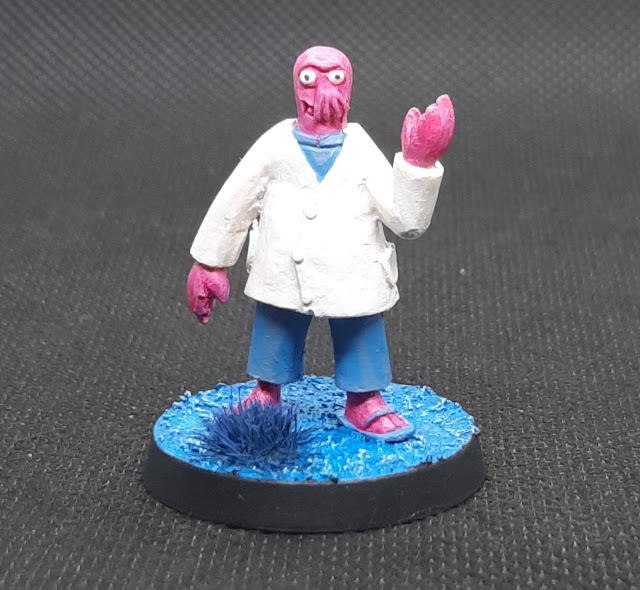 You might recognise Dr Zoidberg from Futurama, and he's one of my fave characters. I got him in 2019 from Armorcast along with my Black Troll Render. I also have Fry and Leela, but they're out of scale for 28mm, which is a shame.

He was a doddle to paint: Hoeth Blue and Blue-Grey for his trousers, shirt and sandals, Pink for his skin and Off-White and White for his coat. I think the coat needs more in the way of shading despite being slathered in Grey Wash.

I went for a blue base in honour of Zoidberg's aquatic heritage, using Black Lava paste painted with Ultramarine and Sky Blue. Another painted tuft finished it off.

As for Season of Scenery, I'm working on a bunch of projects at once. The first should be posted by the end of this week.

And now the shit news 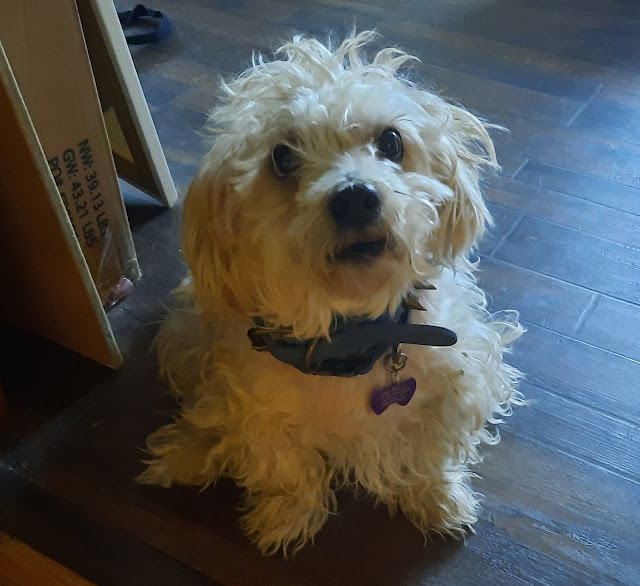 We had to say goodbye to our little scruffbag Watson on Saturday. I took him to the vet because he hadn't been eating much since Tuesday, which is totally out of character as he would normally eat anything put in front of him, and became very listless as the week went on. I honestly thought I'd be bringing him home with a course of antibiotics, but a blood test showed his kidneys had basically shut down.

He stayed overnight at the vet's on an IV drip to try to flush the toxins out, but on Saturday morning the vet called to let us know that he hadn't got any better and she recommended putting him to sleep. As Watson was Alicia's dog she had to make the awful decision, and we headed over and spent a good half-hour outside with him in the sun, petting him and talking to him as he laid on the grass. Then we took him inside.

Rest in peace, Watson. We love you so much and we miss you terribly.