Discovering what's available on Etsy must be like discovering crystal meth, only I'm pretty sure that crystal meth is cheaper and less addictive.

I've never been a huge fan of Etsy after looking up a suitable present for a friend several years ago and being blown away by the prices. However, after seeing some very cool-looking sculpts on various Reddit painting subs and discovering the painter had got them from an Etsy store, I decided to pay the site a visit on the off-chance there was something worth picking up.

Turns out that "something worth picking up" was an understatement. The rise of 3D printing has led to an explosion of stores either selling their own miniature designs or ones they've licensed from the original artist. After searching for "28mm sci-fi" I was deluged with figures, spaceships, and terrain, everything from stunning original designs to recognizable pop-culture like Judge Dredd, The Fifth Element and even The Black Hole. It was like being a kid in a sweetshop again, only this time I'm 50 and have a magic piece of plastic that never seems to run out of money. 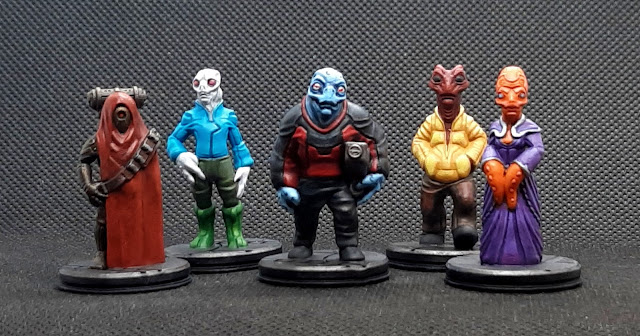 Anyway, the group of figures above were the first thing I ordered. I've always been a bit iffy about 3D prints thanks to my experiences with EnderToys and their crappy prints, but these had good reviews and cost a modest $10 including shipping. Two dollars a figure? You can't get a single Plague Marine on Ebay for that!

They were delivered in about five days, and I was very happy with them. The print quality is really good, they took paint wonderfully and there's enough detail on these to make Reaper Bones weep. So, on with the painting. None of these minis have names, so I made some up as I went. Ghils was the first one to be painted. They were all brush-primed with Vallejo Black Primer as I wasn't 100% sure if it's safe to use spray on the resin. His jacket has panels embossed into it, so I went for a red-and-black look because apparently my brain won't let me do anything else these days. After painting in the black areas with, er, Black, I hit the red bits. I wanted to go darker than my usual red tones, so I started with Burnt Red, highlighted it with Khorne Red, and then gave it a second highlight with Mephiston Red.

His trousers and boots are just Black highlighted with Neutral Grey, and whatever he's carrying under his arm (a futuristic ghetto blaster? a laser gun? the gearbox from a 1981 Austin Allegro?) is Plate Metal and Nuln Oil.

I decided on blue for his skin, starting with Dark Sea Blue and immediately going much lighter with Deep Sky Blue and Sky Blue. The markings are just blobs of Drakenhof Nightshade with dabs of Sky Blue inside them, the same technique I used for Sly Withers back in January. Sho'Aell was next, and as she/it looks kind of regal I painted her dress Royal Purple with Hexed Lichen highlights and Silver trim. Her skin is just Heavy Orange washed with Casandora Yellow and a touch of Carroburg Crimson and highlighted with Light Orange.

A touch of Sky Blue for her eyes and she was done, making her by far the easiest one of the group to paint. 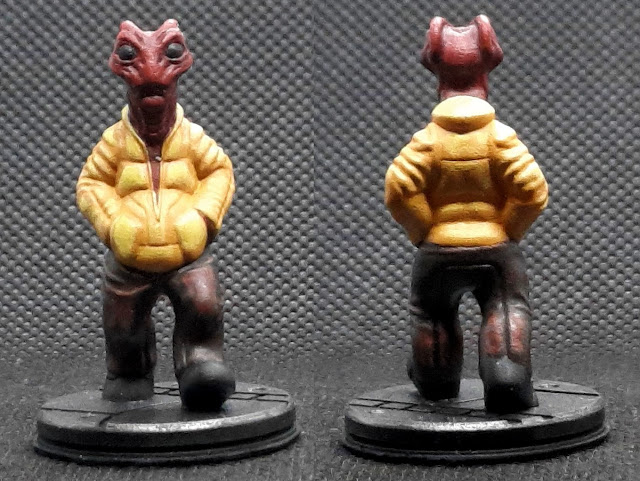 Ilqens isn't my favourite of these minis, but he's the reason I like the models so much. He isn't holding a gun, he isn't particularly tough looking or threatening, he's just strolling down the street to McZorgalds for a McLegburger with extra eyes. It was actually refreshing to see a group of sci-fi figures that aren't holding weapons of some sort and are just going about their business.

Anyway, Ilqens' jacket is Lemon Yellow over Averland Sunset, and the fact I went for this colour when a year ago I wouldn't touch yellow is just awesome. His trousers are Chocolate Brown with Bugman's Glow highlights and a wash of Agrax Earthshade.

I wanted an almost reptilian look for his skin, and Black Red, Burnt Red and Cavalry Brown worked really well. 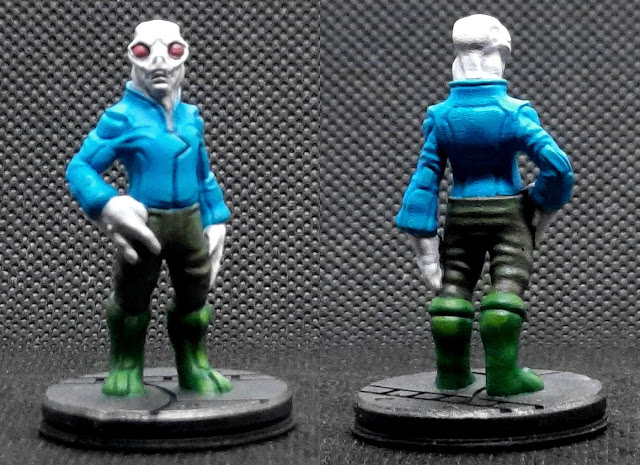 Kephiks looks like he's striking a pose, as if his neurally-implanted iPhone is playing "Vogue" by Madonna straight into his cerebral cortex.

After hunting around for another colour, Light Turquoise caught my eye so I used it for his jacket, and highlighted it with Blue-Green. His trousers are fairly boring, being Castellan Green and Loren Forest, and I've just realised his boots look like green wellies. They're Mutation Green highlighted with Golden Olive.

His skin looks great, and really stands out. It's Ghost Grey shaded with Grey Wash and highlighted with Off-White. Kephiks' eyes are Pink. 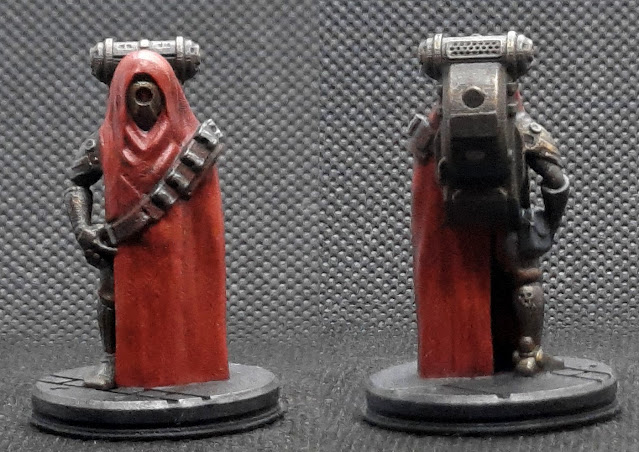 Misloi is the most mysterious and potentially threatening of the lot. Although she (for some reason I think of this figure as female) isn't armed, that doesn't stop her from looking dangerous.

She has a bit of a jawa look, so I did her robes in Cavalry Brown shaded with Nuln Oil and highlighted with more Cavalry Brown. The belt of grenades/shells/soda cans across her chest is Burnt Umber, Mahogany Brown, Iron Warriors and Agrax Earthshade.

Her backpack, armour and mask are a mix of Chocolate Brown and Black, and I added some Flat Earth for the highlights. For a final touch I lightly drybrushed it all with Bronze and a dab of Polished Gold.

Her eye/visor is Averland Sunset with a drop of Carroburg Crimson. In a stunning confession, Misloi is to me the best sculpt of the lot, although they're all pretty awesome.

All of them are on integral bases, and usually I hate those. These ones are actually pretty cool, and they're just painted Black and Iron Warriors.

So that's five more aliens, and with Summer of Scenery kicking off... er... yesterday, I'll be starting on the list of sci-fi scenery I've got planned for the next eight weeks. Stay tuned for the next thrilling installment!

A bit of a result

I realised that if there's one thing a sci-fi theme needs, it's robots. I spotted a Reaper Iron Golem while buying more shit some stuff on Amazon, and decided it would work as a chunky android. It's even got a bit of an ABC Warriors look to it. So I chucked it in the basket. Today a package turned up in the mail containing these: 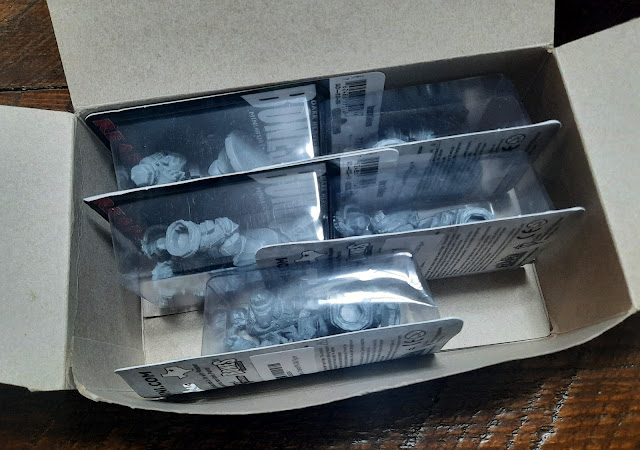 Yep, five Iron Golems. I checked my Amazon orders and I definitely ordered and paid for one (1) Iron Golem. So I don't know what happened, but do I care? Nope.