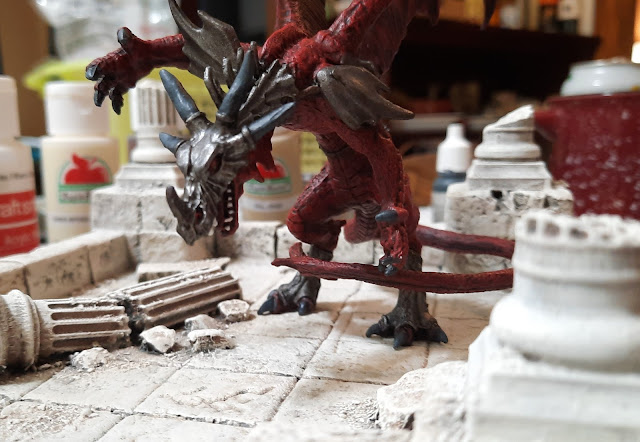 Dewi stalks his domain, his rage building, his anger shaking the temple to its very foundations as he desperately searches for his contact lens.

This morning I made an early start on the temple, helped by the fact that I woke up at 4.30. No, I don't know why either. 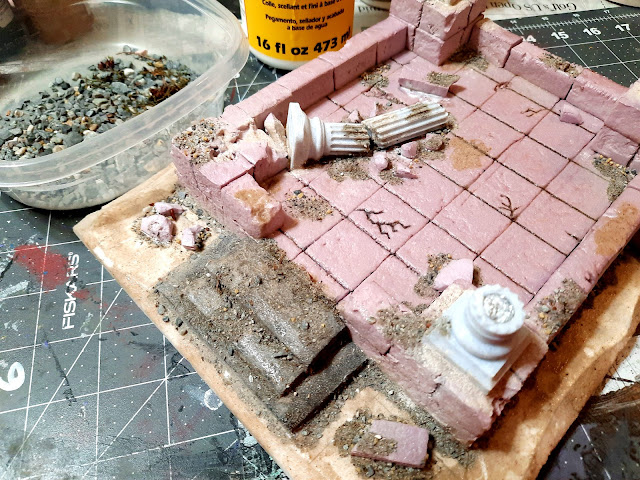 Before priming the model I went on another hunt for the missing sand. It was still missing, but I did find a container of small stones and grit so yay, I guess. I daubed Mod Podge around the edges of the temple, the blocks and fallen column and sprinkled grit over it to add some more texture. It was spattered with more spray glue and put outside in the sun to dry.

Alicia later found the sand on a shelf in the spare room. A shelf I'd checked twice. It's definitely that bloody gremlin, and he's also probably responsible for all the Etsy and Reaper minis that keep showing up in the mail. 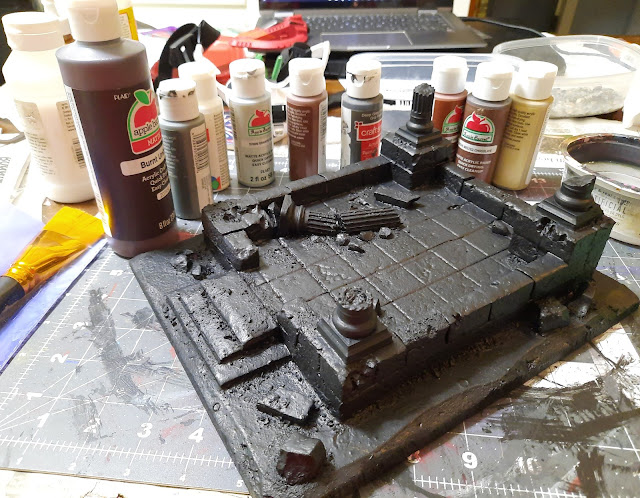 I thought about taking the base downstairs to spray prime it, but then thought I may as well just slap on a coat of black craft paint as it would be faster. And it would mean not having to worry about melting foam. Using a large flat brush, it was primed in no time. 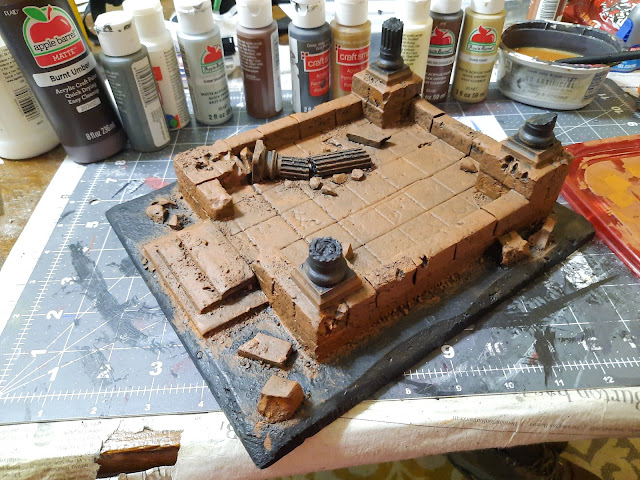 I'm going to use the same technique of undertoning on the temple that I used on my ruined chapel. Basically, instead of just drybrushing with greys I first painted the whole temple with Chestnut craft paint to give it a warmer tone. God I hope this works, it's not like I can chuck it in a bowl of Simple Green. 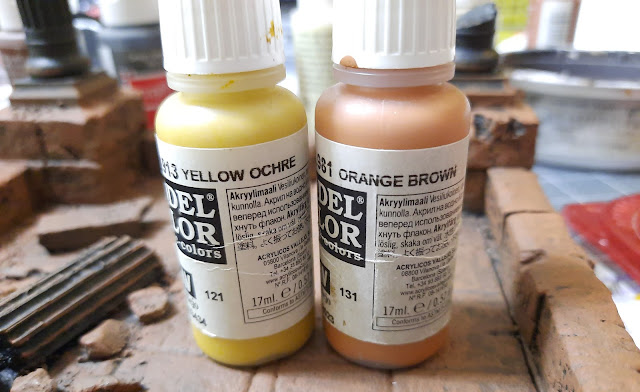 The next stage is to paint random bits of the temple with a couple of colours that match the tone of the basecoat, so I went for Yellow Ochre and Orange Brown. I first made a 50/50 mix to do the midtones, then I used the yellow, then the orange. 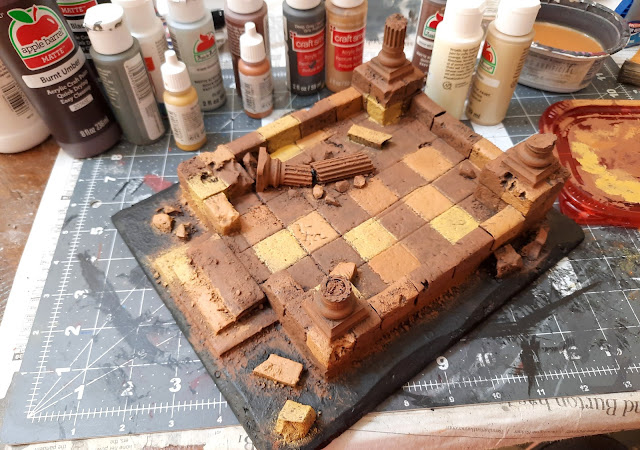 It's the world's worst chessboard! Looking at this I was really hoping I hadn't just taken a gigantic dump on my awesome temple. 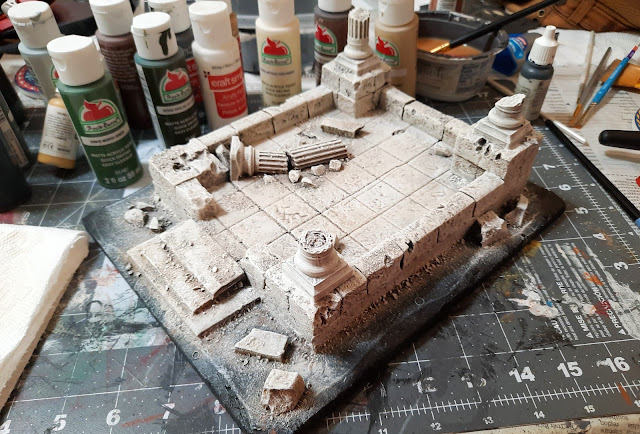 Well well well, guess who forgot to take photos of at least two stages? Anyway, we've reached drybrushing time. You can't tell, but the whole temple was heavily drybrushed with Khaki craft paint, then a mix of Khaki and Antique Parchment craft paints. A final lighter once-over with pure Antique Parchment finished it off, but in the process I obliterated the underlying warmer colours and basically wasted my time doing them. Obviously I overdid the first stage of drybrushing, but on the other hand I'm pretty happy with this look. 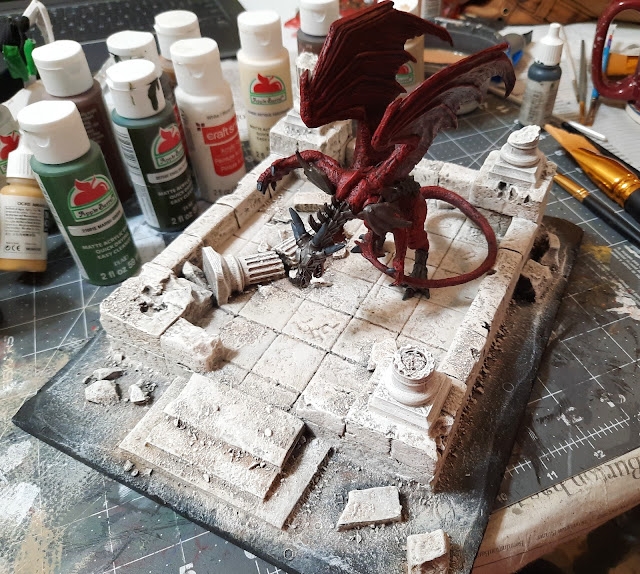 Here's Dewi lording it over the kitchen again. He's doing a very good job of guarding the Keurig machine and the cupboard full of dog treats, bless him. One thing I do like about this very light tone is that it's a really good contrast with his red skin. 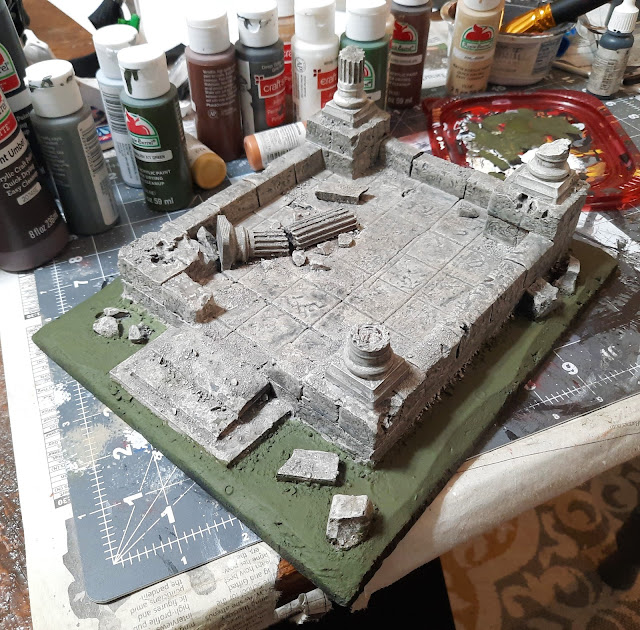 It's time to tone things down a bit. I poured some of my homemade black wash into a pot and thinned it with water, then liberally plastered it all over the temple, columns and rubble. After it dried I did it again, this time to dirty the stonework as well as increase the shading.

While the wash dried I gave the ground-level base a couple of coats of English Ivy craft paint in readiness for it to be thoroughly flocked.

So that's where the temple stands at the mo. I'm hoping to get more done tomorrow, basically giving the stonework another drybrush to lighten it a tad and making a start on the surrounding base with PVA, tufts, flock, and swearing. Till next time, amigos!