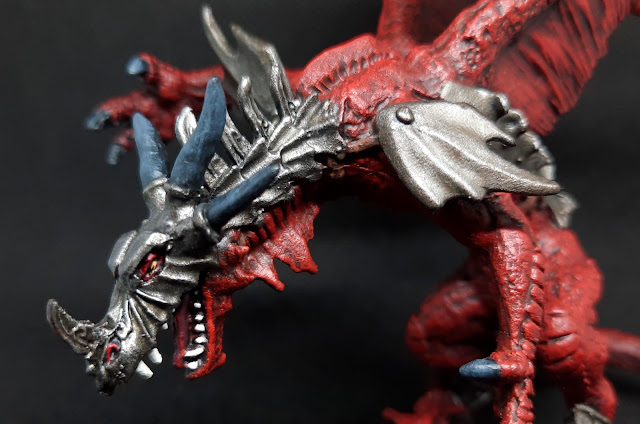 A bit of a break from sci-fi, scenery and sci-fi scenery today. Here's a bloody great big red dragon.

For those who aren't from God's country, Y Ddraig Goch is Welsh for The Red Dragon, which is the name of our flag: 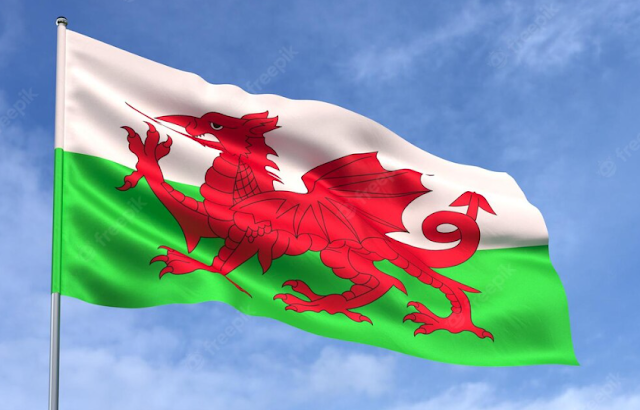 As you can see, it's absolutely awesome and is so much better than a bunch of stripes. The dragon is on the green and white background because that was the livery of Henry Tudor, who adopted the dragon as his standard and used it as part of his Royal coat of arms after defeating Richard III and becoming Henry VII. Not only that, but the dragon has appeared in, of all places, Marvel Comics where he battled Thor. And with Wales qualifying for this year's World Cup for the first time since 1958, my flag will be flying high in our little corner of Vermont.

Anyway, painting. I've had this dragon for about 18 months and it was originally bought for Monster Mayhem, but I never got around to it. He comes with a rider, but the modelling on her face was a bit soft so I binned her. After thinking about colours, I decided to go with reds.

As I can't be bothered typing "dragon" over and over, I've named him Dewi, which is Welsh for David and the name of our patron saint. 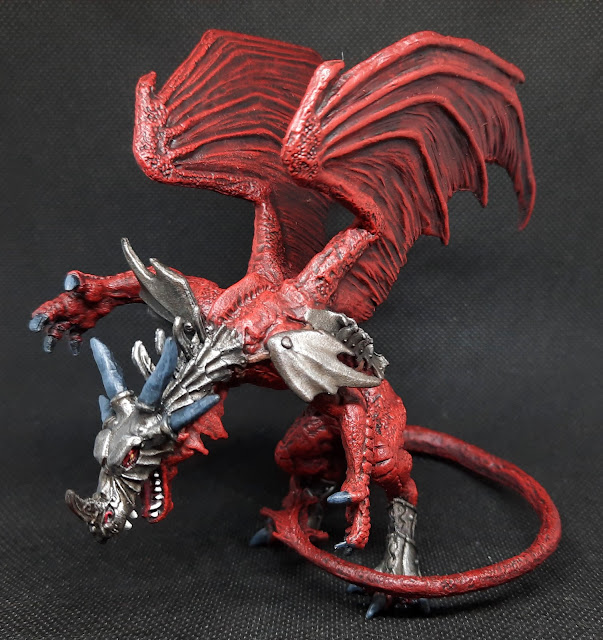 Things got off on the wrong foot when my new can of Ultra Matte black primer dried glossy. Yay. I tried to fix it by spraying Dewi with matte varnish, only for the varnish to frost and make him look like he'd got a bad case of dandruff. I ended up buying yet another can of matte black primer and this time it worked, so after a couple of days of waiting for paint to dry I was finally able to start the red bits. 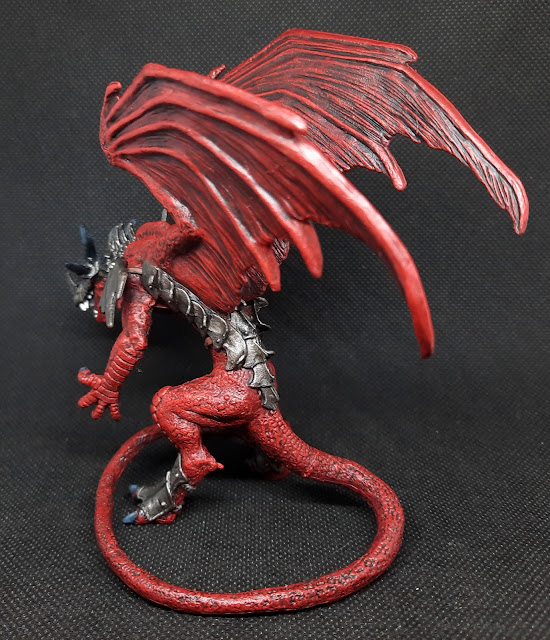 At heart I'm a lazy git, so I decided to use the same technique I used when I painted my Temple Dragon back in December last year: overbrushing. Or wetbrushing, it's the same thing. I kicked off with a heavy overbrushing of Khorne Red, trying to get a good base for the lighter shades while preserving the black primer in the deeper shadows. 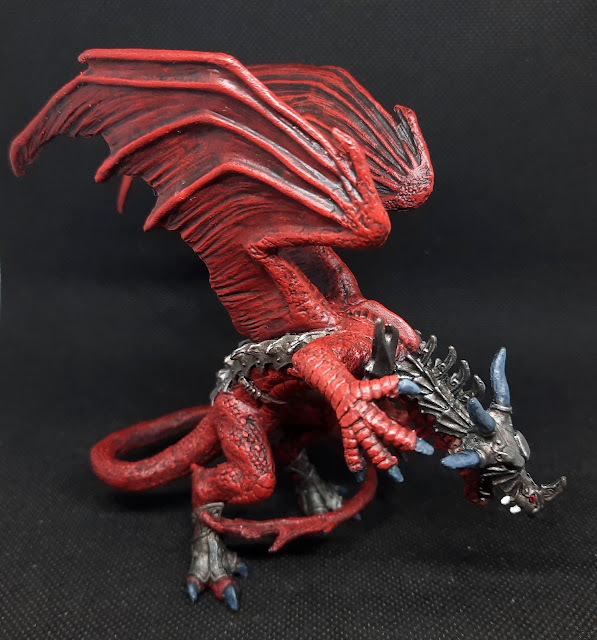 After painting the Khorne Red with a coat of matte varnish as I suddenly didn't trust my spray can, I gave Dewi a lighter overbrush of Flat Red, aiming mostly for the upper half or so of the wings and body. Overbrushing is a really effective and fast way of knocking out a large mini and I'm all for that.

The final overbrushing was of Vermilion, mainly on the upper-facing areas. 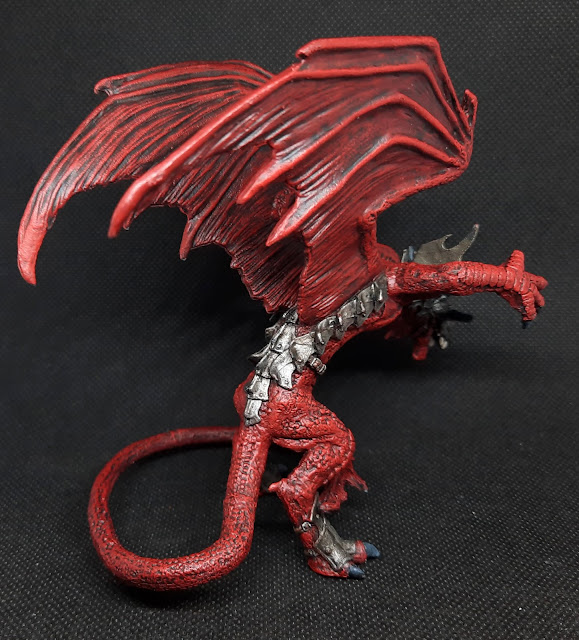 With the reds done, it was time for Dewi's armour. Iron Warriors, which is an absolute gift for doing silvery metallics, worked beautifully as a basecoat, and then I shaded it with Agrax Earthshade as I wanted to keep some reddish tones which Nuln Oil wouldn't have given me. After that I gave it a light drybrushing of Plate Metal.

The straps holding on his armour (and which poor bugger gets to strap armour onto a dragon? It's bad enough trying to get Erebus' harness on) are Chocolate Brown, Mahogany Brown and more Agrax Earthshade.

His claws and horns were originally going to be Ivory, but after painting two horns the off-white was way too much of a contrast so I redid them Black, with Black Grey and Neutral Grey highlights. I don't know why they appear so blue in the photos, and I'm going to give them a once-over with Nuln Oil to tone them down a bit. 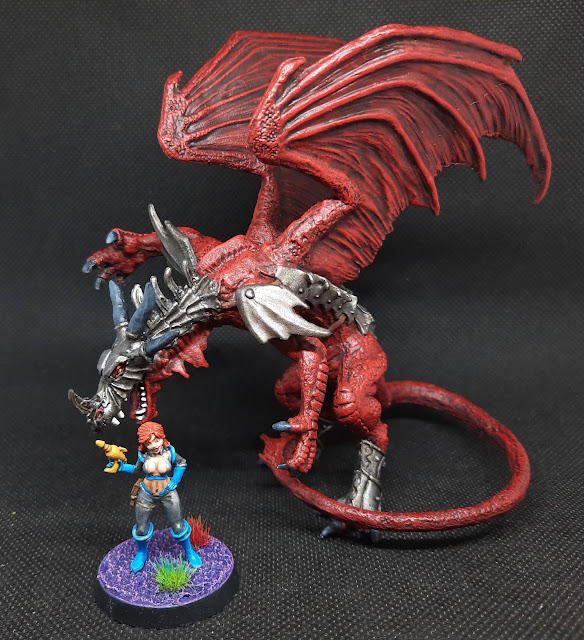 Here's Betty for scale, and I know a sci-fi figure is a bit out of place next to a dragon but not only was she close to hand on the kitchen table, but Faust seems enamoured of her, so she'll do.

One thing you might be thinking is, "Oh wow, you put a lot of effort into the base". And this is true but for a good reason: the dragon's base is one of my projects for Season of Scenery, and I'm starting work on it today. Or maybe tomorrow. But it will be done soon. Ish. Honest.