The landing pad is being finished, so for now you'll have to slake your thirst for quality content by going somewhere else checking out this quartet of robotic chums.

If there's one thing a sci-fi setting needs it's robots, unless you're talking about the movie I, Robot, which only needs to be fired into the sun. So I dug these chaps out of storage and painted them up as a break from doing the landing pad, which will get its second post soon. 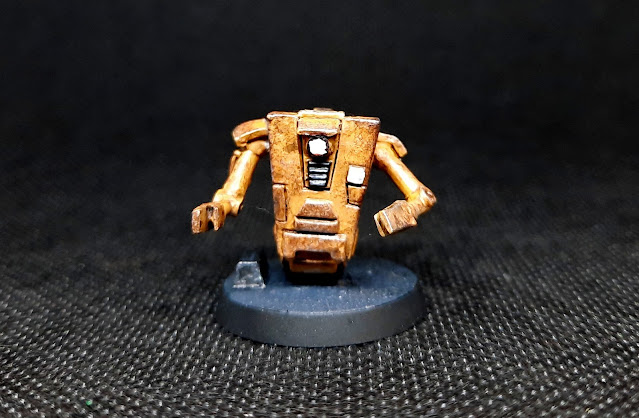 We kick off with the GGW3000 Dance Bot by Robot Townies. I think I got this one at the same time as Dr Zoidberg back in 2019, and Christ what a crap sculpt it is. It didn't so much have flash lines as the whole mould was misaligned, leaving its front and back pretty much in separate universes. So it was chucked into storage (actually almost chucked in the bin until common sense prevailed for once) and I dug it out last week.

I had no idea it's a dance bot so I painted it to look like a maintenance droid, and given its resemblance to Wall-E I went for dirty yellow and renamed it Will-E.

After a lot of filing and sanding Will-E was given a quick prime with Black and then painted Filthy Brown all over. I washed him with Agrax Earthshade and then overbrushed with Averland Sunset and Yellow Ochre before dabbing it with Dry Rust. Er... and that's it, apart from a couple of areas of Black and the fact I just realised I didn't paint his eye lens. Oops. Despite my initial annoyance at the shitty state of the model I do like it a lot more now, although I've never ordered anything from Armorcast since. 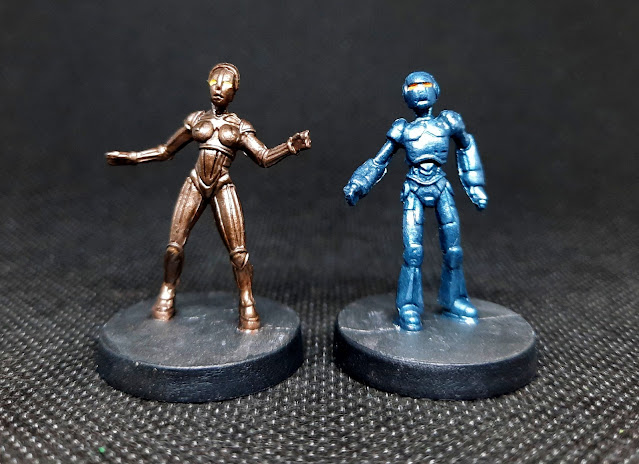 This pair is by Reaper and is simply called "Androids (2)", so I guess the Reaper marketing department earned their money that day. I named the one on the left Automatic Translator, or Autran, and the right one Valid Information Checker 2.0, or VIC-20, or just Vic, after the first computer I owned.

Autran is obviously inspired by the Maschinenmensch from Metropolis crossed with a touch of C-3PO. She was painted first, with black primer and a Mahogany Brown basecoat. Her metallic shades are courtesy of Tinny Tin, Seraphim Sepia and more Tinny Tin mixed with Silver.

I did her eyes Averland Sunset and Yriel Yellow as a nod to Threepio.

VIC-20 was painted Deep Sea Blue over Black primer, and then given a top coat of Gunmetal Blue, which is a metallic shade I've used more in the last couple of weeks than I have since I bought it in 2019. I mixed in some Silver for the highlights, and his eyes are Troll Slayer Orange. 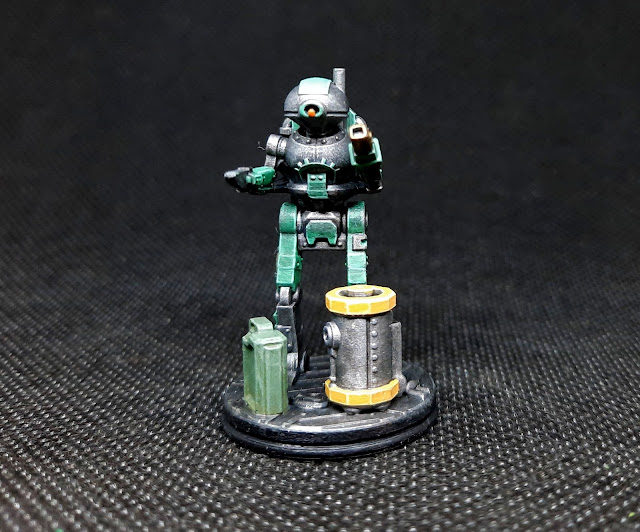 L4Ri (or "Larry"), as I've named him, is an Etsy buy because if you're going to go broke you may as well go broke doing something you love.

After gluing his top half to his legs, he was primed with Neutral Grey and then painted Iron Warriors all over. I gave him a wash with Nuln Oil and then a light drybrush with Plate Metal.

I hunted around for a suitable green and decided on Sybarite Green, one of Citadel's layer paints that I picked up last year simply because I liked it. After painting it over parts of Larry's body I washed it with Nuln Oil to tie it in with the silver areas, then highlighted it by adding some White. The blowtorch on his left arm was painted Brass.

I painted the entire base with Iron Warriors and then hit the container on the right with some Plate Metal, Averland Sunset and Moon Dust. The jerry can was painted Olive Grey.

As I said, the landing pad is probably 98% done and will be up soon, so stay tuned!

The headline for this post is SHIT. Sorry about that, usually I can come up with something more descriptive but it's 93 degrees outside and my brain packed up about an hour ago. The part of me that used to write headlines for a living is disgusted.