I've managed to fight the stinking cold I caught from somewhere (hint: Alicia) long enough to finish the first five Squealers, so may I present, from left, Neville, Spike, Sarge, Chops and Wendy.

These diminutive porkers took a lot longer to get done than I thought, and catching the cold didn't help. On the upside, I took a Covid test and it was negative, so yay. The Squealers are well sculpted and given they're about 20mm tall they have a lot of decent detail. I painted them in a kind of production-line way, doing the base colours on each one in turn, then all the shading, highlighting and skin tones the same way.

I decided to use a limited palette for these guys and just mix and match the colours for each one. I basically stuck to Orange, Cavalry and Light browns, Blue-Grey, Burnt Umber, Loren Forest, Olive Grey, and Plate Metal for their clothing and metal bits. All the leather is Chocolate Brown, Mahogany Brown and Flat Earth, and all the wooden parts are Japanese and English uniform. 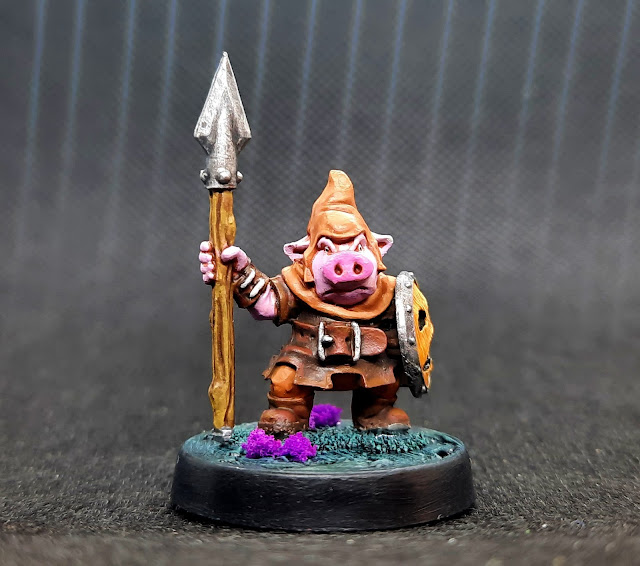 Sarge is the veteran leader of the squad. His spear has had four new heads and seven new shafts down the years, but it's still the same spear he was given long ago when he was promoted from the ranks.

Sarge got a pretty basic scheme of Chocolate Brown and Orange Brown. Thankfully you can't see the emergency repair painting I had to do on the top of his hat after dropping him on the kitchen counter while setting up the lightbox. 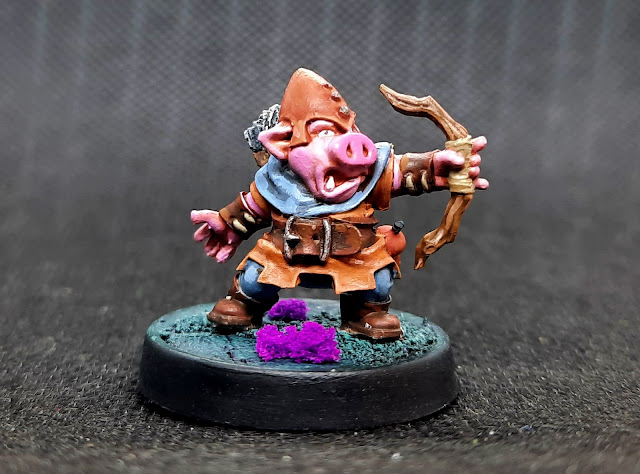 Wendy is a crack shot with her bow and has taken down her fair share of harpies, giant bats and other flying menaces, as well as providing some long-range firepower for the squad.

Wendy was the first Squealer to be painted, in Blue-Grey and Orange Brown. She's my fave of the bunch thanks to her dynamic pose and great facial expression. 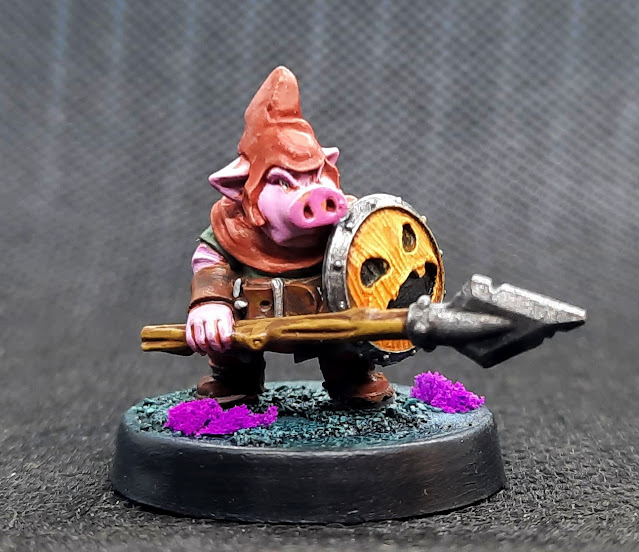 Spike's not too bright, but he's a dab hand with his spear and that's all Sarge cares about.

Spike is clad in Loren Green and Cavalry Brown. The shields have the black areas painted in first, then the face is Filthy Brown washed with Casandora Yellow and highlighted with Averland Sunset and Moon Stone. 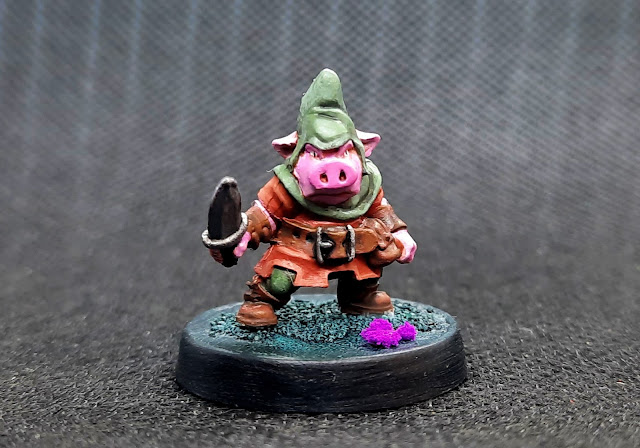 Neville is the newbie to the squad, so for the moment he's only trusted with a short sword.

He's also wearing Cavalry Red and Loren Green, but reversed. Cavalry Red is a bit of a bugger to highlight, as adding yellow makes it too orangey and adding white gives it a pink look that's just awful. I ended up using a couple of layers of Red Leather to get the look I wanted. Oh crap, I missed the stitches on his armband. I'll paint them in later. 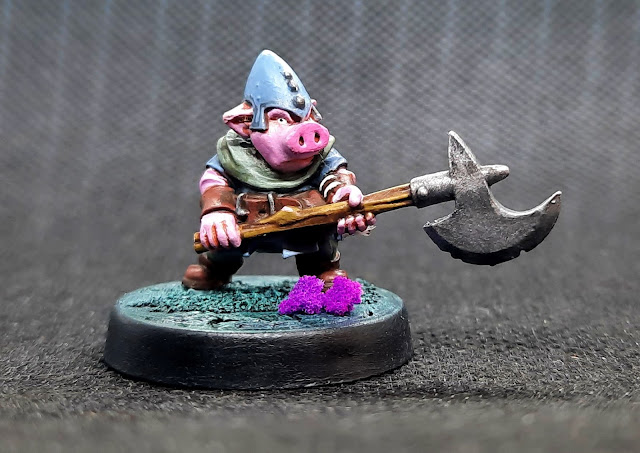 Chops is the squad's heavy-hitter; one strike with his halberd is usually enough to take down an enemy.

I finally decided to ban brown from Chops' clothes, and did them in Blue-Grey and Loren Green.

I based all their skin with Brown Rose and shaded it with Riekland Fleshshade. It was highlighted with a mix of Pink and White, and I wasn't too concerned about getting the skin tones the same on all five models. It's not like real people (or pigs) have identical skin anyway. Being Welsh I was born pale blue and had to spend my first four years under a sun lamp just to turn white. I'll never forget my seventh birthday when my parents sat me down and broke the joyous news that I could, in fact, take my raincoat off. Anyway, all of their adorable noses were painted Pink.

So I have five more Squealers to finish, and they're in various stages of being basecoated. Monster May(hem) is on the horizon so I've been digging out suitable minis for it and I've got a couple of corkers I'm hoping to get done that month.

I'm off to chug down some more cough medicine and have a nap on the sofa. Peace out!