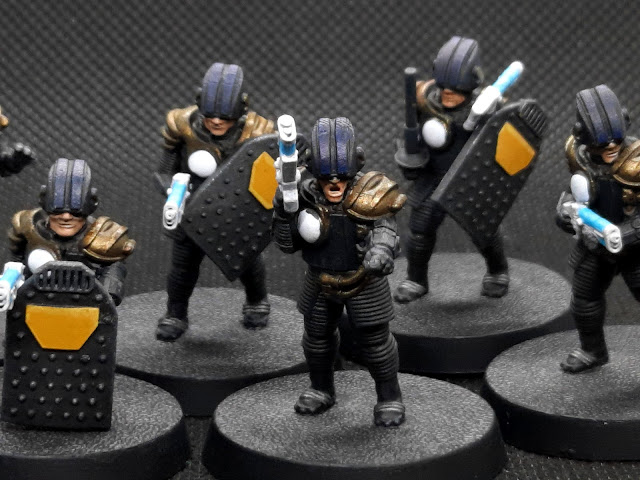 "Sir, are you classified as human?"

I've said it once and I'll say it again: DAMN YOU ETSY! I spotted these guys last week and had to get them. The Fifth Element is one of my fave movies. It's got everything: sci-fi, wisecracks, aliens, awesome costumes by Jean Paul Gaultier, the fate of the universe in the hands of muppets, great music, explosions and lots of action, not to mention Bruce Willis, Gary Oldman, Milla Jovovich, Chris Tucker and Ian Holm. It is a bit of an incoherent mess but it's a ton of fun.

There's 10 officers in total, so I've split them into two squads of five. Happily they were very straightforward to paint. 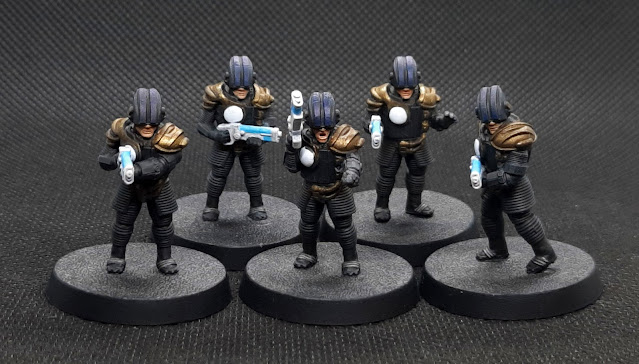 After priming them with black spray paint, they were given a bit of an overbrush with Black Grey to bring out the details on their unifomrs (which look very uncomfortable to wear). Easy bit over.

The metal bits are actually supposed to be more coppery in colour, but after experimenting with Vallejo Copper over Heavy Orange and realising it would take about three coats of copper to look good, I went with a basecoat of Chocolate Brown coated with Bronze. A wash with Seraphim Sepia deepened the tone a bit. 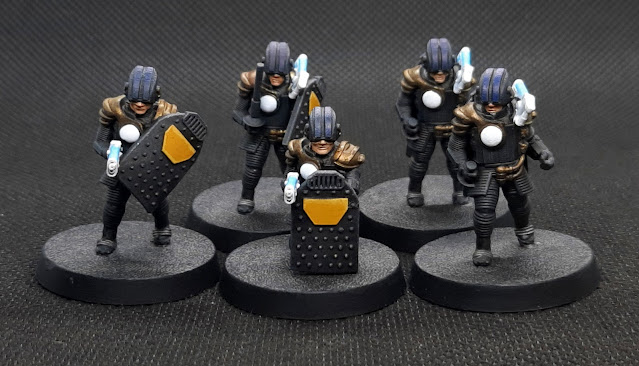 Their shoes are supposed to be silver, but I thought they looked odd so I just did the tops in Shining Silver. I gave the front bits of their helmets a Blue glaze to make them pop a bit more, and then it was time for the weapons.

The riot shields were a doddle as the primer and highlighting had already done the majority of the work. I drybrushed a small amount of Plate Metal onto them to bring out the studs and the edges a bit more, and then the yellow area was painted Averland Sunset with a couple of layers of Lamenters Yellow to brighten it. I edge-highlighted them with more Averland Sunset. They're supposed to be emblazoned with "POLICE" but that wasn't happening.

From looking at images online, the guns could be silver with blue trim or white with orange-yellow trim. I went the white route, using Off-White, Grey Wash and White, and then I added Sky Blue for the trim as I thought it looked better.

The final task was to paint their faces, or at least the part of their faces you can see. Some of my flesh mix with Reikland Fleshshade to shade and more flesh paint to highlight worked well.

The bases are painfully basic, just Iron Warriors and Nuln Oil. I really should have come up with a base design and done them before gluing the minis on. 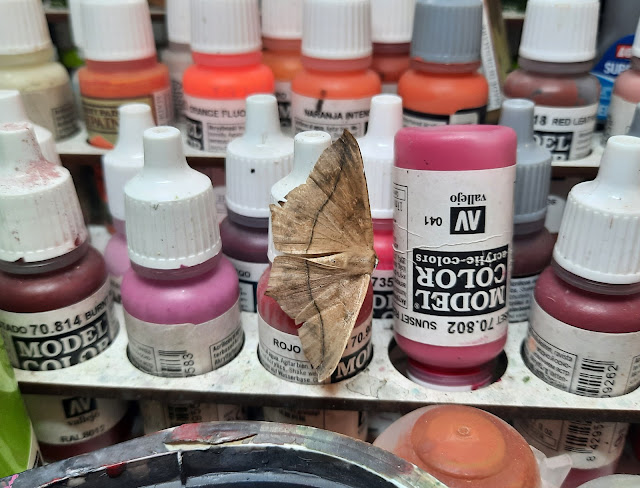 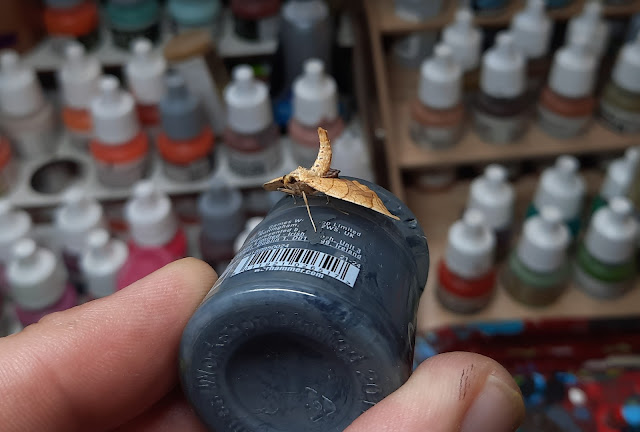 A certain person who shall remain nameless (Alicia) left the spare room window open last night, so I snapped photos of two of the roughly 3,000 moths that got in during the hours of darkness. Great.

Holy crap, making scenery from scratch is a lot harder than painting MDF buildings. Even the billboard was easier than the sci-fi stuff I'm making at the mo. But it's moving along (a lot faster than a certain fantasy cottage) and I promise something will be up soon.