I really don't like flight stands. The flight stand is that clear plastic rod you can see disappearing into Sgt. Oberon's hip. I'll give RBJ Games — they of the free dog — credit for not sculpting the figure so the rod disappears up somewhere else.

My problem with flight stands is that once you've seen it, you can't unsee it. They do help make a mini more dynamic, but they've never really been my cup of tea. So you're probably wondering: Why did I buy this figure?

Well just look at it. It's totally cool. An astronaut leaping through the air while firing two pistols? Come on, what's not to love? Apart from the flight post.

Oberon spent a couple of months in my display case (which, contrary to the above pic, is not outside) stuck at the back of the shelf. My disdain for the flight stand was such that I didn't even bother to do anything to the 20mm base it was stuck into. Which, given how much effort his paint job took, was pretty dumb of me. At this stage I was still drybrushing and kept getting the grey (Army Painter Necromancer Cloak) onto the orange (Vallejo Amaranth Red) and vice-versa. His visor, which in my head would be a smooth glistening gold, turned into a nightmare of paint that wouldn't coat properly (Army Painter Greedy Gold) and a small mould line I'd missed. Aarrgghh.


Drybrushing accounts for the almost "dusty" look of the mini: 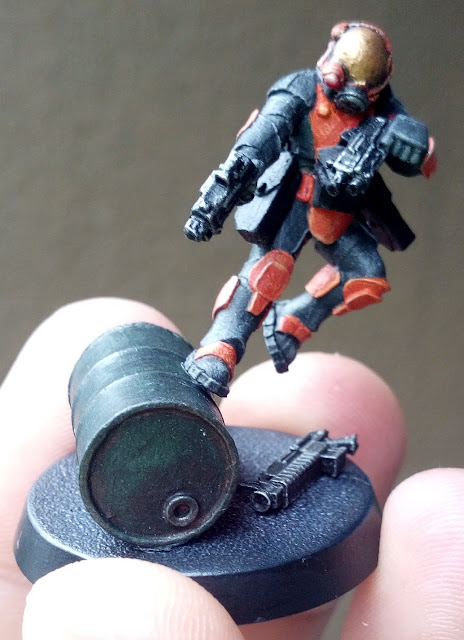 Anyway, one day I had an idea for a rebase.

Back when I started this hobby the first time, the idea of going back to a finished mini and redoing it was ridiculous. Did it really matter if my Ultramarines* were standing on bases that were only 10% covered in green sawdust? So what if I'd forgotten to paint the rockets in the rocket launcher? But for some reason, the idea of rebasing ol' Obes didn't seem that mad, especially when I remembered the oil drums. Or barrels, you decide. 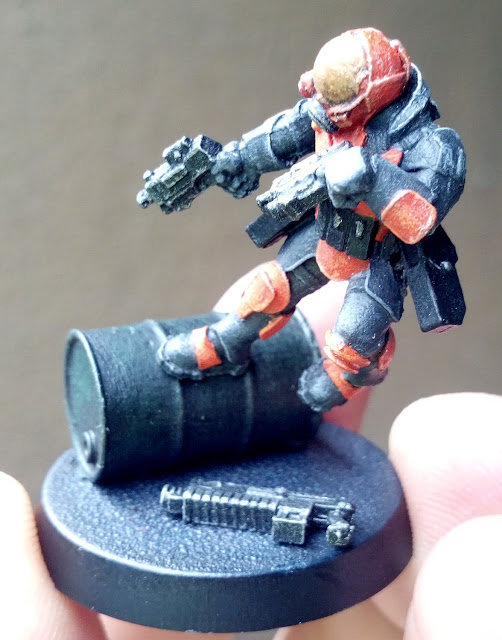 I got the oil drums from Debris of War, a British company that makes resin gaming accessories such as... well... debris. I got 12 for four quid and they're great. I know it sounds a bit odd singing the praises of small resin barrels, but in this day and age of sweatshop tat it's nice to see someone gives a toss about their craft. I thought Oberon would look good if he was leaping up on the barrel and firing down at someone/thing hiding behind it. A few coats of Vallejo Black Green and some washes with metallic black ink and the barrel was done and glued in place. Obes had a hole drilled in his foot and a short piece of paperclip inserted in it; another hole was drilled in the barrel and voila, he's held securely with the aid of superglue. A shotgun, also by RBJ, helped fill some negative space.

I happily placed him back on his shelf and he immediately fell over. I should have realised that the figure is totally out of balance. Luckily I'd used a 30mm base so was able to glue a pound coin to its underside: 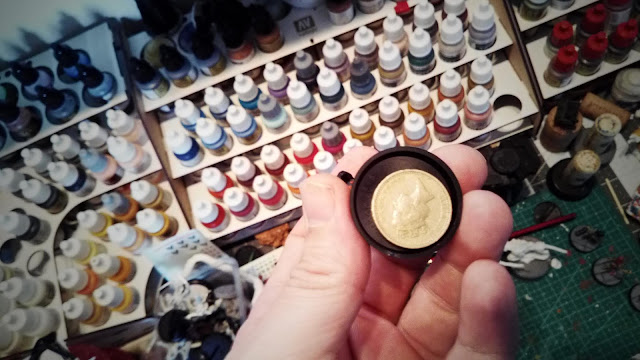 And balance is restored.

*A long time ago, Ultramarines were equals with the other "big three" Space Marine chapters — Blood Angels, Dark Angels (who replaced the Salamanders) and Space Wolves — in Games Workshop's affections. This is before the Ultrasmurfs began appearing on every White Dwarf, novel, rulebook, boxed set, poster, movie and store display. So picking the boys in blue in 1989ish wasn't what it is now: the equivalent of deciding to support Liverpool in 2020.
Labels: basing, debris of war, games workshop, miniatures, rbj games, space marines, vallejo