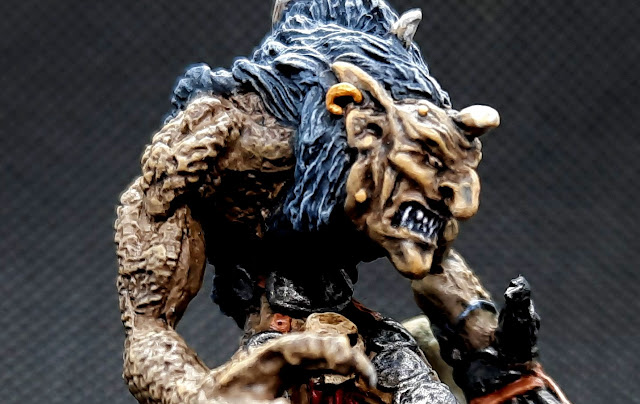 Man, I wish I'd found this chap in time for Monster May(hem). Oh well.

I bought this troll back in 2019 after spotting it while browsing Armorcast's site. I thought it was a pretty cool sculpt and began painting it immediately, until it became another one of those minis that just ends up getting chucked into the Magical Box of Unloved Lead for some reason.

I found him while looking for something to paint yesterday. He looked pretty forlorn, with just a coat of white primer, his hair painted black and his body half-covered in a crappy layer of Heavy Black Green. I decided he'd make an ideal way to spend a couple of hours given I woke up at 6am. He's such a gnarly sculpt that I thought he was designed by Bob Olley, but it's actually by Clint Staples.

I googled "black troll render" as I have no idea what one is, and according to d20pfsrd.com, "these trolls are a cut above a common troll in terms of combat ability, but even less intelligent. They wear armor made from the hides of creatures they hunted and killed". I assume the "render" bit refers to his clawed metal gauntlet. 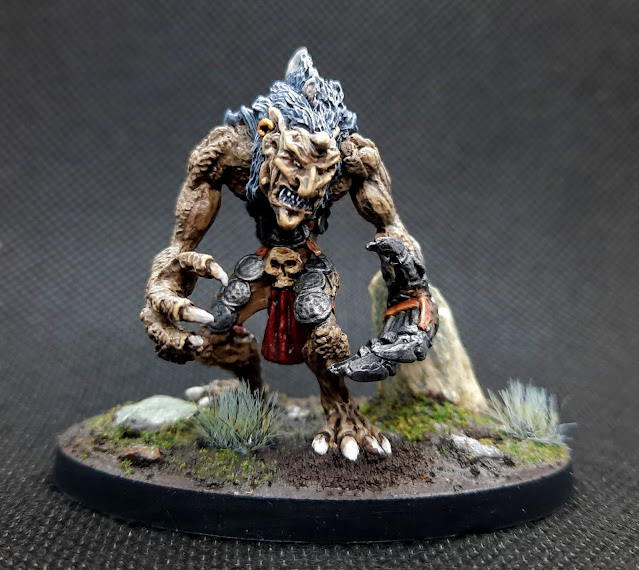 After painting the Marsh Troll and Rocky green, Reddit green-blue and Largulp in flesh tones, I wanted to go in a different direction with this guy. I contemplated black/grey but in the end I picked up my pot of barely-used Forest Flesh, which happily covered the green in only a couple of thin coats. 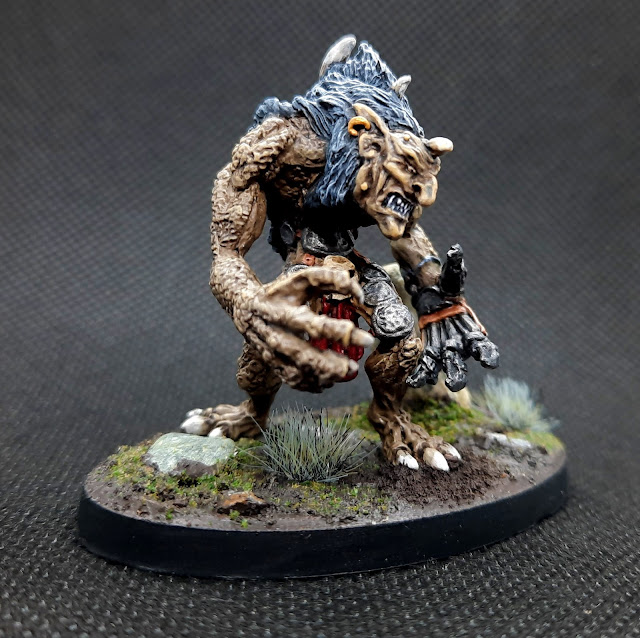 I shaded the skin with Agrax Earthshade, which did a great job of pulling out all his scaly details. Once dry I mixed some Ivory into the Forest Flesh and drybrushed it on, and then added more Ivory and went over it again. With his skin basically done I turned my attention to all the metal bits, including the nasty-looking gauntlet, painting them Stormy Grey followed by a coat of Iron Warriors and a wash with Nuln Oil. A light drybrush with Plate Metal brought out the details.

His claws, nails and horns were done with Bone Shadow, Bonewhite and Seraphim Sepia, with some more Ivory for the final highlights. The human skull decorating his groin was painted the same way, and his loincloth is Black Red and Khorne Red. 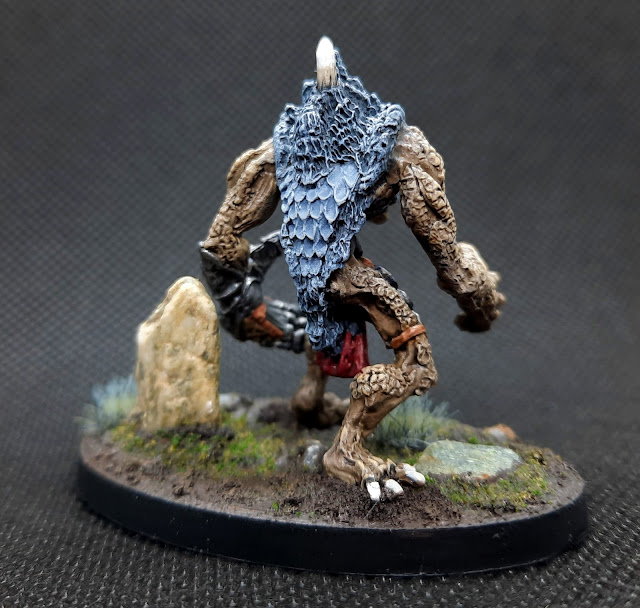 I have no idea what this scaly thing is so it just got painted Black Grey, along with all the rest of his hair. It was drybrushed with Stormy Grey, Blue Grey and a touch of Ghost Grey. The straps holding on his armour were given a coat of Orange Brown and highlighted with Light Brown. 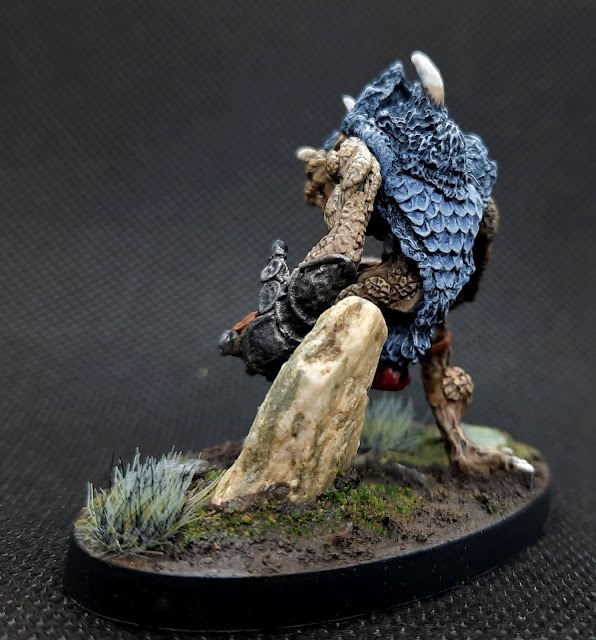 He's basically done but I wanted to add a lighter tone to the most raised areas of his skin, so I cracked open my pot of Ungor Flesh to go over his upper arms and face. 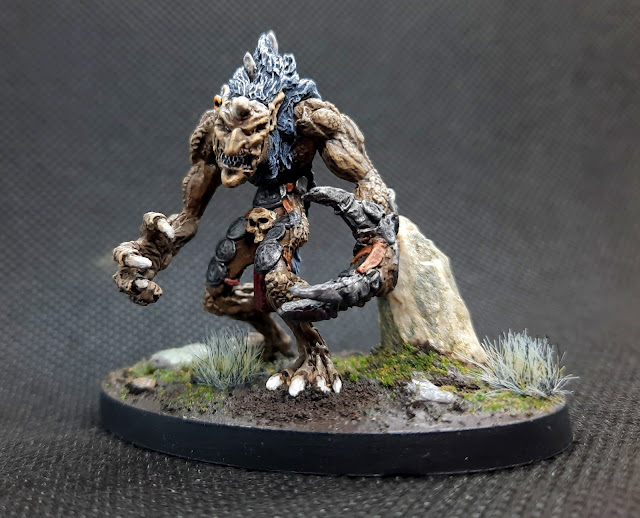 I used another oval base to tie him in with the Marsh Troll and Largulp. After covering it with modelling paste and sticking in some stones, I covered it with Stirling Battlemire as I wanted a muddy look. While the mud dried I mixed up some different flock colours and then sprinkled them over random daubs of PVA. A couple of tufts and the base was finished, and it looks pretty good, suitably bleak and desolate. 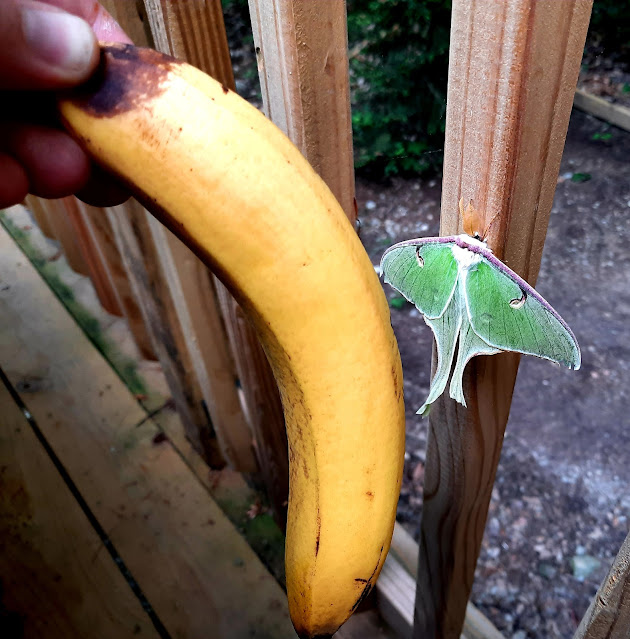 We had a cool visitor yesterday morning — a luna moth hanging out on our deck. It didn't move for ages, so I had time to get my phone and a banana for scale, and grab a photo. They really are beautiful creatures.