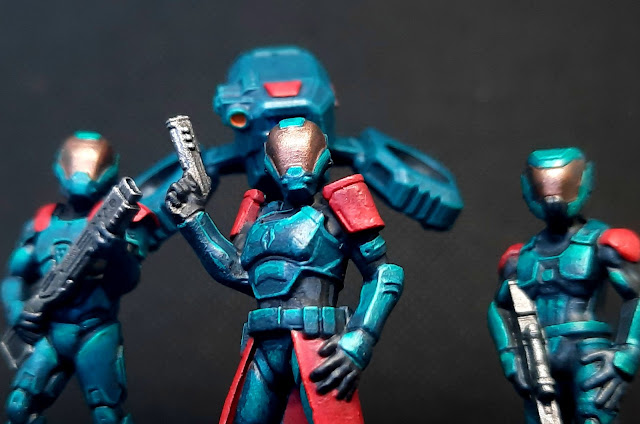 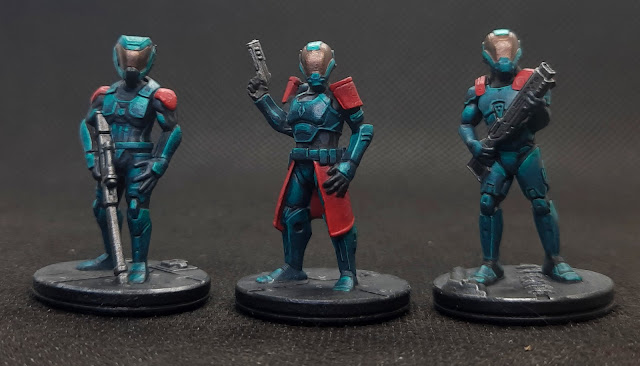 When I saw this trio I had to get them. I don't know what a Harmony Alliance Patrol is, why they're harmonious, what they're allied with or where they patrol, but for $7 I snapped them up.
There's some cool pop culture influences on these figures. The guy on the left is straight out of Doom, they all have a touch of Halo about them, and the middle one's skirt thing is a nod to Boba Fett.
I wanted to get away from the brighter colours I've been using on the aliens so I went for Incubi Darkness as a basecoat over black primer. Then it was just a case of adding Emerald Green and layering it on for the highlights, and then using the pure colour for the edges of the armour plates.
The red is my usual Khorne Red/Flat Red/ Vermilion recipe. For their visors I used Tinny Tin over a Mahogany Brown basecoat, glazed with some thinned Carroburg Crimson.
The only bits I'm disappointed with are the weapons. I couldn't think of a decent futuristic colour scheme so I just went with Plate Metal and Nuln Oil. Their integral bases are painted the same way. 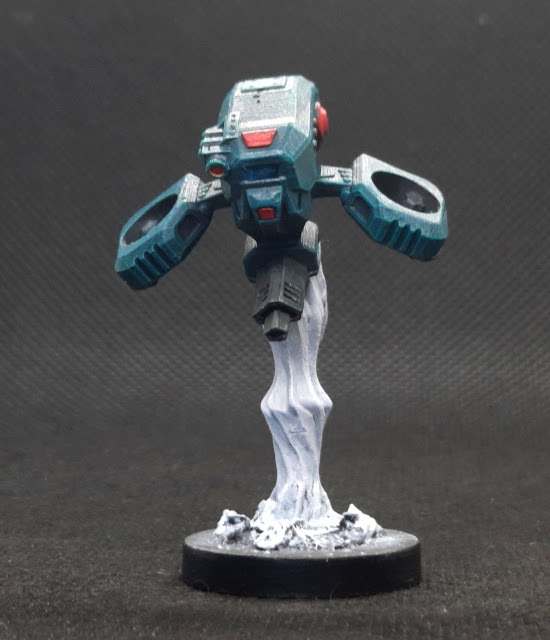 The drone was a freebie because my order was delayed, and you can't argue with customer service like that. It's an awesome little sculpt and I just painted it up in the same colours as the patrol members. Then the question of basing arose. It comes with a basic flight stand but I don't like those, so I hunted around for something else I could use.

I found some more turrets at Dollar Tree the other day, only these are alien ones with missiles that have a biological look to them. I cut the end off one, glued it to a 25mm base and painted it with Ghost Grey and Off-White to (hopefully) make it look like smoke. I added some modelling paste to the bottom as if the smoke is spreading out, and then stuck the drone to the top. It sort of works, and it's a lot better than the usual transparent plastic pole.

There is scenery coming soon, honest!