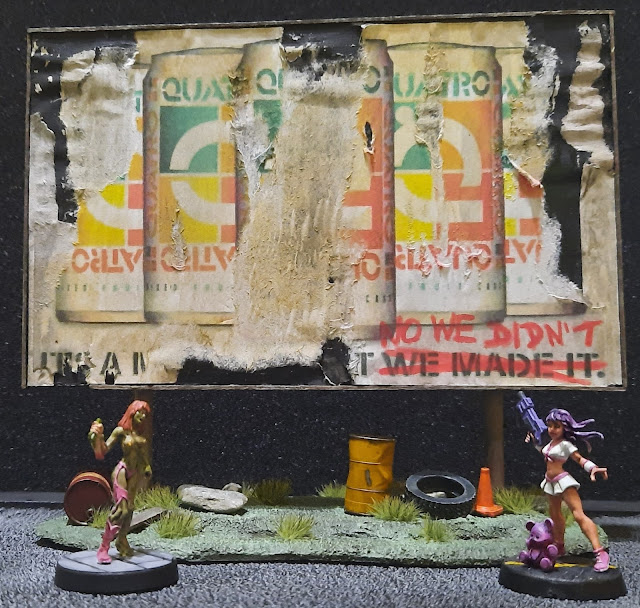 One great thing about this build was that I barely used any actual model paint; it was mostly done with craft paints. I have to admit that I used to look down on cheap acrylics, but for doing large bits of scenery they're excellent, especially at 55 cents a bottle rather than the usual $3.50 for a pot of Vallejo. Anyway, here we go.

I had a problem working out how large the actual board should be. Scale is one of the things that I struggle with, and it frequently holds me up when making scenery because I worry (way too much) about building something that will look too small or too large. I hunted around online and found some 3D prints of 28mm-scale billboards that helpfully provided their dimensions. If anyone's interested, it's 15cm long by 10.5cm tall. So the first thing to do was to cut a rectangle of foamboard and use coffee sticks to frame it. 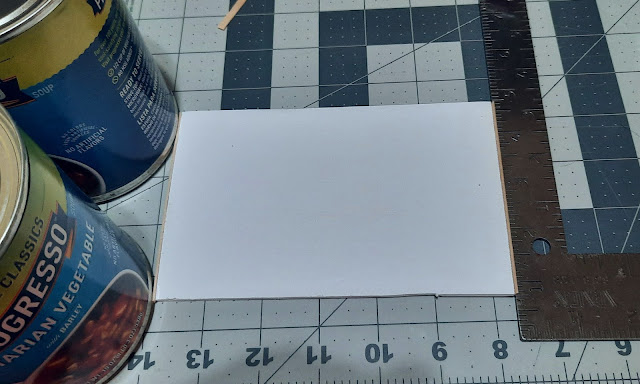 The first two sticks are glued on and held in place with two tins of soup and my metal ruler thingy (yes, I know they have names but I'm drawing a blank). You can see at the bottom where I sliced into the board a bit too much, but as it's meant to be damaged I'm not too bothered. I added two more sticks to the top and bottom and left them to dry. 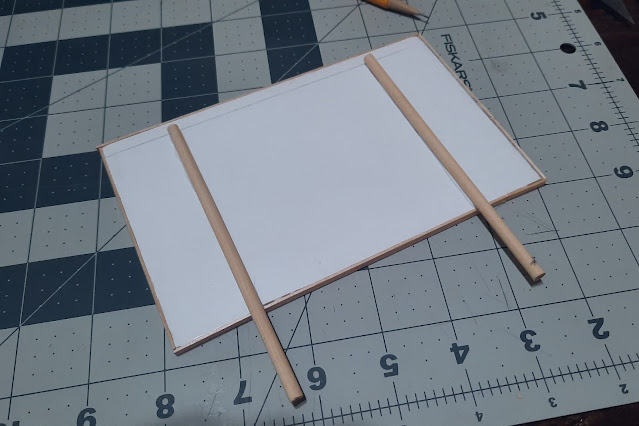 Once dry I cut a wooden dowel into two 13cm lengths and glued them to the back with PVA. Hopefully I drew the guidelines straight... 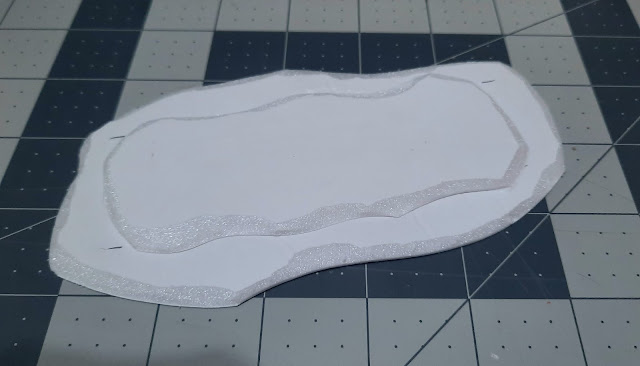 I cut up more foamboard to make the base, and like my barricades I carved off the straight edges to make a bit of a slope. I stuck the top bit down with more PVA and put a can of soup on top to weigh it down. After it dried I pushed the signposts into the foam to mark where they'd go, and used my Xacto knife to gouge holes. 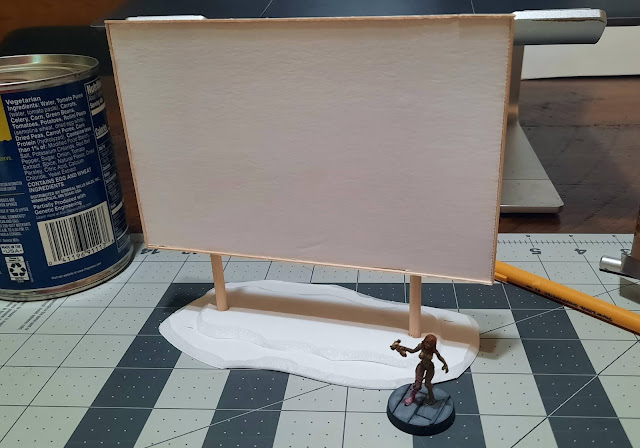 Here it is with the sign put in position but not glued in. Mercedes is there for scale, and at this point I'm thinking, "This is too big". After googling around it looks like the standard real-life size is 25 feet by 13 feet. Assuming Mercedes is six feet tall, it's just over four Mercedes long and two Mercedes high, so in real life mine is five feet too tall. I could have trimmed the height to 8cm, but it'll be OK. 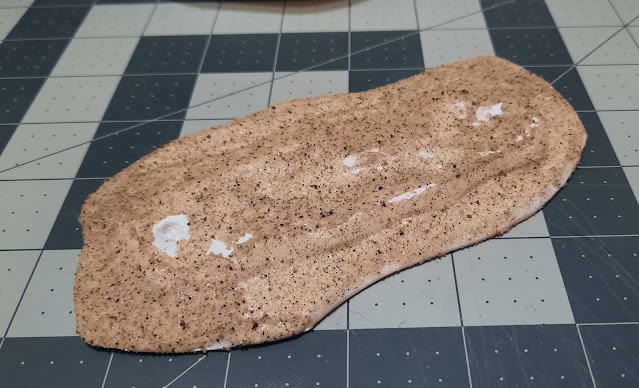 The inevitable sanding. The base was plastered with PVA and sand, and put to the side to dry. I have to admit, waiting around for PVA to dry is a downside to making scenery. When it finally dried I painted it Marshy Green and gave it a once over with homemade green wash. 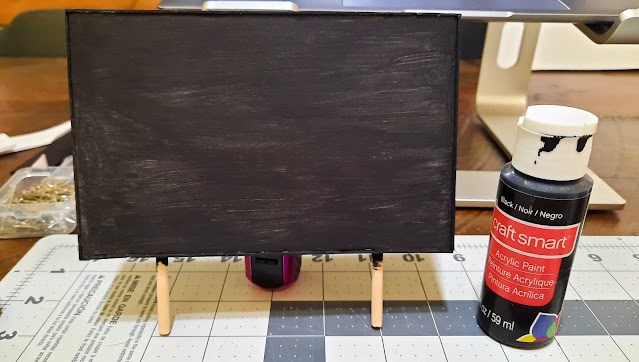 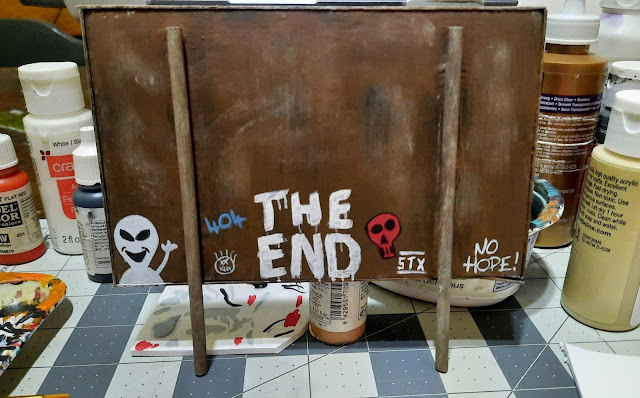 While the wash dried, I got on with the board. I painted it with Black craft paint and then two coats of Nutmeg, which was roughly applied to give it a bit of a weathered look. After that the back got a couple of coats of homemade rust wash and a drybrushing with Khaki. The base was still drying so I graffiti'd the back with some random crap.

The base, which I totally neglected to take pics of while painting it, was given a coat of English Ivy craft paint, shaded with homemade green wash, and drybrushed with Marshy Green and Granite Grey craft paints. Then it was given another coat of green wash and some random dabs of Burnt Umber wash, which took ages to dry. 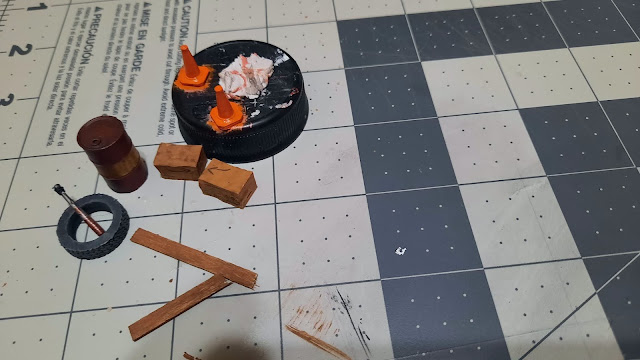 Look at the composition of this photo. It's just... there. Anyway, while waiting for the washes to dry I got on with painting some crap to go on the base. I finally had to crack open some Vallejo paint for these. Two boxes, two traffic cones, some planks of wood, an oil drum, a tyre and the bloodied baseball bat I was going to use with my convenience store make for some good additions to the base. 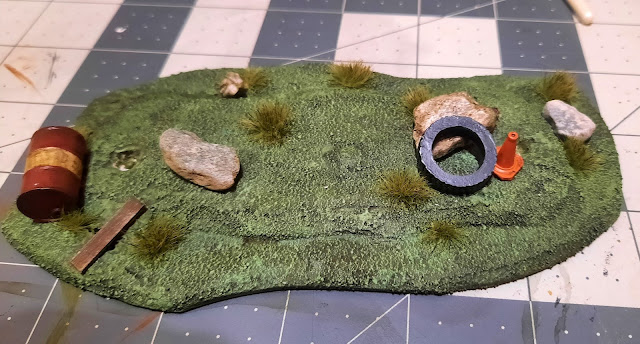 I ended up not using the boxes and went with some small stones from my drive. I could not be bothered painting them to look like rocks, so I just gave them a once-over with matte varnish and glued them in place. Some tufts were randomly stuck on and I'll add a couple more to hide where the posts fit into the base. My big thing was whether to use flock, and I decided against it and just went with the painted sand.

Then came the bit I wasn't looking forward to: the actual poster. I can't freehand a convincing design, so I hunted around online for a suitable image. I wanted something a bit retro, and then I remembered Quatro. It was a soft drink in the UK that came out in 1982. I loved it, partly because of the cool looking cans and partly thanks to this TV advert, which 11-year-old me thought was the early-80s equivalent of AWESOMENESS:

I found an image, downloaded it, mucked about to get it to the right dimensions, added some text and printed it. 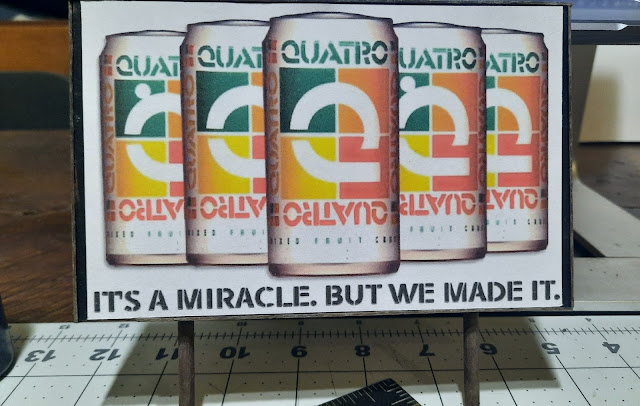 And it's too narrow! That's an easy fix. Using tacky PVA I glued two narrow strips down each side, then stuck the poster on. Now to weather it up a bit. 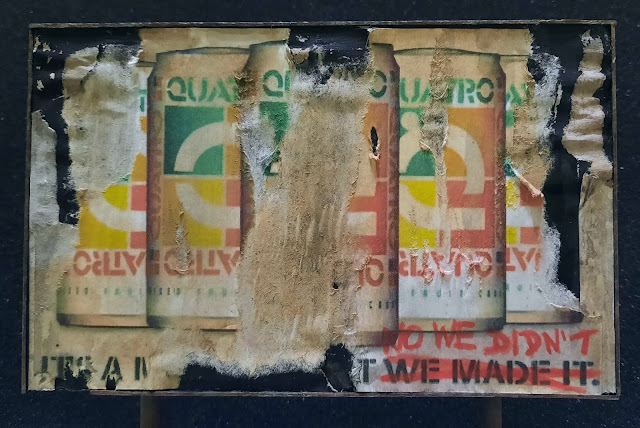 Oooh I had fun doing this. After giving the glue time to stick but not dry, I got my Xacto knife and began running the whole edge of the blade downwards to scrape off the printed part of the poster and leave the white paper. I really wanted to make it look like the poster had fallen apart after months of exposure to the elements. After tearing off enough, I daubed the whole thing with very watered-down black, brown and orange washes to dirty it.

I wanted to add some depressingly ironic graffiti and thought about painting "THAT'S ALL, FOLKS!" across it in red. But why would anyone fanny around doing that in a zombie apocalypse, and how would they get up there? I can't make a ladder. So I tore off most of the words across the bottom and added "NO WE DIDN'T" above "WE MADE IT" in Bright Red craft paint. I glued the posts into their holes with PVA as I was worried superglue might melt the foam, and left it overnight to dry. After that it was just a case of painting the extra glue blobs Marshy Green and adding some more tufts. The centre of the base looked empty so I added the yellow oil barrel. 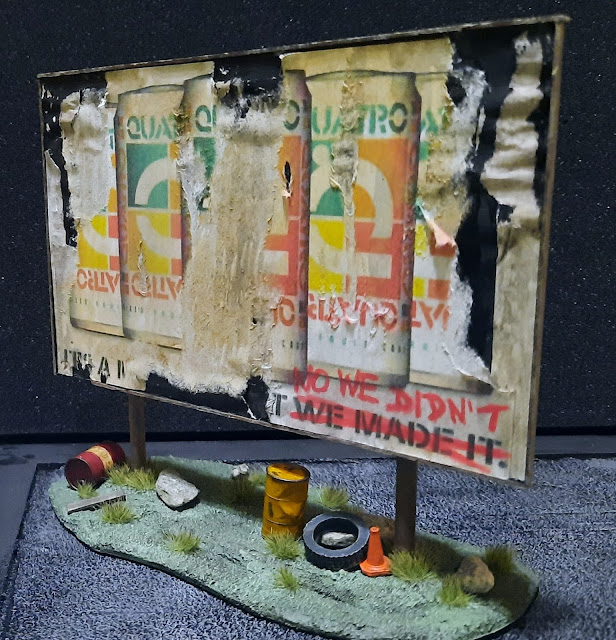 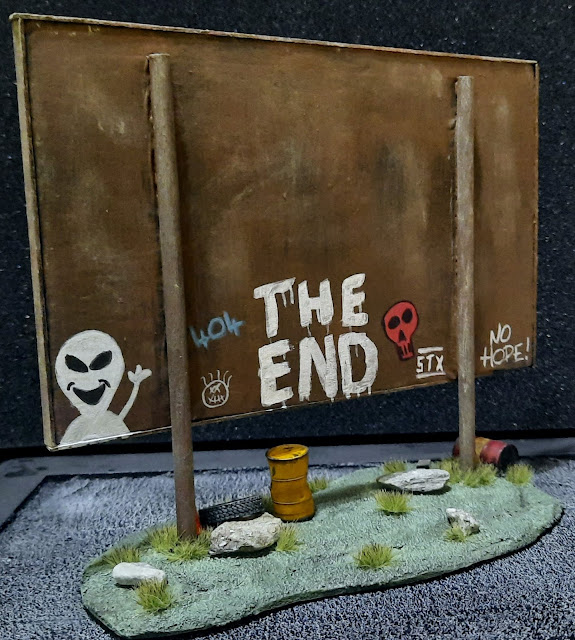 And it actually looks really good. A bit big, to be sure, but still effective. I should have weathered the front the same way as the back before putting the poster on, but I can live with it. The only other thing I should have done is add a third level to the base to give the posts a bit more foundation depth. It does wobble a bit. Right, on to something else...