After finishing my new building I got into a bit of a scenery kick and knocked out these Reaper models over the past few days. They were relatively straightforward thanks to the magic of spray paint.

I've owned all three of these pieces for a while; I've had the dumpster since May 2020 and it's my third after this one and this one. I've got a fourth dumpster floating around somewhere and it's on my to-do list. The two containers were bought just before Christmas. 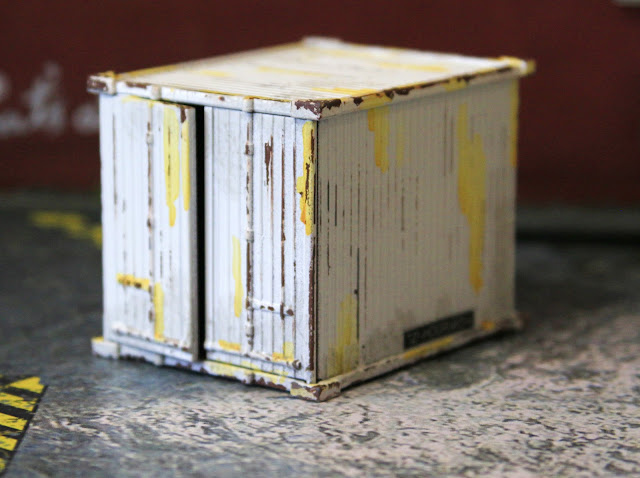 All the pieces were painted the same way: spray with a red-brown primer, daub Vallejo Liquid Mask on randomly with a bit of sponge, spray on the top coat and then rub off the paint over the mask. It's the same process I used with the Mustang I did for Apocalypse Now last year.

This 10-foot container was easy to glue together, and I left one of the doors slightly open to give it a slightly creepy air. After the white coat was scraped enough, I used a brush to add Vallejo Rust, which is orange, to some areas, then dirtied it a bit with a sponge dipped in Grey Wash. The final touch was to add some Citadel Casandora Yellow wash to discolour it a bit, but in hindsight I'm not sure that worked.

The transfer across the bottom of the side is the serial number from a sheet of graffiti decals. And I'm 99% sure the doors are on upside down... 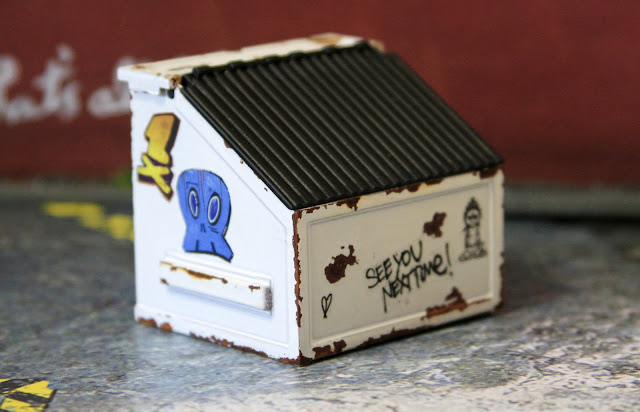 I went a bit all-out with the decals on the dumpster. I used white again as the transfers are printed on transparent paper, so without white behind them they're just see-through. Once again the use of Liquid Mask really helped get a realistic rust effect, although I buggered up a bit by forgetting to put it on the top white piece so I had to use Vallejo Dry Rust paint to fix that mistake. The lid was sprayed black and just highlighted with some Black Grey.

I really like these Reaper dumpsters. They're a doddle to assemble and paint, look good, and are a must for any post-apoc cityscape. 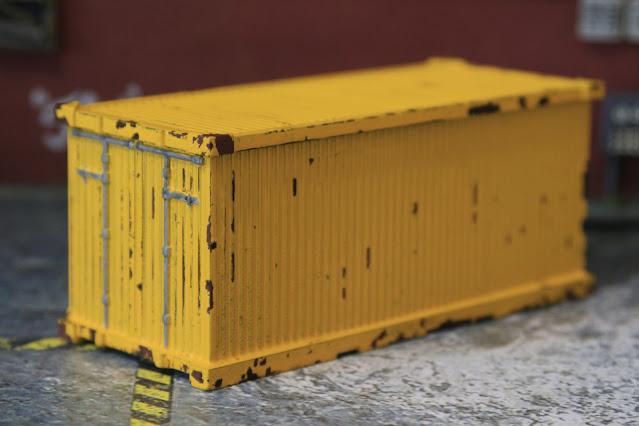 This is my second large shipping container after the one I painted for last year's Season of Scenery. It turned out not as well as I'd hoped, which is down to the yellow paint. I bought some deep yellow spray paint a week ago for a project I'm hoping to start on soon. Unfortunately I could only get it in gloss, but I figured I could just spray over it with matte varnish. Easy, right?

Well, despite shaking the can for a solid two minutes and giving the container two coats, it's a real mess. Either the paint wasn't mixed properly or it just wouldn't cover the dark red-brown primer. It's also cracked in a few areas. And even after two days it was still slightly tacky, so I sprayed the varnish over it... and immediately remembered that I had yet to scrape off the yellow paint. Awesome.

I tried using my fingernails to remove the paint, but no luck, so I switched to the blunt side of an X-Acto blade. It worked, but worked too well in some places, taking the paint right back to the plastic. I had to touch up several spots with Dry Rust, and although the cracked paint adds to the worn look, it doesn't bode well for my project that needs yellow spray.